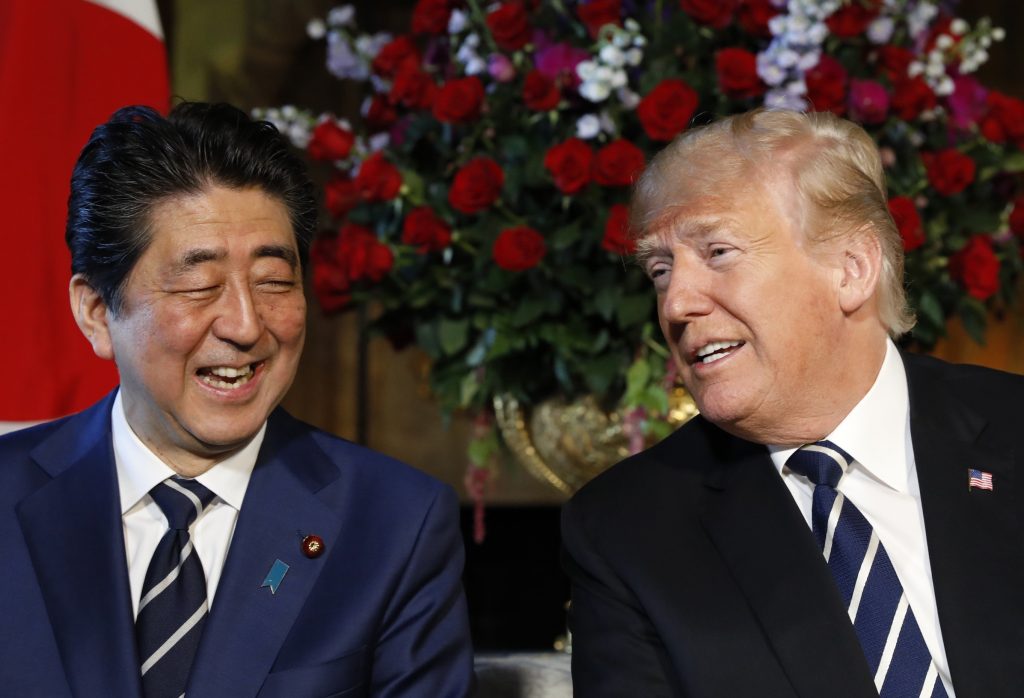 President Donald Trump said Tuesday that the U.S. and North Korea are holding direct talks at “extremely high levels” in preparation for a potential summit with dictator Kim Jong Un.

At Mar-a-Lago with Japanese Prime Minister Shinzo Abe, Pres. Trump also confirmed that North and South Korea are negotiating an end to hostilities before next week’s meeting between Kim and South Korean President Moon Jae-in. The meeting will be the third inter-Korean summit since the Koreas’ 1945 division.

“They do have my blessing to discuss the end of the war,” said Pres. Trump, who welcomed PM Abe to his Florida resort on Tuesday.

Pres. Trump is looking to hold his own summit with Kim in the next two months and said five locations are under consideration. The proposed summit follows months of increasingly heated rhetoric over the North’s nuclear weapons program.

“We’ll either have a very good meeting or we won’t have a good meeting,” he added. “And maybe we won’t even have a meeting at all, depending on what’s going in. But I think that there’s a great chance to solve a world problem.”

The president did not answer shouted questions about whether he has spoken with Kim.

Kim ‘s offer for a summit was initially conveyed to Pres. Trump by South Korea last month, and the president accepted. U.S. officials have indicated over the past two weeks that North Korea’s government has communicated directly with Washington that it is ready to discuss its nuclear weapons program. The officials also said discussions between the two sides are being held in preparation for a summit.

PM Abe, who has voiced fears that short- and medium-range missiles that pose a threat to Japan might not be part of the U.S. negotiations, praised Pres. Trump on Tuesday for his bravery in agreeing to meet with the North Korean dictator.

“I’d like to commend Donald’s courage in his decision to have the upcoming summit meeting with the North Korean leader,” PM Abe said.

Pres. Trump took credit for the inter-Korean talks, saying, “Without us and without me, in particular, I guess you would have to say, they wouldn’t be discussing anything.”

North Korea has long sought a peace treaty with the U.S. to formally end the 1950-53 Korean War. It is unusual for the North to seek to broach the issue directly with South Korea rather than with Washington itself. The armistice that ended the fighting was signed by the United Nations Command — the U.S.-led forces in the conflict, North Korea and China. South Korea was a member of the U.N. Command but was not a direct signatory.

The U.S. has traditionally sought to resolve the dispute over North Korea’s nuclear weapons program before addressing the North’s demands for a peace treaty, which the isolated, authoritarian nation views as a means to ensuring its security. The U.S. retains nearly 30,000 troops in South Korea to deter North Korean aggression. The leaders of the two Koreas are due to meet April 27 on the southern side of the tense, demilitarized zone that separates them.

The Abe summit will serve as a test of whether the fond personal relationship the two leaders have forged on the golf course and over meetings and phone calls has chilled following Pres. Trump’s recent moves, including his decision not to exempt Japan from new steel and aluminum tariffs.

The official visit began Tuesday afternoon as an honor cordon of uniformed service-members lined the palm-fringed drive to the club. Pres. Trump greeted PM Abe at the red-carpeted door of the mansion as the pair posed for photos ahead of a planned one-on-one meeting. It will be followed by a small group discussion with top national security officials focused on the Kim summit. The president and first lady Melania Trump will also have dinner with PM Abe and his wife.

On Wednesday, the agenda will broaden to include other issues affecting the Indo-Pacific region, including trade and energy, and Trump said he and Abe would “sneak out” to play a round of golf. Trump and Abe will also hold a news conference before the president and first lady host the Japanese delegations for dinner. Abe will return to Japan on Thursday morning.

The first time Pres. Trump hosted Abe at Mar-a-Lago — shortly after the inauguration — North Korea conducted its first missile test of the Trump administration, and the two delivered a joint statement denouncing the launch.

PM Abe will be seeking reassurance from Pres. Trump that security threats to Japan won’t be overlooked in the U.S.-North Korea summit.

“I don’t think that Prime Minister Abe will leave Mar-a-Lago with anything other than a high degree of confidence in the health of the alliance, including as we go into the summit with the North Koreans,” said Matthew Pottinger, the National Security Council’s senior director for Asian affairs.

Both sides insist that Pres. Trump and PM Abe remain close. U.S. officials stressed that Pres. Trump has met with PM Abe more than any other world leader and say they’ve been in “constant contact” since Trump accepted Kim’s invitation.

PM Abe said he had secured a commitment from Pres. Trump to raise with Kim the issue of Japanese abductees, one of his top policy priorities. Pyongyang has acknowledged abducting 13 Japanese, while Tokyo maintains North Korea abducted 17. Five have been returned to Japan. North Korea says eight others died and denies the remaining four entered its territory. Japan has demanded further investigation.

The U.S. itself is pushing for the release of three Americans.

After five years in office, PM Abe is one of Japan’s longest-serving, post-World War II prime ministers, but has suffered plummeting poll ratings over allegations that a school linked to his wife received preferential government treatment in a land sale.