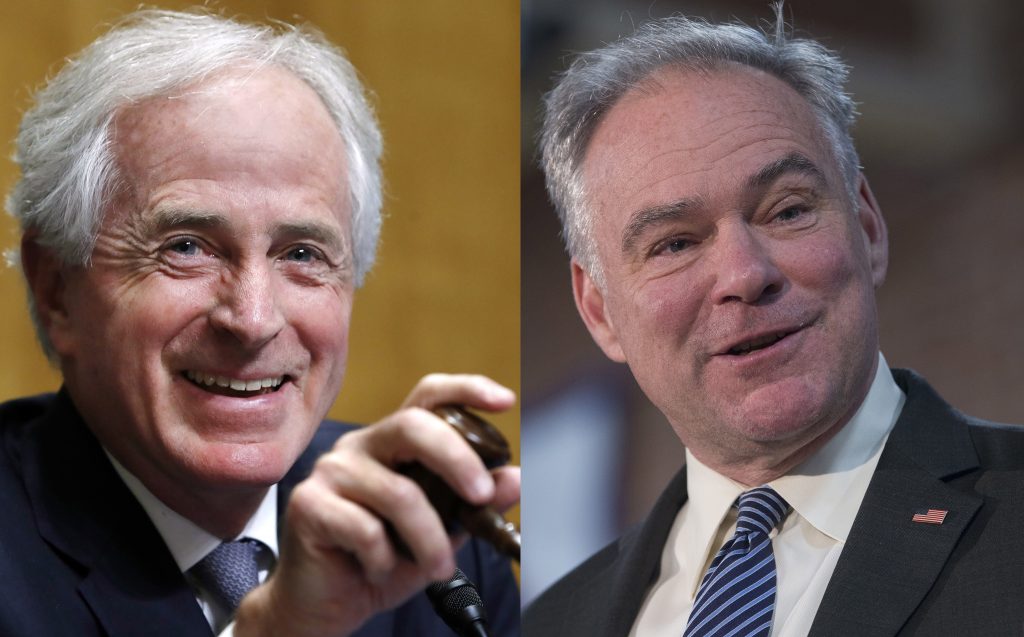 A new resolution from leaders on the Senate Foreign Relations Committee to authorize the use of military force overseas is accelerating a debate that Congress has been reluctant to have, but that’s taking on new urgency after President Donald Trump’s strikes on Syria.

The bipartisan measure from Sens. Bob Corker (R-Tenn.) and Tim Kaine (D-Va.) would repeal the broad authorizations Congress approved in 2001 and 2002 for the wars in Afghanistan and Iraq, replacing them with new authority to go after specific “non-state terrorist groups.” A growing number of critics say Congress should no longer be using the more than decade-old resolutions as legal underpinnings for the fight against terrorist groups such as the Islamic State group.

The new resolution would not provide congressional authorization for the airstrikes Trump ordered, with coalition forces, in response to an alleged chemical weapons attack against civilians in the Damascus suburb of Douma.

House Speaker Paul Ryan said Tuesday that Trump already has existing authority for limited strikes in Syria and the GOP leader panned the bipartisan Senate effort, declining to commit to a House vote.

Ryan said his criteria for supporting a new authorization for military force resolution is, “Can an AUMF make it into law and does it tie the hands of our military behind their backs?”

Congress has so far given lopsided backing for the Syria mission. Many lawmakers are supportive of strikes that send a message to the Syrian regime that such attacks will not go unanswered.

“It was time to act,” Senate Majority Leader Mitch McConnell (R-Ky.) said Monday in support of the Syria mission.

Others say even the limited response is beyond the president’s commander-in-chief authority because the U.S. was not facing a direct security risk.

Mostly, lawmakers have insisted that the Trump administration cannot engage in prolonged or repeated incursions without consulting Congress on its broader strategy.

“President Trump’s action still raises the constitutional question of his authority to unilaterally attack another nation without congressional authorization,” said Sen. Dick Durbin (D-Ill.). “It is time for Congress and the American people to engage in a national debate about that authorization to use military force in Afghanistan, Iraq, Syria and Yemen.”

Sen. Mike Lee (R-Utah) said, “No President of the United States, no matter party or political ideology, has the authority to unilaterally start a war.”

But it is not at all clear the new authorization resolution unveiled Monday, which is expected to focus on military action against non-state actors like the Islamic State, al-Qaida and the Taliban rather than specific countries, would find enough support to pass the House or Senate.

Corker said the new measure would give the administration “the flexibility to be successful that they now have, but it also keeps Congress in the loop in having the ability to stop it.”

It has a built-in process for Congress to review the authorization every four years. But because Congress has shown such difficulty tackling war-related votes, skeptics worry it would just end up stretching on for years, like earlier authorizations, if Congress failed to act.

“I’m not opposed to what they’re trying to accomplish,” said Sen. Ben Cardin (D-Md.), who also serves on the committee. “I’m opposed to doing it in a way that could lead to what happened in 2001.”

For all the handwringing over military incursions like the weekend strikes Trump ordered on Syria, Congress has been hesitant to wade into a messy debate and take responsibility for the campaigns. In 2013, Congress returned early from summer recess to consider then-President Barack Obama’s request for action against Syrian President Bashar Assad after a similar chemical weapons attack near Damascus. But lawmakers quickly lost interest and did not vote to resolve the issue. Trump’s actions have similarly paralyzed lawmakers.

Congress, though, may face increasing pressure, particularly in a midterm election year when voters are hungry for a check on executive power.

A coalition of liberal and libertarian-leaning lawmakers, who have long pushed Congress to vote on authorizing military operations, is drawing wider support from other more moderate voices who want Congress to re-assert its constitutional role over the executive branch.

The committee is expected to consider the legislation next week, but Republican leaders have shown only tepid interest in bringing it forward for Senate votes.

“Congress has abdicated the power,” Sen. Angus King, the Maine independent who caucuses with Democrats, said over the weekend on CNN. “What I guess I have to say now we’re really good at, is standing on the sidelines, avoiding making the decisions, and then criticizing the decisions the president makes.”