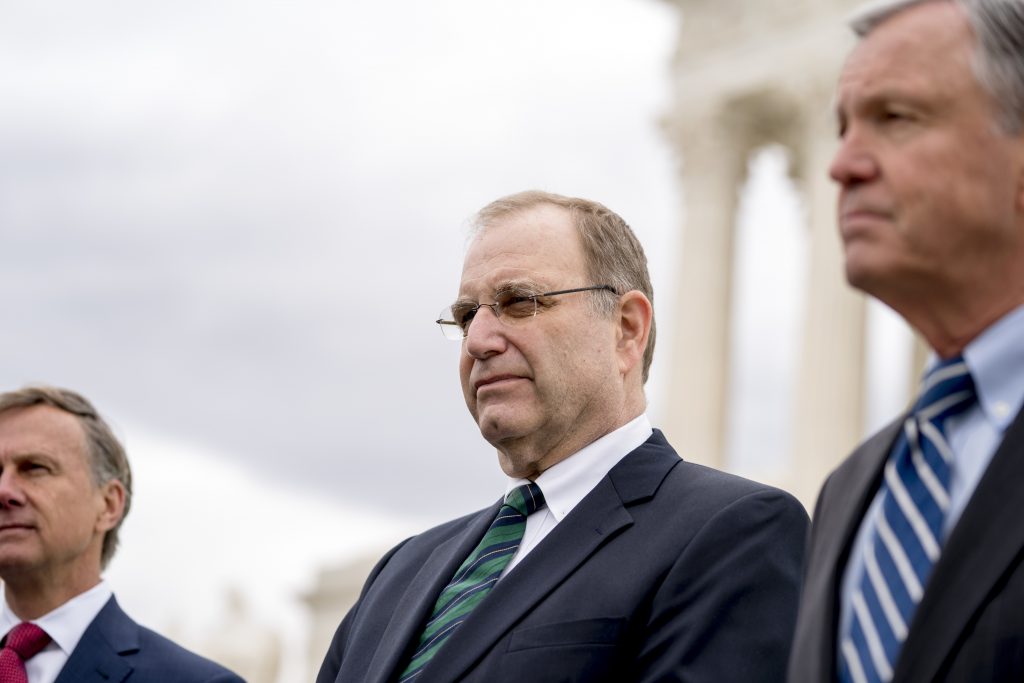 U.S. Supreme Court justices signaled they are divided about whether to let states start collecting billions of dollars in sales taxes from internet retailers that don’t currently charge tax to their customers.

Hearing arguments in Washington Tuesday in a South Dakota case, the justices considered overturning their 1992 ruling that made much of the internet a tax-free zone by exempting retailers that don’t have a physical presence in a state.

States and traditional retailers say the ruling, which involved a mail-order company, is obsolete in the e-commerce era. Broader taxing power would let state and local governments collect an extra $8 billion to $23 billion a year, according to various estimates.

“Anyone who wants to sell in-state, whether an in-state shop, an out-of-state shop, everybody is treated to the same tax collection obligation,” Ginsburg said.

The question is whether that group can win over a fifth vote. Justice Sonia Sotomayor indicated she would rather leave it to Congress to overturn the Quill ruling. Sotomayor said the real problem for states was not Quill but the absence of a mechanism for collecting the taxes directly from consumers.

“So find a way to collect from them,” she told South Dakota Attorney General Marty Jackley.

The high court fight centers on a South Dakota law enacted with the explicit aim of overturning Quill. The state is suing Wayfair, Overstock.com and Newegg, which don’t collect taxes in South Dakota.

Amazon.com, the biggest online retailer, isn’t directly involved. When selling its own inventory, Amazon charges sales tax in states that impose one, but about half of its sales involve goods owned by third-party merchants. For those items, the company says it’s up to the sellers to collect any taxes, and many don’t.

Chief Justice John Roberts said Amazon’s tax collection efforts might be a reason not to disturb the Quill rule. He pointed to briefs filed in the case suggesting that the problem of uncollected taxes has “peaked.”

“E-commerce is expanding, and companies like Amazon account for a large part of that,” Roberts said. “But they’re already collecting in all 50 states.”

South Dakota is urging the court to ditch the “physical presence” rule and let sales taxes be imposed on any company with an “economic presence” in a state. South Dakota’s law would require retailers with more than $100,000 in annual sales in the state to pay a 4.5 percent tax on purchases.

Justice Samuel Alito said other states, if allowed, would be more aggressive. He raised the prospect that some would try to impose retroactive liability on retailers. South Dakota’s tax law applies only prospectively.

“Do you have any doubt that states that are tottering on the edge of insolvency and municipalities which may be in even worse position have a strong incentive to grab everything they possibly can?” Alito asked Justice Department lawyer Malcolm Stewart.

The Trump administration is backing South Dakota in the case, urging that Quill be overturned or at least limited to catalog sales.

Retailers fighting the state say they would be hit with heavy costs of complying with rules for thousands of products in thousands of cities, counties and even airports that serve as their own taxing jurisdictions.

Justice Stephen Breyer contrasted that argument with the contention of South Dakota and its allies that new software would make it easy for retailers to comply.

“Both are logical. How do I decide who’s right?” he asked George Isaacson, the attorney for Wayfair, Overstock and Newegg.

EBay and Etsy are among the companies opposing South Dakota’s law.

The issue centers on the so-called dormant commerce clause, a judge-created doctrine that bars states from unduly burdening interstate commerce without congressional authorization. Congress could overturn whatever the court decides, but legislative proposals have stalled in the years since Quill was decided.

Justice Elena Kagan suggested that Congress’s inaction since the Quill ruling might be a reason to leave it intact.

“This is a very prominent issue which Congress has been aware of for a very long time and has chosen not to do something about that,” she told Jackley, the South Dakota lawyer. “And that seems to make your bar higher to surmount.”