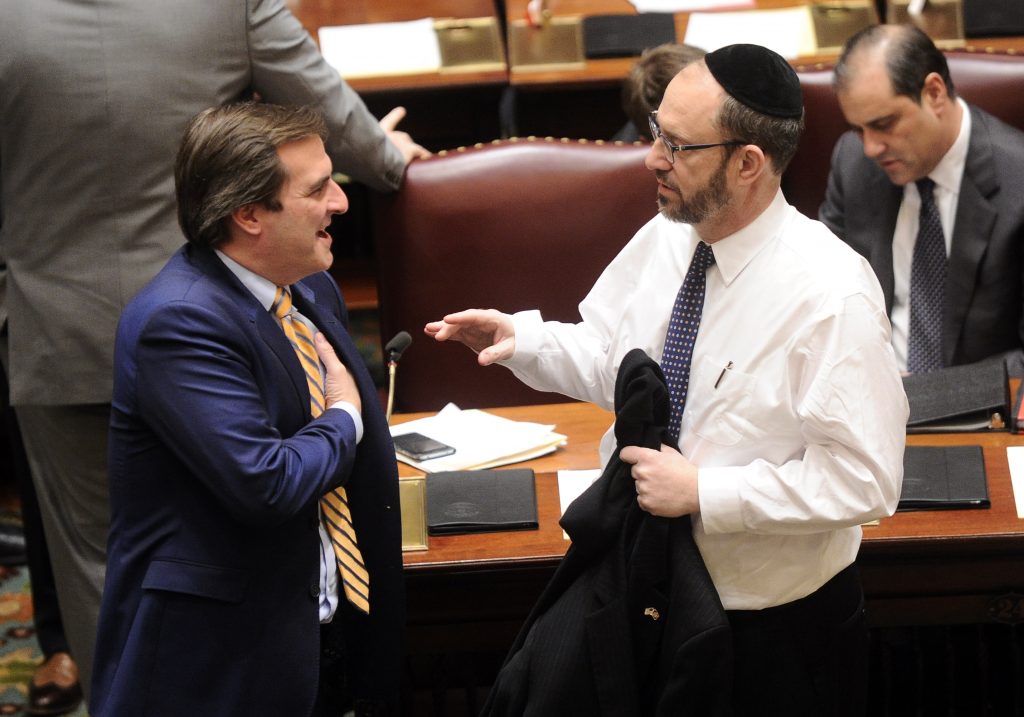 Hours before the breakaway Independent Democratic Conference in the New York state Senate reunited with the mainline party, Sen. Simcha Felder walked over to the Democratic half of the chamber.

“Don’t mess with me,” said the Brooklyn Democrat who caucuses with the Republican majority on Monday night. “I’m the real IDC.”

The room broke out in guffaws.

Felder is now the lone senator without a party, a description he told Hamodia last week was an apt commentary on his constituency in today’s political landscape. But with the Senate now almost evenly divided with 31 Republicans and 29 Democrats — with two special elections next week Tuesday that may throw the chamber into a razor-sharp 31-31 split — the Democratic party is applying pressure for him to accept their leadership.

The split began seven years ago after several months of Democratic majority rule resulted in infighting and assertions that they weren’t ready to lead. The schism helped give control of the chamber to Republicans.

Gov. Andrew Cuomo, buffeted by an unexpectedly strong primary candidate in progressive activist Cynthia Nixon, engineered the party’s reunion. His next step, the Daily News reported on Monday, was getting Felder back.

“With 32 elected Democrats, it should be done before the end of the session” in June, the News quoted a Cuomo source. “This puts pressure on Simcha Felder to have to pick a side, or be the reason the agenda is not taken up.”

One person close to Felder and familiar with the political atmosphere in the Senate laughed at the issues the Cuomo source was suggesting as enticements for Felder.

He said that Gov. Cuomo last spoke to the senator three weeks ago and the subject of returning to the Democratic party fold did not come up.

Felder told a City & State reporter on Monday that the News article was “inaccurate.”

The reporter “put together — you know, I don’t know if you ever buy a veggie burger that’s made of all the leftovers? That’s what that article was,” Felder said.

The party reunion Tuesday was anticlimactic. The eight members of the Independent Democratic Conference and mainline Democrats met briefly behind closed doors at the Capitol, a day after the IDC was formally disbanded at the start of Monday’s Senate session. Monday was the chamber’s first meeting after a two-week break that began immediately after the 2018-19 state budget was approved on March 31.

After the meeting there were no outward signs of any lingering animosity between the two Democratic factions after years of feuding, which included mainline Democrats blaming the renegade group for keeping progressive measures from gaining traction in the Senate. In fact, there was applause when the formerly rogue Democrats were welcomed back into the mainline, according to Sen. Michael Gianaris, who represents parts of Queens and Brooklyn.

Sen. Andrea Stewart-Cousins of Yonkers, the Senate minority leader, called the meeting “the biggest step” toward presenting a united front in the Senate.

“So I’m happy with this step, and we will take each step as it comes,” she said.

Democrats already have a big majority in the state Assembly. With the party holding the offices of governor, comptroller and attorney general, the Senate is the last bastion for those opposed to the Democratic agenda to block them.

Sen. Jeff Klein of the Bronx, who led the IDC and is now deputy minority leader, said Democrats will spend the second half of the 2018 legislative session attempting to pass measures that didn’t make it into the $168.3 billion state budget. Those priorities include voting reforms, cashless bail and the Dream Act, which would extend financial aid to students who entered the country illegally as children.

“Hopefully we’ll have a majority before we leave in June,” Klein said. “If not, we’re still united to make sure we win a Democratic majority” in the November elections.