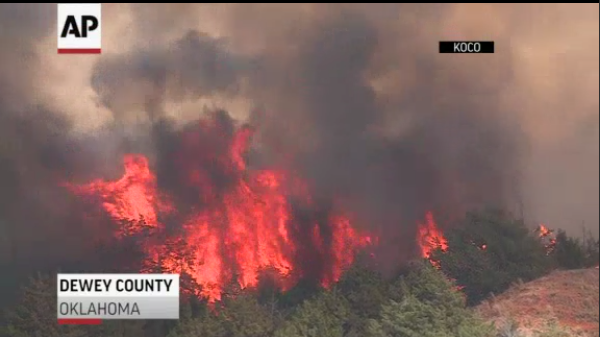 Forecasters warned of dangerous, life-threatening wildfire conditions in parts of the Southwest and Southern Plains on Tuesday as firefighters in rural Oklahoma battled blazes that have killed at least two people.

Gusty winds and low humidity in drought-stricken areas will create dangerous fire conditions in parts of Colorado, Kansas, New Mexico, Oklahoma and Texas, according to the Storm Prediction Center in Norman, Oklahoma. National Weather Service meteorologist Doug Speheger said such conditions haven’t been seen in at least a decade.

Temperatures are projected to reach the mid-90s, with humidity below 10 percent and winds gusting to 40 mph. The forecast includes northwestern Texas and the Texas Panhandle where firefighting aircraft are stationed in Amarillo, Abilene and surrounding areas.

In Oklahoma, two people have died in the fires and nine others have been taken to hospitals for smoke inhalation or heat-related injuries, emergency management officials reported.

Oklahoma Forestry Services reported Tuesday that the largest of the Oklahoma fires has burned more than 388 square miles near Leedey, and was about 3 percent contained about 110 miles  northwest of Oklahoma City.

Another fire has burned about 105 square miles near Woodward, about 20 miles north of the larger fire in Leedey, and is about 45 percent contained, according to the forestry service.

At the fire near Woodward, spokesman John Nichols said firefighters worked Monday to strengthen fire lines in preparation for the gusty weather Tuesday.

“The winds are coming, but wet weather is supposed to be coming too, and we’re hoping the wet weather will arrive,” Nichols said.

The weather service said rain and thunderstorm chances will increase Thursday night and Friday with strong to severe storms possible in southwestern Oklahoma and western north Texas on Friday.