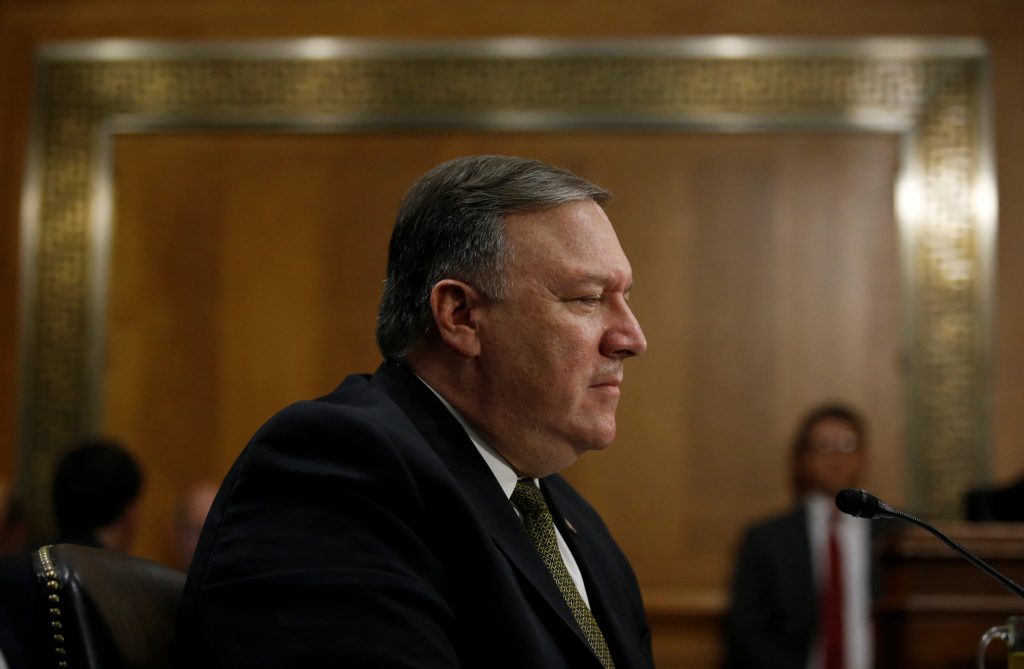 CIA Director Mike Pompeo made a top-secret visit to North Korea two weeks ago as an envoy for President Donald Trump to meet with that country’s leader, Kim Jong Un, according to two people with direct knowledge of the trip.

The extraordinary meeting between one of Trump’s most trusted emissaries and the authoritarian head of a rogue state was part of an effort to lay the groundwork for direct talks between Trump and Kim about North Korea’s nuclear weapons program, according to the two people, who requested anonymity because of the highly classified nature of the talks.

The clandestine mission, which has not previously been reported, came soon after Pompeo was nominated to be secretary of state.

“I’m optimistic that the United States government can set the conditions for that appropriately so that the president and the North Korean leader can have that conversation will set us down the course of achieving a diplomatic outcome that America so desperately – America and the world so desperately need,” Pompeo told the Senate Foreign Relations Committee last week during his confirmation hearing.

Speaking at his Mar-a-Lago resort on Tuesday, Trump appeared to allude to the extraordinary face-to-face meeting between Kim and Pompeo when he said the U.S. has had direct talks with North Korea “at very high levels.” The president didn’t elaborate.

Trump said that he would sit down with Kim probably in early June, if not sooner.

Pompeo has taken the lead on the administration’s negotiations with Pyongyang. His meeting with Kim marks the highest-level meeting between the two countries since 2000, when then-Secretary of State Madeleine Albright met with Kim Jong Il, the current leader’s father to discuss strategic issues. Director of National Intelligence James Clapper Jr. visited the country in 2014 to secure the release of two American captives and met with a lower-level intelligence official.

About a week after Pompeo’s trip to North Korea, U.S. officials said that officials there had directly confirmed that Kim was willing to negotiate about potential denuclearization, according to administration officials, a sign that both sides had opened a new communications channel ahead of the summit meeting and that the administration believed North Korea was serious about holding a summit.

“We have had direct talks at very high levels, extremely high levels with North Korea,” Trump said Tuesday during a bilateral meeting with Japanese Prime Minister Shinzo Abe at Mar-a-Lago, his winter resort.

Trump did not elaborate. The United States has no diplomatic relations with North Korea, but U.S. diplomats have visited and Washington has used several quiet channels to communicate with Pyongyang.

“North Korea is coming along,” Trump said. “South Korea is meeting and has plans to meet to see if they can end the war, and they have my blessing on that.”

Trump also said he has given “my blessing” to planned discussions between South Korea and North Korea about bringing a formal end to the Korean War, as fast-moving diplomatic developments surrounding nuclear-armed North Korea came into view.

Hostilities in the Korean War, which involved the United States, ended 65 years ago, but a peace treaty was never signed. A top South Korean official was quoted Tuesday as saying that a formal end to hostilities was on the agenda for the summit between Kim and South Korean President Moon Jae-in next week in the demilitarized zone between the countries.

“They do have my blessing to discuss the end of the war,” Trump said.

Yet such a deal would be complicated and would require direct U.S. participation and agreement. The United States signed the armistice agreement on South Korea’s behalf, and any peace treaty would have to be between the United States and North Korea.

A big part of the reason a peace treaty has never been signed is because Pyongyang has long insisted that if a peace treaty was agreed, U.S. troops would no longer be required in South Korea, a demand the United States has rejected.

Trump’s planned session with Kim, the dynastic leader Trump has mocked as “Little Rocket Man,” comes after the two traded insults and threats last year. Trump vowed to “totally destroy” North Korea if it menaced the United States or its allies, and Kim called Trump senile.

On Tuesday, Trump said the summit with Kim was likely to happen by early June if all goes well. He added a caveat: “It’s possible things won’t go well and we won’t have the meetings and we’ll just continue to go on this very strong path we have taken.”

Trump later said that five locations are under consideration to host the summit and that a decision would come soon. None of the locations was in the United States, Trump said later, in response to a question from a reporter. Administration officials are said to be looking at potential sites in Asia outside the Korean Peninsula, including Southeast Asia.