National In Florida, Trump Reaches Out to Hispanic Voters Receptive to His Message
National 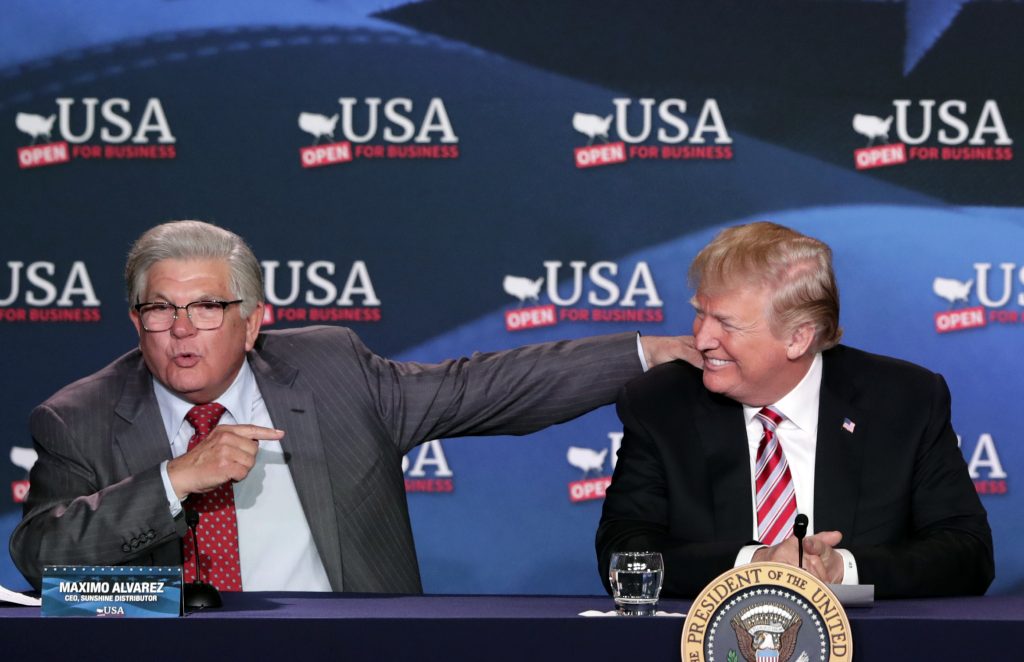 “Are there any Hispanics in the room?”

President Donald Trump grinned. “No, I doubt it,” he said with a chuckle, but he knew there were. His was a rhetorical question. On stage with him here at Bucky Dent Park were Sen. Marco Rubio, R-Fla.; Rep. Mario Diaz-Balart, R-Fla.; Labor Secretary Alexander Acosta, the only Latino cabinet member; and several local Hispanic business leaders.

The crowd, filled with dozens of the Cuban- and Venezuelan-Americans who populate South Florida, cheered.

For Trump, the latest in a series of roundtable events to sell his tax-cut measure to the public a day before Tax Filing Day served an ulterior purpose: to appeal to the sliver of crucial Hispanic voters in this important swing state who are most receptive to the policies of a president who has alienated large swaths with his anti-immigration message.

“For Hispanics, we have the lowest level ever recorded,” Trump said of unemployment rates, reading from a notecard. “I’m really proud of it.”

Trump’s visit to this district about 13 miles northwest of Miami came ahead of his two-day summit with Japanese Prime Minister Shinzo Abe that begins at Mar-a-Lago on Tuesday. It served as a way for the president to tout his biggest legislative achievement, the Republican tax-cut bill passed in December that the GOP hopes will give it a political boost as many Americans see a dip in their tax bills.

Polls show that a majority of the public remains skeptical of the tax bill, but Trump’s events have featured local business leaders extolling the virtues, saying they’ve granted bonuses to employees and invested in their businesses.

The event here Monday was no different, but the wrinkle came because the people on stage with Trump told of their personal journeys as immigrants who arrived in the United States seeking opportunity.

Maximo Alvarez, the president of Sunshine Gasoline Distributors, came from Havana in 1961 as one of 14,000 children fleeing the Castro regime. Sitting next to Trump, he called the United States the “most generous country in the world” and thanked Trump for “restoring the capacity for people like me to start a business in the trunk of our car to become a very prominent country.”

Alvarez teared up as he added, “If I gave everything I had today, it would only be 10 percent of what I was given when I came to this country of ours.” As Alvarez dried his eyes from behind his glasses, Trump stood and applauded and reached out to grab his hand.

The scene might have come as a surprise given Trump’s strong anti-immigration rhetoric: In addition to his pledges to build a border wall and his administration’s tougher enforcement posture against undocumented immigrants, Trump has sought to press Congress to support lowering legal immigration levels.

Yet in this part of South Florida, many voters are supportive of Trump because of his tough rhetoric on Cuba and the regime of Nicolás Maduro in Venezuela. The president has denounced human-rights violations in both countries, as have Rubio and Diaz-Balart, and the administration has levied economic sanctions on Caracas. Attending the Summit of the Americas in Trump’s absence last week, Vice President Mike Pence met in Lima, Peru, with four Venezuelan opposition leaders.

“Here there’s gratitude toward the president,” Diaz-Balart said in an interview, “gratitude that the policy of appeasing of the Castro dictatorship, and to some degree the Chavez-Maduro dictatorship – those days are over. Why? Because here there’s no misunderstanding that you don’t hurt anti-American dictatorships by helping to fund them more. You don’t hurt them by legitimizing them. You hurt them by diplomatically and economically pressuring them and by helping the opposition, and that’s what this administration’s been doing.”

John Bolton, Trump’s hawkish new national security adviser who was among the president’s aides in the crowd, drew a standing ovation when the president introduced him. Some in the audience pumped their fists.

“Thank you for John Bolton,” Rubio told Trump. “It’s a bad day for Maduro and Castro, and a great day for the cause of freedom.”

The Hispanic unemployment rate fell to 4.7 percent last year, a historic low that it had not been at in more than a decade, according to Pew Research Center. Trump, who had attempted to roll back regulatory provisions from the Obama administration, has taken credit for the economy, though it had been improving in the final years of President Barack Obama’s tenure.

But by and large, Hispanic voters have largely disapproved of Trump. A new Washington Post/ABC News poll showed that 81 percent disapprove of his job performance, with just 16 percent approving. In another sign that Trump was eager to improve his standing among Hispanics, the president was scheduled to do an interview with Univision, a major Spanish-language network.

Elena Dolinski, 51, a native Venezuelan who has lived in the United States for 15 years, became a citizen last year and said she remained open to Trump’s message after listening to him at the tax event.

But she added: “I think that the beauty of this country is the diversity that we have. We have an example today on this panel. Most of those people are immigrants.”