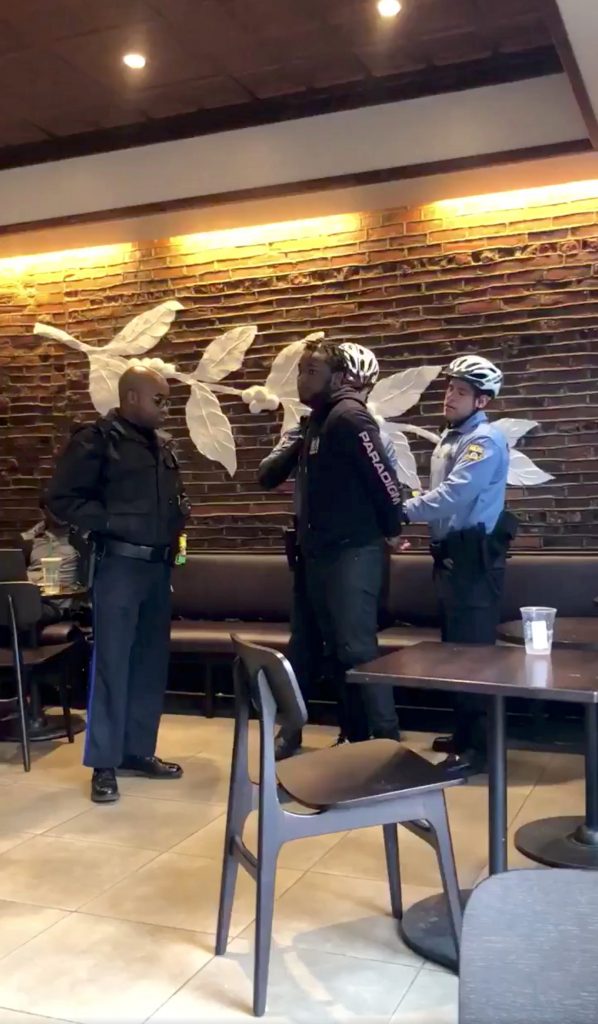 Starbucks sells itself as a community gathering spot as much as a coffeehouse, a welcoming place with comfortable chairs for lingering, and wi-fi. That’s one reason the arrest of two black men who were sitting in a Starbucks struck a nerve for so many: They were doing exactly what people do at most any of the chain’s 28,000 stores worldwide.

The CEO of Starbucks Co., Kevin Johnson, called the arrests a “reprehensible outcome” and said he wants to personally apologize to the men, saying the company “stands firmly against discrimination or racial profiling.” But that didn’t stop protesters from gathering Sunday outside the store in downtown Philadelphia where the arrests occurred.

As people ordered coffee inside, the Rev. Jeffrey Jordan led a crowd of a couple dozen in chants of “I am somebody, and I demand equality now.”

“It is a shame that (in) the year 2018 we’re still putting up with this mess,” said Jordan. “This country was built on the backs of black and brown people and now Starbucks is going to treat us like we’re second-class.”

In Washington, D.C., Gregory Wilkins usually visits one of three neighborhood Starbucks for about 45 minutes before work to read the paper with his coffee or smoke a cigarette at the outside tables. Wilkins, who is black, said he’d consider going elsewhere if something like the incident in Philadelphia occurred again.

“If nothing is done about what happened, then yeah,” Wilkins, 56, said as he went into a Starbucks.

The arrests, which occurred Thursday, were captured on video that quickly gained traction on social media.

Video shows several police talking quietly with two black men seated at a table. After a few minutes, officers handcuff the men and lead them outside as other customers say they weren’t doing anything wrong; Philadelphia-area media reported the two had been waiting for a friend.

Officers went to the store after Starbucks employees called 911 to report the men were trespassing, said Police Commissioner Richard Ross. He said officers were told the men had come in and asked to use the restroom but were denied because they hadn’t bought anything. He said they then refused to leave.

Johnson’s statement didn’t address exactly what led to the police call, but a Starbucks spokeswoman said the store where the arrests occurred has a policy that restrooms are for paying customers only. In the video, no Starbucks items are visible in front of either of the men.

Robert Passikoff, the president of a New York-based consulting firm that researches brand loyalty, said companies like Starbucks are in a tough spot as they attempt to operate both as both community centers and places where people are expected to make a purchase.

“Companies have gone out of their way to establish the kind of emotional bonds and product delivery that they think is going to build engagement and loyalty and, ultimately, profits,” said Passikoff, of Brand Keys Inc. “But today the consumer decides what is right. They have become magnets for social experiences, in the broad sense of ‘social,’ but not in the sense that ‘Oh, I need to buy something.'”

Johnson said the company’s practices and training led to a “bad outcome,” and the reason for the call that brought police into the shop was incorrect.

“Our store manager never intended for these men to be arrested and this should never have escalated as it did,” said his statement. Johnson said videos of the arrest were “very hard to watch,” and the company was investigating.

Johnson said the company would further train workers on when to call police and host a company-wide meeting to “underscore our long-standing commitment to treating one another with respect and dignity.”

Police haven’t released the names of the men who were arrested. A spokesman for the district attorney’s office said the two were released “because of lack of evidence” that a crime had been committed, but declined further comment, citing a police investigation.

At the protest, Wendy Mial vowed to never enter another Starbucks. Mial, 53, said she was “devastated” by the arrests and urged the small crowd not to the “choose the wrong enemy.”

“The enemy, in some ways, is ourselves,” she said. “Look how few people are here today. Who’s not outraged about this?”