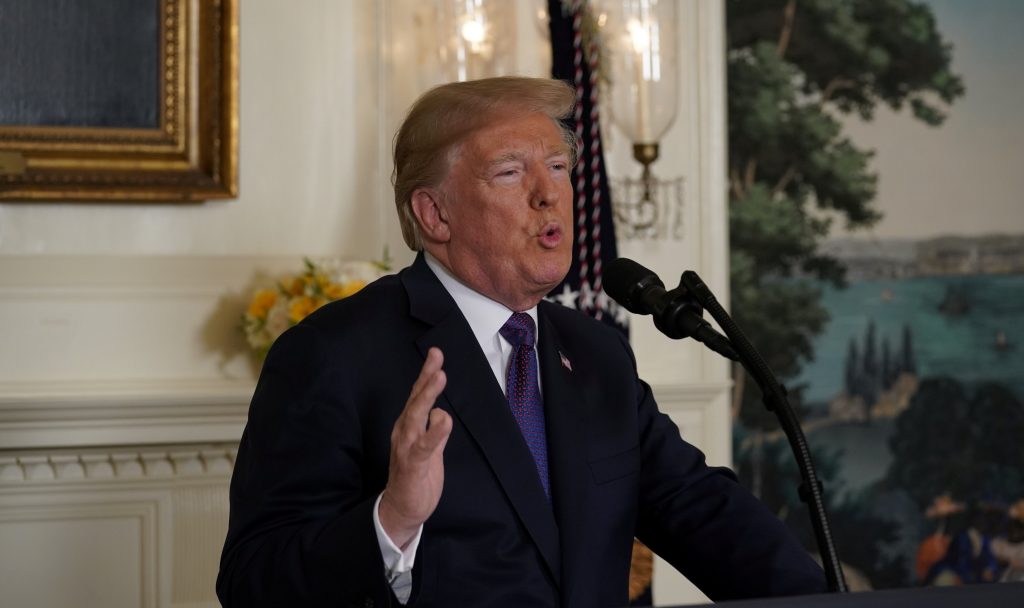 Over half, 56 percent, disapprove of Pres. Trump.

By contrast, 61 percent say they have an unfavorable view of Pres. Trump “as a person,” with almost half saying they are “strongly unfavorable.” Just under a third, 32 percent, view Pres. Trump favorably on a personal level.

Eleven percent of adults say they approve of Pres. Trump’s presidency but do not have a favorable view of him personally, either by saying they are unfavorable or offering no opinion.

For this group, both partisanship and views of Pres. Trump’s economic plan factor into their approval of his overall job performance. Six in 10 are either Republicans or Republican-leaning independents, and 9 in 10 approve of how he has handled the economy.

The public is skeptical that American workers would benefit from a burgeoning trade skirmish with China. Asked if Pres. Trump’s announcement of planned tariffs on some imported goods, followed by China’s threat of tariffs on U.S. products, would be good or bad for U.S. jobs, 49 percent predict it would be bad while 36 percent think it would be good. A sizable 15 percent are unsure.

Overall, Pres. Trump has gained ground in approval among several demographic groups that were important in his 2016 campaign. For one, 59 percent of Americans living in rural areas now approve of his job performance, up 17 points from January and a smaller seven points from last November. Among white rural Americans specifically, his approval is even higher: 65 percent approve, up from 50 percent in January.

Pres. Trump continues to face overwhelming disapproval from an array of other groups, including 79 percent of racial and ethnic minorities, 67 percent of adults under age 30, and 64 percent of women. Nearly 9 in 10 Democrats and more than 8 in 10 liberals also disapprove of Pres. Trump.

The question of favorability as a person was also asked of presidents George W. Bush and Bill Clinton during their presidencies. Bush fared best, with more than 6 in 10 reporting favorable personal impressions of him during his first year in office. Pres. Clinton’s personal image was far worse when first tested in a 1998 Post-ABC poll; 54 percent said they had an unfavorable view of the president. Negative personal ratings for Clinton peaked at 67 percent in 1999, higher than Pres. Trump’s current 61-percent mark, though his image recovered somewhat after leaving office.

While negative personal ratings appear to be a drag for Pres. Trump, Clinton’s experiences show that Americans are willing to look past certain concerns in rating a president’s job performance. At that lowest point for Clinton’s personal ratings in March 1999 – a month after Clinton was acquitted of impeachment charges – 30 percent reported a favorable view of him personally but 64 percent approved of his job performance.

The economy was a major reason for the disconnect, with three-quarters of adults approving of Clinton’s handling of the economy in early 1999.

Pres. Trump’s current low personal favorability is met by only slightly higher job approval. One reason is that while 46 percent of Americans approve of Pres. Trump’s handling of the economy, 75 percent approved of Clinton’s economic stewardship in early 1999.

The Post-ABC poll was conducted April 8-11 among a random national sample of 1,002 adults reached on cell and landline telephones. Overall results have a margin of sampling error of plus or minus 3.5 percentage points.