Business AUTO REVIEW: 2018 Nissan Armada: The Beauty of This Beast Is Value
Business 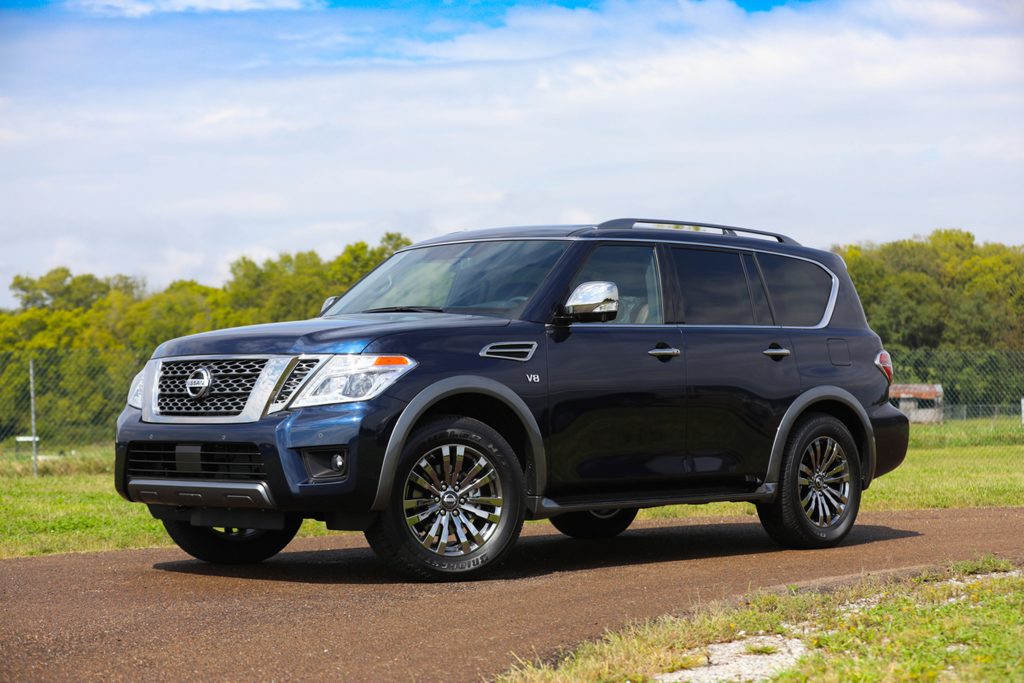 Big has never been so bountiful. That’s a challenge for the 2018 Nissan Armada full-size SUV.

The flagship of Nissan’s flotilla of crossovers contends in a crowded class of redesigned family leviathans spanning from GM’s 2015 family of full-sizers to the upstream 2018 Lincoln Navigator to the forthcoming Mercedes GLS. The only stale one on the market is the Toyota Sequoia, which is appreciated for its rugged old-school truckness.

The redesigned Armada offers value with refinement and capability. It’s not as flashy or expensive as the competition, and the in-car technology carries far too many buttons to be intuitive, but it checks all the important boxes for an eight-seat truck-based family hauler.

Moving away from the Titan pickup truck platform it shared since its inception in 2004, Armada now uses a more refined platform shared with the Patrol SUV sold elsewhere in the world and the upmarket Infiniti QX80.

Visually it looks similar to the QX80 but starts at $20,000 less. It’s over an inch longer, presumably due to the rear bumper, though the wheelbase and height have shrunk by more than two inches, making it look more proportionate than the bulky outgoing model. Add the dark chrome accents of the tester for $3,000, including 20-inch dark chrome wheels, and the similarities to its platform-mate are even more striking.

The similarities end on the inside, though the Armada is still very nicely equipped in the top-of-the-line Platinum Reserve trim level. Because it rides high even in the lowest seating position, and because the rear headrests can limit rear visibility, Nissan uses an “intelligent rearview mirror” which has a camera view from the top of the rear liftgate projected onto the actual mirror, in addition to the standard backup camera in the 8-inch touch screen. Instead of glancing in the mirror and seeing a gaggle of cackling tweens, for instance, you’ll see what traffic is behind you and in the blind spot before changing lanes.

Power liftgate comes with the Platinum, so closing it from the driver’s seat when the kids forget is simple. Third-row 60/40 split seats also get the power treatment for easy flat-floor storage, and the handle on the side of the second row 60/40 split seats is durable yet easy enough to be operated by grade-schoolers getting in the third row.

Those same grade-schoolers might have too much fun playing with the reclining third-row seats, until they are lulled to sleep on the holiday road. Headroom and legroom is ample back there for under 6-footers, while the second row is one of the most spacious in the full-size class. It is a split bench seat that doesn’t slide up or back, however, and getting out from the third row with the seat-top latch requires a bit more muscular hand dexterity. Second row slides forward for easy third-row ingress, and lays flat for a full flat floor for transporting folding tables and chairs, and a pinata or two.

Despite being powered by a Titanesque 390-horsepower 5.6-liter V-8 engine that Nissan calls best in class, the ride is surprisingly refined and quiet. Acceleration is lovely for such a behemoth, but it steers and handles exactly like what it is. The seven-speed transmission replacing the outgoing five-speed is smooth and predictable, and the four-wheel-drive power train as a whole churns out 394 pound-feet of torque, good enough to tow 8,500 pounds. Direct injection and variable valve timing combine with the additional gears to improve fuel economy by 1 mpg to 15 mpg combined, though we averaged 17 mpg at 34 mph. GM and Ford’s full-size products do it better at 18 mpg combined, which makes fuel economy the biggest deficit of the Armada.

The center stack controls aren’t far behind. After a week with the Armada, there was no greater understanding of the layout logic, which includes trip odometer and vehicle info display buttons mounted high up on either side of the gauge cluster. The narrow touch screen is too far removed for desirable touching, and a button for every function leads to a lot of unsafe time looking down to figure out which does what.

That’s too bad, because the overall feel of the Armada is refined value, even if it doesn’t feel as fresh as the competition.

2018 Nissan Armada at a glance