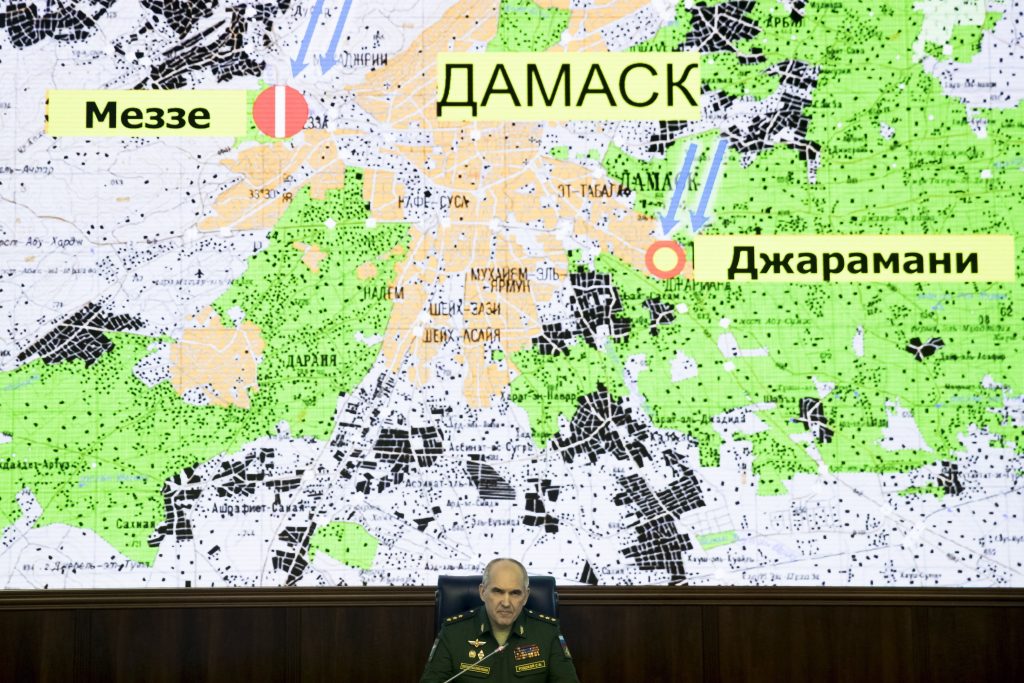 Facing a stark choice between engaging the United States, Britain and France in combat or passively watching them strike his ally, Russian President Vladimir Putin has opted for the peaceful route.

That cautious response may dent the Russian leader’s tough-man image but it won’t undermine his gains in Syria or erode his authority at home.

The Kremlin had warned Washington that Russia would fend off any strike that jeopardized its servicemen in Syria. The West respected that red line by giving advance notice of Saturday’s attack, just as it did a year ago when it struck a Syrian air base. Russia had sat idle back then, but this time, it had threatened to retaliate.

Such a clash could have quickly spun out of control — an extremely dangerous scenario that was widely compared to the 1962 Cuban missile crisis, when the world narrowly escaped a nuclear conflict.

“With our allies, we ensured that the Russians were warned ahead of time,” said French Defense Minister Florence Parly. The U.S.-led airstrikes were a response to a purported chemical attack on civilians in the Syrian town of Douma on April 7. Russia said its experts found no trace of chemical agents.

A senior French official noted that President Emmanuel Macron did not tell Putin about the strikes when they spoke on the phone Friday, but “certain de-confliction mechanisms” had already been triggered by that point and “both knew that a new phase was going to begin quickly.”

Putin condemned Saturday’s strikes as an “act of aggression” that will worsen the humanitarian catastrophe in Syria and have a “destructive influence on the entire system of international relations.” He criticized Washington and its allies for attacking without waiting for inspectors from the international chemical weapons watchdog group to visit Douma, just outside Damascus.

The Russian military said its air defenses at two bases in Syria tracked the incoming missiles but didn’t engage them.

Russian social media buzzed Saturday with angry nationalist comments blasting Putin for failing to protect his ally. But state media focused on criticizing the West for acting on the basis of what Moscow called a faked chemical attack.

The Kremlin’s tight control over the media will help Putin avoid any significant damage to his carefully nurtured image of a strong leader.

In fact, his cautious stance could boost his popularity further amid fears of war that swept Russia. In recent days, state media have been offering tips on how to behave in a nuclear conflict and what supplies to take to bomb shelters.

Most Russians will now heave a sigh of relief and feel grateful to Putin for pulling back from the brink. State media channels compared what they described as U.S. President Donald Trump’s reckless action with the responsible, statesmanlike stance taken by Putin.

Fyodor Lukyanov, head of the Council for Foreign and Defense Policies, an association of top Russian foreign policy and security experts, said on state media that Moscow’s warning to strike back “clearly hasn’t come unnoticed by the Pentagon, and the strike was quite careful.”

The Kremlin will also use the crisis to advance its narrative of an aggressive West that plunges the world into chaos and disregards international law. Russian officials and lawmakers compared it to the 2003 U.S.-led invasion of Iraq that was launched on claims that Baghdad was developing suspected nuclear weapons — allegations that proved to be false.

Commentators on state media argued that Trump and British Prime Minister Theresa May launched the attack to distract attention from their political problems at home.

For now, Putin has limited his response to calling an urgent meeting of the U.N. Security Council.

No military measures were immediately announced, but in a clear warning to the U.S. and its allies, Col. Gen. Sergei Rudskoi of the Russian military’s General Staff said Moscow could boost Syria’s Soviet-era air defense assets with batteries of state-of-the-art S-300 missiles. He noted that Moscow so far has heeded Western requests not to provide the missiles to Damascus, but said it may now reconsider.

Rudskoi added that Moscow could also supply long-range missiles to unidentified other countries, a possible reference to Iran, which has taken deliveries of S-300s in the past.

The statement clearly was aimed at discouraging the West from more attacks on Syria that could endanger President Bashar Assad’s gains on the battlefield, where Russian support has helped him secure control of most strategic areas.