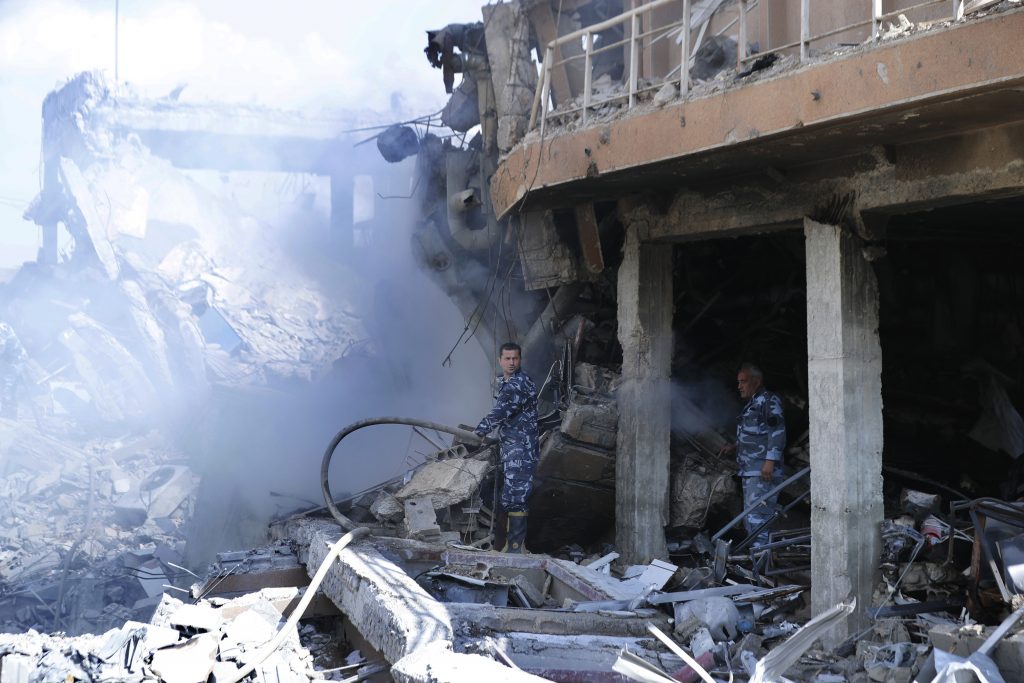 The Syrian opposition said Western strikes on Saturday would not change the course of the seven-year-old war as the army said it would crush remaining rebel parts of the country.

The missiles by the United States, Britain, and France targeted President Bashar al-Assad’s chemical weapons capabilities in response to a deadly poison gas attack near Damascus a week ago, Washington said.

But rebels and opposition politicians said the Western powers should also hit Assad’s conventional weapons which have killed many more people during the war.

Some insurgent officials said they feared an onslaught against the rebel bastion of Idlib, which a senior Iranian official has indicated could be the next target.

“Maybe the regime will not use chemical weapons again, but it will not hesitate to use weapons,” opposition leader Nasr al-Hariri said.

A rebel fighter said he was bracing for further attacks as “revenge” by the government with its allies on rebel territory in the northwest, including the Idlib region.

“More was expected from the American strike to affect the path of the war and to curb Assad’s crimes,” he told Reuters from Hama province.

Damascus and its allies have said reports about poison gas in Douma were fabricated as a pretext for Western strikes.

After the suspected gas attack, which medical relief groups said killed dozens, rebels holed up in Douma finally surrendered the town. That clinched a big victory for Assad, wiping out the last insurgent pocket in the eastern Ghouta region near the capital.

The war has been going Assad’s way since Russia intervened on his side in 2015. From holding less than a fifth of Syria in 2015, Assad has recovered to control the largest chunk of the country with Russian and Iranian help.

Mohamad Alloush, political chief of the Jaish al-Islam faction that had controlled Douma, said the Western strikes on Saturday would not be enough.

“As long as this regime and its security agencies exist, the chemical (attacks) will continue because there is safety from the consequences that would end it,” he said. “And (Assad) is portraying what happened as a victory.”

The Syrian presidency posted a video appearing to show Assad arriving for work on Saturday morning a few hours after the U.S.-led attack, dressed in a suit and tie and carrying a briefcase.

Though swathes of Syria remain beyond his grasp, the insurgency currently poses no military threat to his rule.

The opposition has praised President Donald Trump for taking action against Assad after criticizing former U.S. President Barack Obama for failing to enforce his own red line when Assad was accused of using gas in 2013. But they want more.

“The strike has weakened the regime, but has not strengthened the opposition,” said another rebel commander.

Trump last year decided to halt a CIA programme that had funnelled weapons and cash to some Free Syrian Army rebels.

Having driven rebels from eastern Ghouta, Assad and his allies are expected to soon retake the last few insurgent pockets around Damascus and nearby.

The bigger challenge will be rebel territory at the frontiers with Turkey, Jordan and Israel, and the swathe of eastern and northern Syria which Kurdish-led militias control with support from the United States.

Ali Akbar Velayati, top adviser to Iran’s Supreme Leader, on a visit to Damascus this week, said he hoped Syria and its allies would soon drive U.S. troops from the country. He also said he hoped the city of Idlib in northwestern Syria would be captured from rebels very soon.

The Syrian army said air defense systems brought down most of the U.S., British and French missiles.

“Such attacks will not deter our armed forces and allied forces from persisting to crush what is left of the armed terrorist groups,” the military said.

The foreign ministry said the Western strikes would only “lead to inflaming tensions in the world” and threaten international security.

“The barbaric aggression … will not affect in any way the determination and insistence of the Syrian people and their heroic armed forces,” state media said, citing a ministry source.