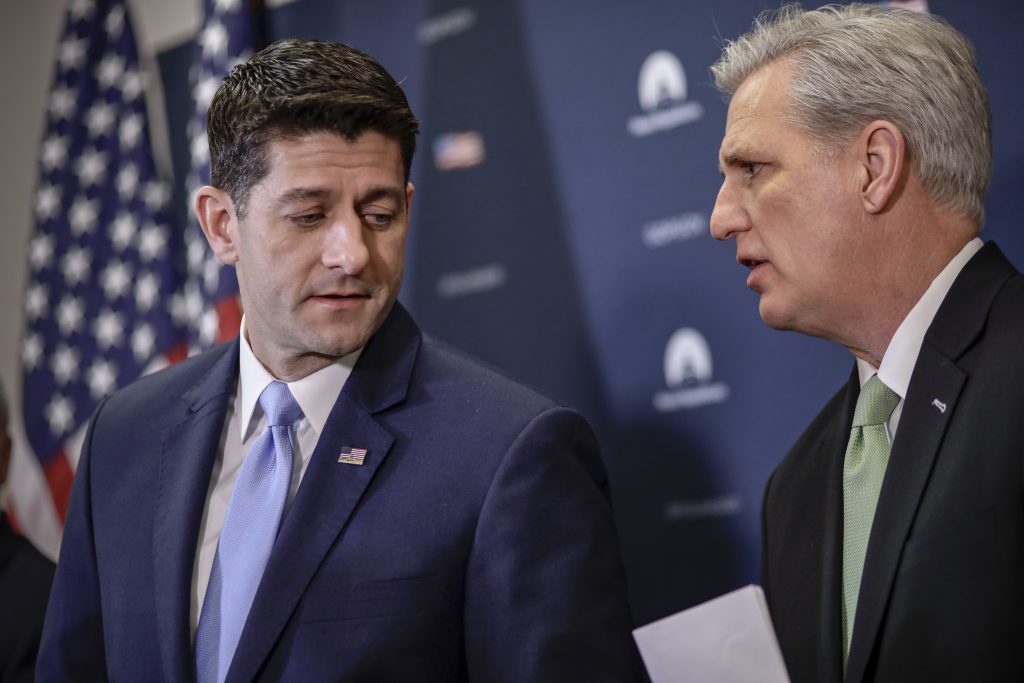 House Speaker Paul Ryan has endorsed his top lieutenant, Rep. Kevin McCarthy, to be his successor, giving a significant boost to the Californian’s candidacy in hopes of averting a divisive contest that could make an already difficult election year even tougher for divided Republicans.

“We all think that Kevin is the right person,” Ryan, R-Wis., said in an interview that will air Sunday on NBC’s “Meet the Press.”

Ryan said that while he believes McCarthy can line up enough votes now to win the job, he doesn’t want a campaign for the party’s top job to sidetrack GOP lawmakers at a crucial time. Ryan has said he will serve as speaker through the year, though some in the party want him to leave earlier.

“All these other things would be needless distractions from the task at hand” of pushing GOP legislation and “fighting for our majority,” Ryan said.

McCarthy, the House majority leader, is viewed as contending for Ryan’s job with No. 3 House GOP leader Steve Scalise of Louisiana.

Republicans are facing a difficult election season in which President Donald Trump’s unpopularity and a wave of Democratic enthusiasm are expected to cost the GOP many House seats. Should the party lose its majority, the top Republican would be minority leader, not speaker.

The White House declined to weigh in Friday on whom the president preferred for speaker.

“The president has a great relationship with Kevin McCarthy, but in terms of an announcement about who he wants to see as the next speaker, I don’t have any announcements on that front,” press secretary Sarah Huckabee Sanders said at a press briefing.

Scalise has said he wouldn’t run against McCarthy, a longtime friend.

But Scalise hasn’t ruled out seeking the job if McCarthy fails to nail down the 218 votes that will be needed to elect a speaker when the new Congress convenes in January. McCarthy failed to win enough support when he tried replacing John Boehner as House speaker in 2015, and many wonder if continued skepticism by conservatives may yet again deny him the post.

In a signal of continued conservative disgruntlement, Rep. Jim Jordan, R-Ohio, said Friday he’s “open to running” for the top job. Jordan is a leader of the hard-right House Freedom Caucus. His candidacy seems certain to fall short and is viewed as a bid to make conservatives the kingmakers in the race, perhaps in exchange for other leadership posts and committee assignments.

Ryan abruptly announced his retirement Wednesday. Republicans have been left reeling not just over who will replace him but also over whether Ryan’s lame-duck status will jeopardize the GOP’s pitch to voters and donors.

“Paul Ryan was the franchise,” Davis said. “With Paul, this was a Republican Party they could still give to. He’s a great brand for the party. He’s gone.”

On some level the impact is symbolic. Ryan was once viewed as the future of the GOP, and he is now a rudder for a party regularly tossed about by Trump’s shifting impulses. For Republicans fighting for their political survival, it’s difficult not to take Ryan’s decision as a vote of no confidence.

“It’s not confidence building,” said Ron Nehring, a former party chairman in California, who says Republicans need to boost their legislative accomplishments if they hope to get GOP voters to the polls. “Democrats are going to walk a mile on broken glass to vote against the president.”

On Thursday, Ryan dismissed suggestions from some corners that it would be best if he stepped aside now instead of in January.

“My plan is to stay here and run through the tape,” Ryan told reporters, noting he had “shattered” fundraising efforts by previous speakers, more than doubling his $20 million goal.

Money will be channeled to counter a blue wave of Democrats, who need to pick up 23 seats to flip the majority. The midterm is expected to be tougher, and costlier, than ever, especially amid the expanding battleground of open seats, which usually lack the built-in campaign apparatus of incumbency.

But a fight between two Republicans — for lawmakers’ affections and donor dollars — would certainly be a distraction.