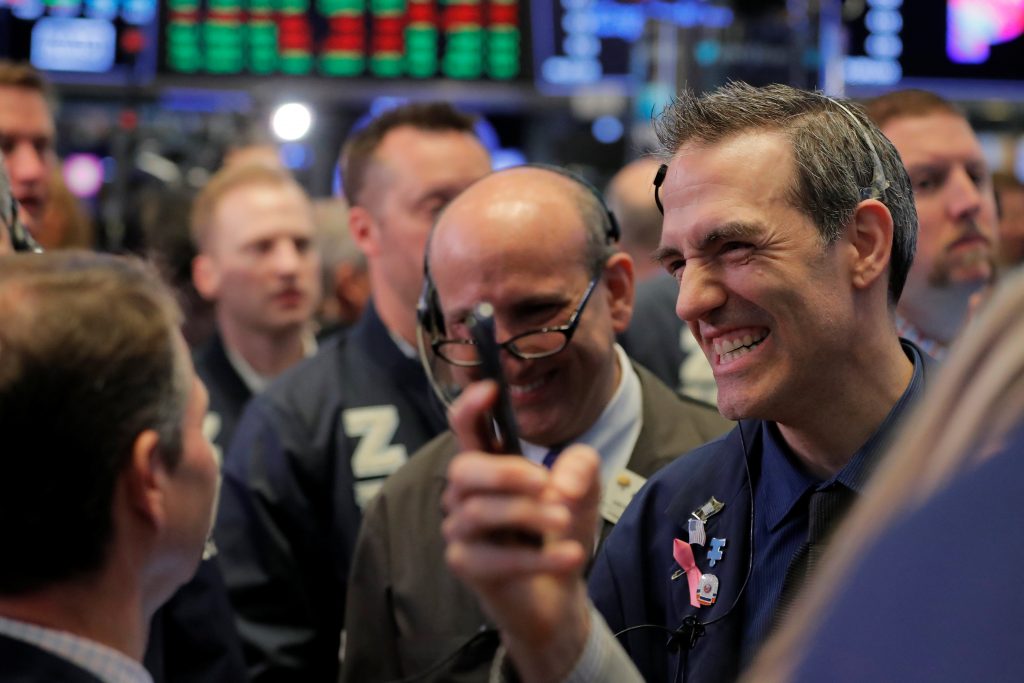 In the industrial sector, Boeing rose 2.9 percent to $336.91, and Caterpillar picked up 2.6 percent to $150.55. Airlines also rose after Delta had a solid first quarter, as both passenger and cargo revenue improved. The stock rose 2.2 percent to $52.63, and other airlines including American and United Continental also climbed.

EARNINGS: Companies are starting to report their first-quarter results. Investment firm BlackRock gained 2.8 percent to $540.04 after it surpassed Wall Street’s expectations at the start of the year.

Home goods retailer Bed, Bath & Beyond plunged after it gave a weak forecast for the fiscal year. The company also said it expects its earnings to decline next year. Its stock fell 19.3 percent to $17.36. Retailer L Brands lost 56 percent to $36.02 after it said discounts increased in March and profit margins decreased.

BONDS: Bond prices fell. The yield on the 10-year Treasury note rose to 2.84 percent from 2.79 percent. That helped banks because higher yields mean they can make more money from mortgages and other types of loans. JPMorgan Chase added 2.6 percent to $113.48, and U.S. Bancorp rose 1.7 percent to $51.42. Big dividend stocks like utilities and real estate investment trusts fell, as investors see them as an alternative to bonds and they are less interested in buying them when yields rise.

TRADE WINDS: The S&P 500, a benchmark that is used by many index funds, has fallen for three of the last four weeks as investors worried about trade tensions between the U.S. and China. It’s up 2.6 percent so far this week as investors felt new proposals by Chinese President Xi Jinping could help avert a trade war that would slow down global economic growth and corporate profits.

DEAL DOUBTS: Bristol-Myers Squibb fell and Pfizer rose after an analyst for Citi Investment Research said a deal between the two drugmakers isn’t likely to happen. Analyst Andrew Baum said he met with Pfizer’s top executives Wednesday and that they have “no interest” in Bristol-Myers or other major deals right now. Bristol-Myers lost 2 percent to $58.96, giving it a market value of almost $96 billion. Pfizer rose 1.8 percent to $36.42.

OFF RAMP: Tesla edged lower after Reuters reported that the electric car maker withdrew from an agreement to cooperate with the government agency that is investigating the fatal crash of a Tesla car operating in semi-autonomous mode. Reuters said it will continue to assist the National Transportation Safety Board. As part of the agreement, Tesla wasn’t supposed to release information about the crash to the public. The stock dipped 1.5 percent to $296.54.