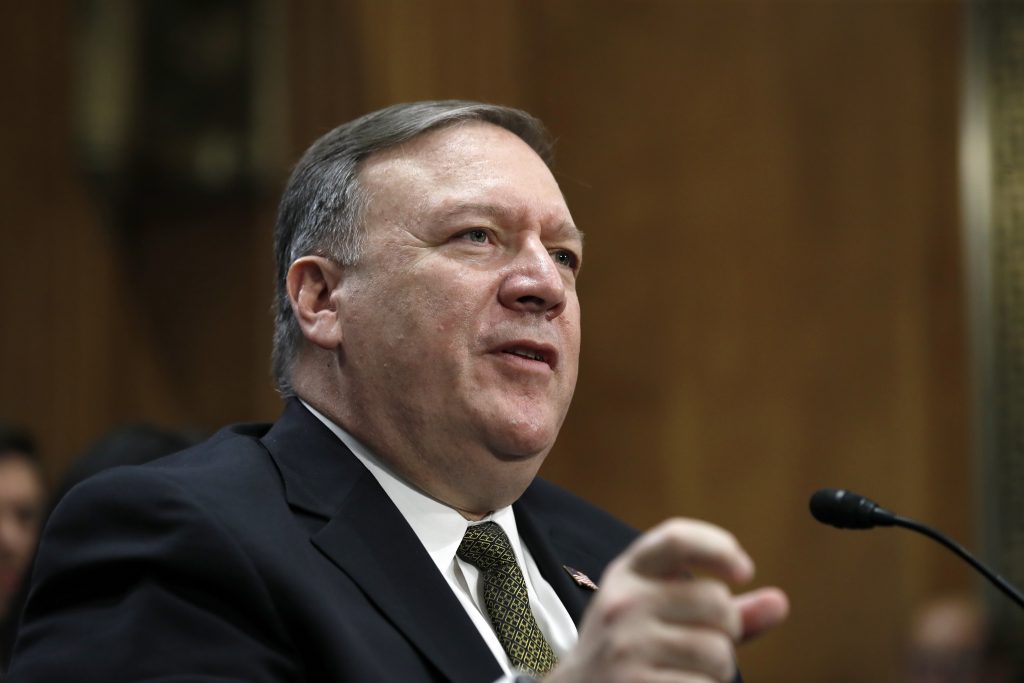 Mike Pompeo, the CIA director nominated to be secretary of state, defended the Trump administration’s efforts to push back on aggression from Russia at his confirmation hearing Thursday while suggesting that more sanctions on Moscow are still needed. Yet he dodged repeatedly when Democrats tried to pin him down on President Donald Trump’s handling of the special investigation into Russian interference in the 2016 election.

Pompeo confirmed for the first time publicly that he’s been interviewed by special counsel Robert Mueller, who is investigating potential ties between Russia and Trump’s presidential campaign and possible obstruction of justice issues. But he wouldn’t answer questions about the contents of the interview, arguing it would be improper since, as CIA director in charge of overseas intelligence gathering, he has been a “participant” in Mueller’s probe.

Under questioning, he said he would be unlikely to resign as secretary of state if Trump were to fire Mueller. Lawmakers are concerned the president may seek Mueller’s ouster to try to shut down the investigation, and the White House has said it believes Trump does have the authority to fire him if desired.

As for the prospect of leading the State Department, Pompeo pledged to make the department as central to national security decisions as the intelligence agency he now heads.

Throughout the hearing, he drew a sharp contrast with his ousted predecessor, Rex Tillerson. He lamented the “demoralizing” vacancies at the top echelons of the department during Tillerson’s tenure and said he planned to fill those vacancies, asking the Senate’s help to get nominees confirmed.

He cast his close connection to Trump as an advantage that would help him restore the significance of the department.

“My relationship with President Trump is due to one thing: We’ve demonstrated value to him at the CIA. So, in turn, he has come to rely on us,” Pompeo said. “I intend to ensure that the Department of State will be just as central to the president’s policies and the national security of the United States.”

His remarks before the Senate Foreign Relations Committee were the first chance for lawmakers and the public to hear directly from the former Kansas congressman about his approach to diplomacy and the role of the State Department, should he be confirmed. Pompeo’s views on global issues are well known — he was questioned extensively by senators for his confirmation to run the CIA — but Democratic senators have raised questions about his fitness to be top diplomat, given his hawkish views and past comments about minorities.

He sought to pre-empt concerns about Trump’s apparent unwillingness to challenge Russian President Vladimir Putin directly. He said a long list of punitive actions taken under Trump show the U.S. takes the threat from Russia seriously, adding that “we need to push back in each place we confront them,” including the economic and cyber arenas.

“Each of those tools that Vladimir Putin is using, we need to do our best to make sure he doesn’t succeed,” Pompeo said.

An avowed opponent of the Iran nuclear deal, Pompeo said he’d work immediately if confirmed to “fix” the agreement that Trump has threatened to abandon if it’s not strengthened. Pompeo wouldn’t say explicitly if he’d advocate a withdrawal if there’s no fix by Trump’s May 12 deadline, suggesting there could be an extension if significant progress was being made by then. Still, he affirmed that he won’t support staying in over the long term unless more restrictions are placed on Tehran.

Still, he acknowledged that Iran, technically speaking, is not violating the terms of the 2015 accord between the U.S., Iran and other world powers, adding: “I have seen no evidence that they are not in compliance.”

Since being nominated last month, Pompeo has spent much of his time at the State Department, immersing himself in briefing books and undergoing mock hearings and prep meetings on key issues like Iran, Syria and North Korea, as well as the inner workings of the department, a person close to Pompeo said. He’s also spoken to all eight living former secretaries — including Hillary Clinton, whom he famously criticized over the 2012 attack on U.S. facilities in Benghazi, Libya.

Pompeo, who was confirmed for the CIA job by a 66-32 vote, developed a reputation for being more outwardly political than many past directors of the traditionally apolitical agency. He developed a visibly close relationship with the president, traveling to the White House on most days to deliver the classified President’s Daily Brief in person rather than leaving the task to other intelligence officials. Often Trump would have the CIA director stay in the West Wing after the briefing to accompany him to other meetings.