Business Uber Is Not Just for Hailing Rides Anymore
Business 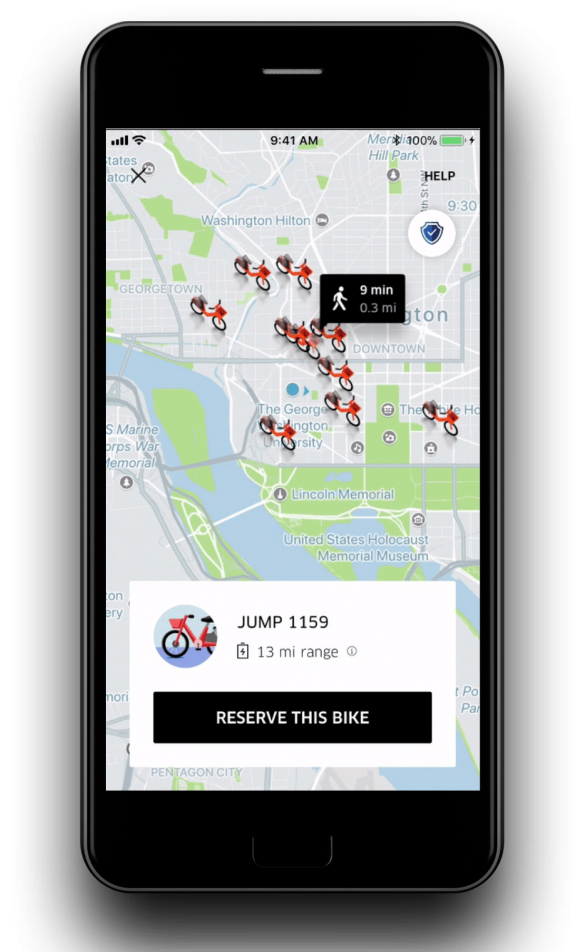 Days after acquiring e-bike start-up Jump, Uber announced Wednesday that Washington users can now rent the company’s pedal-assist bikes straight from the Uber app. You can reserve, unlock, and pay for Jump bikes the same way you hail a ride.

It’s part of an aggressive push Uber is making to position itself as a general mobility platform, rather than the simple ride-hailing app that propelled it into a $70 billion commodity. D.C. becomes the second city after San Francisco to receive Jump integration through the program known as Uber Bike. The company also says a Jump fleet expansion is in the works, allowing the e-bike start-up’s local head count to grow from 200 to 400 bikes — the maximum allowed under D.C.’s dockless bike-share pilot. An exact timeline for the fleet expansion is unknown.

Uber CEO Dara Khosrowshahi is expected to appear on a panel with D.C. Mayor Muriel E. Bowser here on Wednesday to announce the Jump integration news, along with two other new initiatives, and illustrate the company’s vision for the “Future of Mobility,” in a discussion that includes Harvard Kennedy School professor Stephen Goldsmith and moderator Robert Puentes, president of the nonprofit Eno Center for Transportation.

“Through our technology and innovation, Uber has begun to change the way cities move,” Khosrowshahi said in a post on Uber’s website Wednesday. “We share many of the same goals as the 600 cities we serve, and are committed to addressing the same challenges: Reducing individual car ownership, expanding transportation access and helping governments plan future transportation investments.”

Uber attested to Jump’s utility in its blog post Wednesday, saying the bikes offer a “convenient and environmentally friendly ride that’s often faster, especially in dense cities where space is limited and roads can be congested.”

The ride-hailing giant declined this week to specify the terms of the Jump acquisition, but in a post before the sale was completed last week, TechCrunch reported the cost could exceed $100 million.

Jump won’t appear in the traditional carousel of Uber options such as UberPOOL and UberX; Riders can access the Jump map by selecting the ‘Bike’ option in Uber’s menu. Regardless, the in-app integration likely means the e-bike service’s ridership will only continue to grow in D.C. where it is already among the most popular bike-sharing options. Jump bikes cost $2 per 30-minute ride. Unlike traditional dockless bikes that can be left on available sidewalks, Jump pedal-assist bikes must be affixed to bike racks using integrated U-locks.

Beyond the Jump integration, Uber also announced Wednesday it will partner with car-sharing Getaround to offer car rentals for riders and drivers. That service will be offered beginning later this month — but only in San Francisco for now, Uber said. Getaround lets users rent private cars from their owners — often at costs cheaper than car rental companies — and allows owners to make money on their vehicles when they aren’t using them.

“In the same way you can rent a bike through Uber, you’ll now be able to rent a car through Uber as well,” said Jahan Khanna, Uber’s head of product for mobility. “It is somewhat compelling to be able to get all your transportation through one platform. Uber is going to invest more specifically in modes that are not just ride-hailing.”

“Imagine there’s a car-sharing network that has cars every half a mile,” Khanna said. “Now you can take a bike to rent your car and go buy groceries.”

Uber is hardly the first tech behemoth to lay out its vision for the future of transportation. Lyft President John Zimmer boldly declared in September 2016 that private car ownership would be all but-phased out by 2025, with those space-hogging, oft-idle vehicles replaced with fleets of roving autonomous vehicles catering to rider needs. (Some have questioned such models, arguing that autonomous vehicles take up just as much space as private, manually operated cars — and cheap, driverless rides would only induce more congestion).

Another glimpse into how Uber sees its future role: The company also announced a partnership Wednesday with transit ticketing service Masabi. Through the deal, Uber users will be able to pay for transit rides in its app, or scan in to rail and bus services using their smartphones. The service will also include integration of transit maps and schedule information in select cities. The company did not say which cities.

“For many people, getting around their city is already a multimodal affair, and this partnership will let riders seamlessly combine public transit with other transportation options like ride sharing, no matter where they need to go,” Uber said.

For those familiar with the Transit app, which combines all of the available nearby transit into one convenient dashboard, Uber’s suite of announcements Wednesday shows how it essentially aims to become the same one-stop shop.

Except beyond just providing information on all the available mobility services, Uber wants to equip passengers to use each of them through its app.