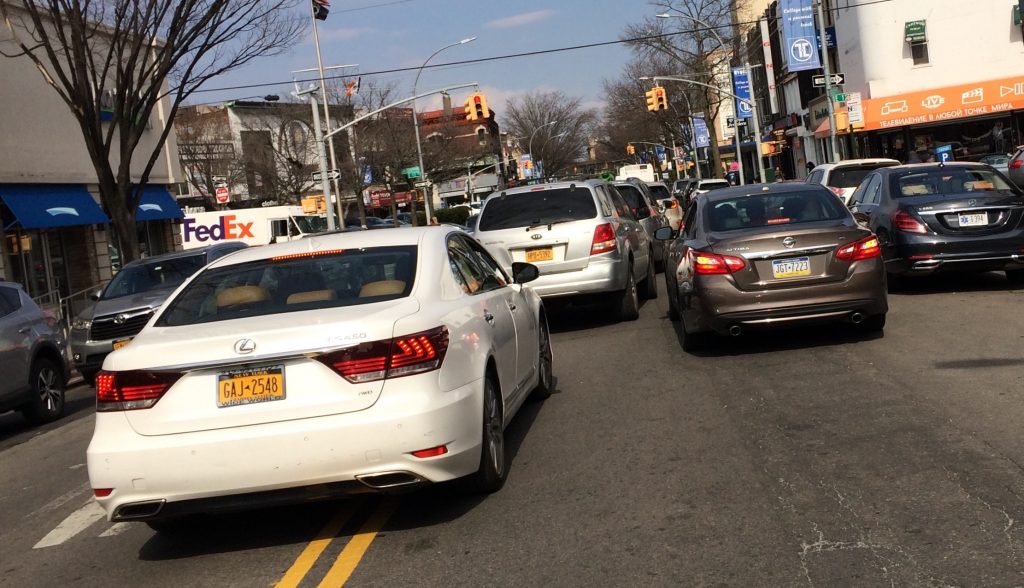 A plan to remove parking spots along heavily trafficked Kings Highway to make room for a bus lane is drawing protest from residents, business owners and elected officials.

Average speeds of B82 buses can be as low as 5 mph in some sections of Kings Highway during peak traffic hours, according to the New York City Department of Transportation. To speed up bus service on the line, which carries 28,000 riders daily, the DOT and Metropolitan Transportation Authority are planning to replace some parking lanes along Kings Highway with Select Bus Service lanes during peak hours, similar to those that already exist on 15 bus lines across the city.

SBS lanes are dedicated for buses, allowing them to travel unimpeded by the regular flow of traffic. Tickets for the buses, which will replace current B82 Limited bus service, must be purchased at ticket machines located at the bus stops before boarding, reducing the time spent swiping MetroCards on buses. These special, extra-long buses may be boarded in front or in the back, speeding up the lines of passengers.

According to DOT estimates, more than 100 parking spots would be lost along Kings Highway during these peak hours.

The DOT told Hamodia that the change in bus service was planned after “detailed consultation with the community and its leaders” by the DOT and MTA, including “outreach to 7,500 shoppers, 235 businesses, and 1,500 bus riders,” and nearly 100 project outreach meetings.

But business owners and residents interviewed by Hamodia expressed virtually unanimous opposition to the SBS proposal.

“It will be such a hardship to lose parking on Kings Highway,” said Yehuda Cohen, owner of Kosher Corner Supermarket on McDonald Ave. at Ave. S. “Our small businesses will be forced to close, and it will be disastrous for the residents that live in the area. It is already very difficult for all of us to find parking.”

Even residents who do not own cars and use the bus regularly said that they oppose the plan. Briseida Guzman, a Bensonhurst resident who uses the B82, says that the traffic problems in the area are largely caused by double-parkers.

“The same people that are double parking now will park in the new bus lanes,” said Guzman.

“Those who are not obeying the law won’t obey the new lanes either,” said Colton. “They will simply park in the new lanes.” Colton said that potential solutions to the bus problem may include adding buses and more strict enforcement of laws against double-parking.

Other officials who spoke with Hamodia were similarly united in their disapproval of the SBS lanes.

City Councilman Kalman Yeger said that the proposal “will wreak havoc on our businesses, while still providing no relief to the drivers in my community. The only guaranteed, substantial change from this proposal will be the loss of curbside parking along Kings Highway, eliminating parking for local merchants and customers.”

“The fact is, if buses ran on time — and if there were enough buses assigned to each line — there would be no need for an SBS route,” said Councilman Chaim Deutsch. “Taking away a lane for traffic … is only going to exacerbate an already existing congestion problem on Kings Highway.”

Assemblyman Steven Cymbrowitz urged the agencies to “put their plan on hold until they come up with a better option.”

“I have seen countless people triggered into anxiety, rage and even car crashes while searching for a parking spot in the proposed area of change,” said Amber Adler, a community advocate. “I urge those in power to create a solution that will accommodate our vibrant community, as opposed to jeopardizing it.”

The DOT said it will “continue to speak with elected officials in the weeks ahead to garner further feedback about the project.” The MTA said it is “mindful of local impacts when embarking upon a transit improvement project” and “committed to addressing community concerns while also serving the area’s public transit needs.”