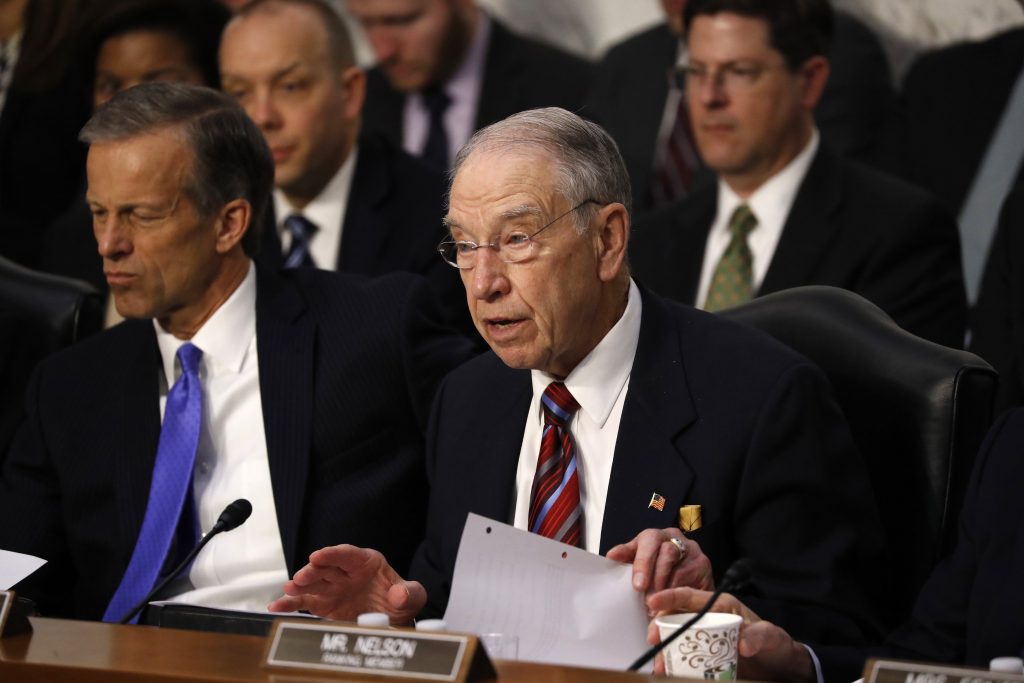 The chairman of the Senate Judiciary Committee wants his panel to vote as soon as next week on a bipartisan bill to prevent the undue firing of special counsels like Robert Mueller, according to aides familiar with his plans. Sen. Charles Grassley, R-Iowa, has asked for ranking member Dianne Feinstein’s sign-off to make a last-minute addition of the bill to the committee’s Thursday agenda, a move that would set up an April 19 vote on the legislation. A spokesman for Feinstein, D-Calif., said that the senator needs to review the bill before making a decision.

Grassley’s move comes the same morning as Sens. Thom Tillis, R-N.C., Christopher Coons, D-Del., Lindsey Graham, R-S.C., and Cory Booker, D-N.J., announced that they had completed legislation that would delay any order to fire a special counsel by 10 days, giving that counsel a window to appeal the decision to a panel of three federal judges. The bill further stipulates that during the 10-day period, no documents or materials related to the counsel’s investigation could be destroyed or staffing changes made.

The release of the bill and the fresh momentum behind it are a watershed for lawmakers who struggled to agree upon a middle ground between two separate special counsel protection bills they filed last summer in the wake of President Donald Trump hinting that he might replace Attorney General Jeff Sessions.

Trump reignited similar fears this week when he excoriated the FBI over its recent raid of the offices and home of his lawyer, Michael Cohen, noting that “many people” were advising him to fire Mueller. The comments inspired a strong backlash — including from Grassley, who said on the Fox Business Network that it would be “suicide for the president to want to talk about firing Mueller.”

But Republicans backing the special counsel protection bill insist that their efforts are not inspired by the president’s latest tirade.

“I want to separate [myself] continuing to have the dialogue and get to a bill from, like, ‘it’s got to be passed by midnight tomorrow, or all is lost.’ I don’t buy that,” Tillis said in an interview Tuesday. In a statement Wednesday, he stressed that the bill was not just about Mueller, but would help “ensure that special counsels — present or future — have the independence they need to conduct fair and impartial investigations.”

Grassley had refused to schedule a committee vote for either special counsel bill until the two measures — both filed last summer — were fused into one piece of legislation.

That happened months ago, according to a congressional aide familiar with the negotiations, but Republican senators hesitated to endorse it, stating publicly that they thought the urgency behind the effort had dissipated, and arguing that Trump was showing no signs that he planned to orchestrate Mueller’s firing.

In the past several weeks, Grassley had been urging negotiators to move faster toward striking a final agreement on compromise legislation, according to other aides. He is also planning to offer an amendment to the bill requiring the president to give Congress advance notice of his intention and report the reasons for firing a special counsel, much like the requirements for firing an inspector general.

The amendment would be in addition to the procedures outlined in the compromise bill, and are designed to give Congress a fallback political opportunity to take steps — including and up to impeachment — to protect a special counsel if the courts strike down parts of the bill, presuming it becomes law.

Grassley is one of several Republicans who raised constitutional concerns with the original special counsel bills, because they subjected the president’s authority to hire and fire an executive employee to review by a different branch of government. Authors of the proposal have pointed to case law to push back on that criticism — including a January decision from the D.C. Circuit Court of Appeals that declared that a 1988 Supreme Court ruling about the constitutionality of an independent counsel statute was still good law.

Grassley’s chances of voting for the bill are probably higher if his amendment is included in the measure. Democrats already feel confident that there are enough votes to get the special counsel bill through the Judiciary Committee, with Tillis and Graham’s sponsorship, and hope more Republicans come on board.

“It’s important to emphasize that the Department of Justice has regulations today that prevent the president” from firing a special counsel, Coons said. “This isn’t creating out of new cloth some new protections.”

Each of the two original bills the co-authors filed last year envisioned a process by which an order to fire a special counsel would have to pass muster with a panel of three federal judges to actually result in that counsel’s determination. But they differed in one key respect: Graham’s and Booker’s measure stipulated that the panel of judges would weigh in before the special counsel could be terminated, while Tillis’ and Coons’ created a 14-day window in which an ousted counsel could seek expedited judicial review of the decision.

Officially, Mueller would have to be fired by deputy attorney general Rod J. Rosenstein — whose role in overseeing the probe and various other matters has not escaped the president’s notice.

On Tuesday, Schumer also warned the president that “any attempt to remove Rod J. Rosenstein will create the exact same constitutional crisis as if you fired Special Counsel Mueller.”

“Don’t do it, do not go down this path,” Schumer added. “For the sake of our country, we plead with you. Don’t put this country through a constitutional crisis.”