Community Erev Pesach in Albany: Inside the Final 45 Hours That Secured Relief for Yeshivos
Community 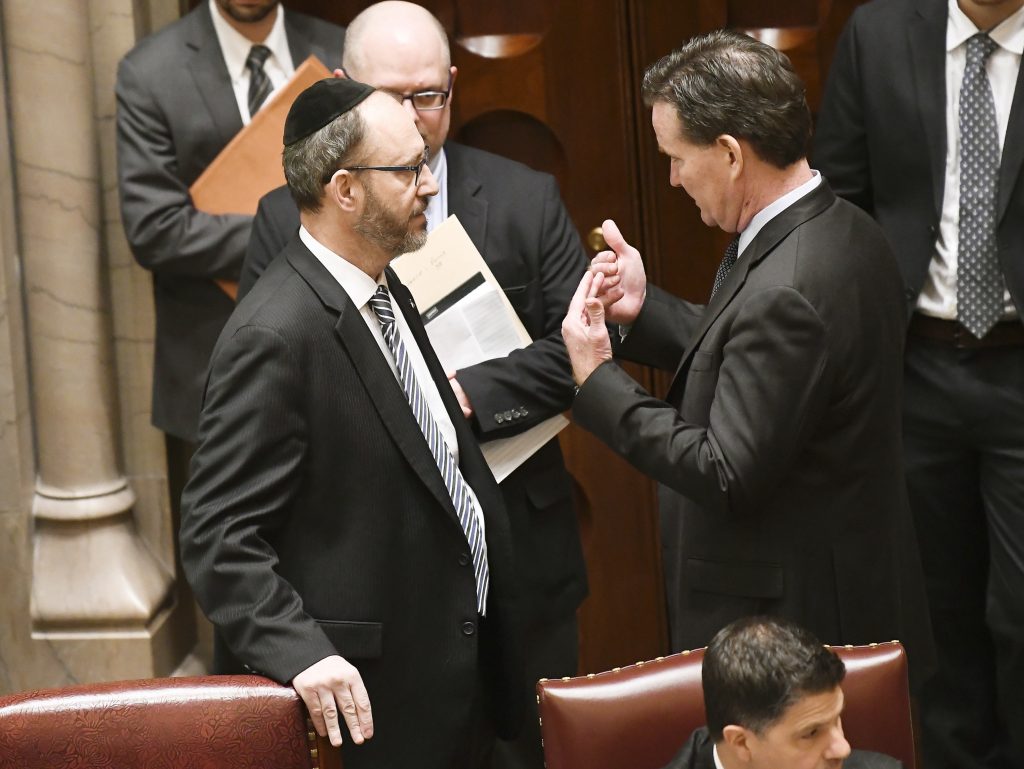 The maror may have been bitter, but this year’s Seder was especially sweet for Simcha Felder, who arrived at his Midwood home less than five minutes before Pesach arrived, having spent the week in Albany securing an achievement that some yeshivah advocates termed “historic” and the highlight of his career.

In a conversation Sunday with Hamodia, Sen. Felder agreed that it was a rare opportunity to address a situation that had been festering these past few years.

“Everyone has the opportunity to do something that’s lifechanging,” Felder said. “We have to pray to Hashem that we don’t miss it.”

Kudos for the Brooklyn Democrat poured in from many in the Orthodox community, somewhat offsetting the critical editorials and broadsides by Democratic elected officials.

“Ashrecha Reb Simcha, that you merited the salvation through your work,” declared Harav Aharon Teitelbaum, the Satmar Rebbe, speaking in his beis medrash in Kiryas Joel on Chol Hamoed. He also thanked Reb Yaakov Sofer as well as Rabbi Chaim Dovid Zwiebel, among other askanim.

“In the name of the 100,000, 200,000 children across the state of New York — the zechus harabbim hung on you,” said the Rebbe, credited by Felder and other askanim as the force behind the achievement. “On him it is said, ‘There are those who acquire their World [to Come] in a single moment.’”

The Bobover Rebbe, Harav Benzion Halberstam, was also involved and he publicly thanked Felder while speaking at the end of his second Seder.

“Just like Esther in the Megillah,” Yoel Rosenfeld of Bobov added in a conversation with Hamodia, “Hashem put Simcha in this position and he performed like a true eved Hashem. He delivered massive relief for yeshivos. We are amazed at the mesirus nefesh he and his wife had for him to be willing to stay in Albany on Erev Pesach.”

Another askan familiar with the issue said: “Simcha Felder saved the yeshivos.”

“Historic,” pronounced Agudath Israel of America in a press release issued Tuesday, adding that “New York has now for the first time recognized the unique nature of a yeshivah education.

“The old law, standing by itself without any polishing, could easily have been a disaster for our community,” Rabbi Zwiebel, who has been closely involved since the beginning, told Hamodia. “Sooner or later we would have been held up to that standard and I don’t know if we would have been able to prevail. A lawyer would have had very few tools to work with under the old law.”

“It might have been worth the extreme nature of holding up the budget because that was the only leverage we had to get something like this passed,” he said.

With the recent attention on the state of secular education in yeshivos in New York, the Brooklyn Democrat leveraged his unique status providing the Republicans with their majority in the Senate to effect changes to an education law practically unique to New York and a handful of other states.

The law, known as the “substantial equivalency” requirement, while rarely if ever enforced, could have been read as discriminating against institutions with long hours by not allowing the rigorous learning of the entire day to be considered when evaluating their proficiency.

The requirement has been on the books in New York since 1929. While its meaning has been ambiguous from the beginning, some have said that it demands that nonpublic schools instruct the same subjects as their public counterparts. For elementary grades, this usually means teaching 11 subjects for at least four hours a day, depending on the grade. For high school, the requirement is for 15 subjects for five and half hours.

This is mandatory irrespective of test marks. So a yeshivah that has, for example, three hours of secular studies education but the average test mark is above standard can still be cited for violating the substantial equivalency requirement.

However, the obligation is an anomaly unique to just New York and six other states; most states have no such requirement, and most states with an equivalency law on the books do not intrude on the nonpublic school sector to require that it be substantially the same as the government-funded institutions.

Urged on by the Satmar Rebbe, Felder began meeting with askanim several months ago to develop new language for the law. Their goal, while far-reaching, was simple: To simultaneously protect nonpublic schools from undue government interference while ensuring that the law’s intent — that private schools provide their students with a comprehensive education — not be diluted.

The new law, which passed with the rest of the $168 billion state budget and was signed into law on the first day of Pesach, remains firmly within the “sound, basic education” mandated by the state constitution and a host of court rulings, according to people involved in fashioning it.

The law now requires designated schools to teach four core subjects, and asks the state to take into account how many hours a school is in class a day, not just for secular studies. It also says that evaluators consider the critical thinking students gain by honing their brains on other subjects when assessing the school’s success.

In negotiations with the Assembly, a provision was included allowing the state education commissioner to have the option of considering other factors as well.

The criteria were narrowly tailored to schools that are nonprofits, have a bilingual program, and have an educational program that begins before 9:00 a.m. and goes until at least 4 p.m. for grades one through three, 5:30 for grades four through eight, and 6 o’clock for high school.

“The department,” the law reads, “shall consider … if the curriculum provides academically rigorous instruction that develops critical thinking skills in the school’s students, taking into account the entirety of the curriculum, over the course of elementary and middle school, including instruction in English that will prepare pupils to read fiction and nonfiction text for information and to use that information to construct written essays that state a point of view or support an argument.”

One askan close to the negotiations told Hamodia that the law would greatly reduce the pressure yeshivos were under.

“The law was against us until now,” he said. “We made the argument that if [students] are there anyhow for so many hours, why penalize them for that?”

The state education department is scheduled to discuss new guidelines for nonpublic schools at the Board of Regents’ regularly scheduled meeting next month. Spokeswoman Emily DeSantis said that the updated law should not interfere with the guidelines’ implementation, which should happen immediately afterward.

“The purpose of updating the guidance remains the same, which is to ensure that all New York state students, whether they attend a public or nonpublic school, receive a quality education that prepares them for success in life,” DeSantis said. “We are in the process of reviewing the change in law and are pleased that critical standards — such as substantial equivalence, instruction by competent teachers and English being the language of instruction — have been retained.”

The battle that culminated in a dramatic hours-before-Pesach showdown in the Capitol began Chanukah time, when askanim grew concerned about a New York City investigation into some yeshivos and a new set of state guidelines for nonpublic schools.

The Satmar Rebbe was involved in every detail, insisting on hiring a team of education attorneys to craft language to change the law in a way that would be constitutionally sound and ensure that children receive a proper secular education. The team was led by Matthew Delforte, recognized as a foremost expert in the nation on educational and constitutional law.

The team proposed four text variations, one of which was selected by askanim as the language that would best benefit yeshivah students.

Matters came to a head on the Wednesday night before Pesach, as the legislature prepared to begin voting on the annual budget ahead of the April 1 deadline on Saturday night. Bills normally must be approved three days before the governor may sign them, although Gov. Andrew Cuomo has routinely issued a “message of necessity” doing away with the “aging” period.

Felder stood up in the Republican conference room and addressed the senators he had caucused with ever since arriving in the Senate in 2013. He described the overall excellence of the yeshivah system and the unfairness of having to be evaluated based on just the few hours of secular studies.

The senators, including Senate majority leader John Flanagan, a Touro College graduate and a former chairman of the education committee, mostly agreed with Felder. Negotiations then began with the Democratic-led Assembly, continuing into Thursday night, the night of bedikas chametz.

A phone conversation then ensued between Gov. Cuomo, desperate to preserve his record of eight successive on-time budgets, and the Satmar Rebbe, at 1:00 a.m the night of bedikas chametz.

“You should know,” the Rebbe told the governor, “that all the work put in since the war to rebuild the yeshivos is at stake over here.”

Talks with the Assembly continued into Friday morning, and then Friday afternoon. Felder made clear that he was prepared to remain in Albany for Pesach if necessary to get the law change. “I can even vote,” he said.

At this time, Twitter began lighting up with the #IStandWithSimcha hashtag, with hundreds of people posting their support. The Bobover Rebbe called Felder several times to assure him of their support, as did others.

While the original bill was designed to completely solve the yeshivos’ conundrum — it was “airtight,” Felder said, negotiations between the parties resulted in a compromise agreement that was finally hammered out about 3:45 p.m. — and Felder began his race with the clock.

One unexpected development came the morning after the first days of Yom Tov, when it was discovered that at the Assembly’s insistence, a provision was included placing oversight of the yeshivos in the hands of the state education commissioner.

Felder said that it was a stretch to believe that his law’s critics were truly opposed based on education standards.

“Some of the people who claimed to be so concerned about educating children were opposed to so many of my other pieces of legislation that had nothing to do with private school education,” he said, referring to several items of legislation he has sponsored recently.

He ticked them off — a bill to help autistic children, allow practical experience picked up in vocational school to be counted toward a college diploma, ensure that public schools have enough guidance counselors, a bill to prevent New York City from instituting a bag tax, and a bill that would station armed guard in every school.

“None of the elected officials were concerned about those,” he said. “It’s the same people, who also hate charter schools, who hate private schools. Let no one be fooled into thinking that these people are concerned at all about children getting a proper education. They are just concerned about protecting their jobs and the unions whom they are enslaved and indentured to.”

Rabbi Zwiebel said that on its face the new language in the education law should satisfy critics who claim they haven’t received a basic secular education. The fact that they are still critical, he noted, means that they want to “do violence to the structure of the yeshivah curriculum.”

“Frankly, they should declare victory, this is a tremendous victory — this is a very balanced law that was passed,” he said. “You claim that people like you graduated from yeshivah without the most rudimentary knowledge of the basic subjects — right now under the law the yeshivos specifically are required and will be held accountable for these four basic areas of education.”

“Anyone who does well on these basic areas,” he said, “should be well equipped to succeed in today’s world.”