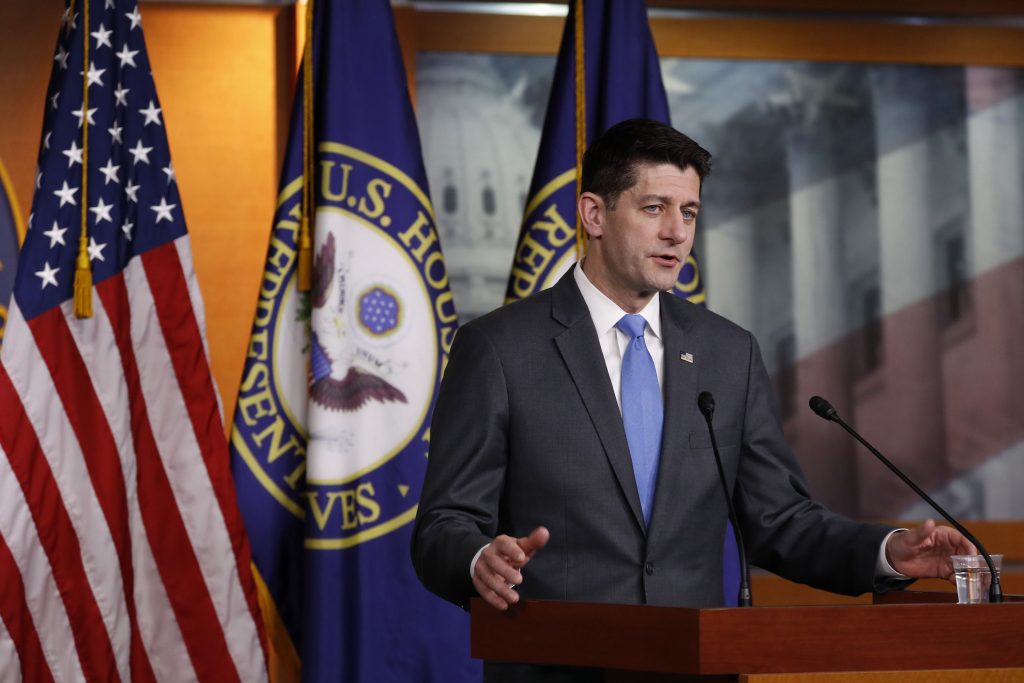 House Speaker Paul D. Ryan, R-Wis., spent two decades in Congress talking about reining in Washington’s profligate ways and overhauling the nation’s ballooning entitlement programs. He touted those views as the GOP’s vice-presidential candidate in 2012. He will depart Congress with his goals undone.

Ryan instead leaves a legacy of dramatically expanded government spending and immense deficits. The GOP is led by a president Ryan initially rebuffed, and his party has rejected his free-trade philosophy and support for reforming the nation’s immigration laws.

As he announced his plans to retire Wednesday, Ryan boasted about the passage of the GOP’s $1.4 trillion tax law, and of securing much-needed increases in defense spending in last month’s $1.3 trillion government spending bill.

“These I see as lasting victories that will make this country more prosperous and more secure for decades to come,” Ryan said.

But both measures contributed to a mushrooming deficit that the Congressional Budget Office projected this week will reach $1 trillion in 2020. Ryan has sounded the alarm about the nation’s deficit and debt for years, but leaves the situation worse than he found it despite proposing a series of budgets over the years that slashed spending and transformed Medicare into a voucher program for younger Americans.

None of those proposals became law, and President Donald Trump has taken Medicare cuts off the table.

Ryan acknowledged Wednesday that “more work needs to be done. And it really is entitlements.” But he added that he was proud that the House had passed what he described as “the biggest entitlement reform bill ever considered in the House of Representatives,” a reference to legislation repealing the Affordable Care Act and remaking the Medicaid program. That bill was rejected by the Senate.

Nonetheless, Ryan said he believed he’s had success in “normalizing entitlement reform” via a series of budgets taking the issue on.

“He’s been working on fundamental tax reform for 20 years and now he’s gotten it done. He’s been working on entitlement reform. It may not happen on his watch, but they were working on Obamacare before Obama was even born,” said House Financial Services Committee Chairman Jeb Hensarling, R-Texas. “Some of these ideas will be achieved in one Congress, some will take many congresses. But he was the one who really showed the way.”

In the short term, though, Ryan leaves behind a record of rising spending and a sharply expanded deficit.

Based on some measures, the government already has more than $20 trillion in debt, and it must make large interest payments to continue borrowing. This is expected to eventually overwhelm the federal budget, particularly if interest rates rise. But Ryan’s obsession with these issues were no longer shared by other conservative leaders, particularly after President Barack Obama was no longer in office.

Ryan has long believed that Congress should take drastic action to rework health programs such as Medicare and Medicaid, allowing more free-market competition to lower costs for the government and improve care. Some Democrats, including Sen. Ron Wyden, Ore., have at times worked with Ryan on ways to fix those programs, but those efforts have failed and liberals mostly were unified against him in recent years.

Trump, during the 2016 campaign, promised voters that he wouldn’t touch Medicare, Social Security or Medicaid if he became president, effectively emasculating Ryan’s long-held goals. Since taking office, Trump has agreed to try to cut spending on Medicaid and Social Security disability, but even those efforts have failed in a divided Congress.

“A lot of the political weight in the party has certainly moved away from that position,” said Lanhee Chen, who served as policy director to Mitt Romney during the 2012 presidential campaign. “It has made it extremely difficult for people who care about fiscal discipline, as I know he does, to operate.”

Retired senator Alan Simpson, R-Wyo., who worked closely with Ryan during a massive but ultimately failed 2010 effort to reduce the deficit, described the Wisconsin lawmaker as a “wonderful guy, and he’s a very sensitive, special man.” He said Ryan’s Republican colleagues never rallied to his side when it came time to take tough votes on addressing the government’s most costly programs, such as Medicare, Medicaid and Social Security.

“Once he mentioned those things, they were after his [posterior]. He could never get anywhere because he would mention the curse word of doing something on entitlements,” Simpson said.

Simpson added that the current White House has walled off spending cuts on Medicare and Social Security, something he thinks made Ryan throw up his hands.

But critics noted that for all Ryan’s talk over the years, his record of accomplishments on the issues he discussed most often ended up being thin.

“I think his legacy on fiscal policy, on poverty policy, on entitlements is an extremely negative one,” said Jared Bernstein, former chief economist to former vice president Joe Biden. “And the best I can say about him is up until this big tax cut, he’s been pretty feckless in terms of actually legislating.”