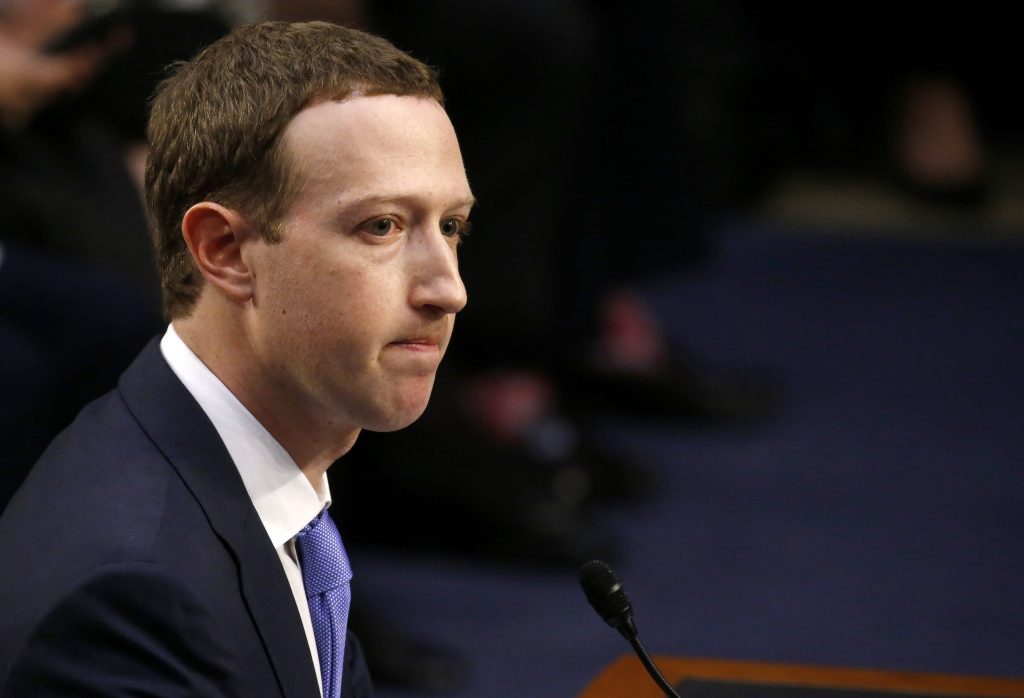 Facebook Chief Executive Mark Zuckerberg opened his comments to Tuesday’s highly anticipated congressional hearing by apologizing for a series of missteps that he acknowledged have imperiled the privacy of tens of millions of Americans and helped spread both phony news and Russian disinformation.

“It’s clear now that we didn’t do enough to prevent these tools from being used for harm as well,” Zuckerberg said at the Senate hearing. “And that goes for fake news, foreign interference in elections, and hate speech, as well as developers and data privacy.”

Zuckerberg, who has long avoided wading into Washington affairs, took responsibility for the missteps. “We didn’t take a broad enough view of our responsibility, and that was a big mistake. And it was my mistake, and I’m sorry. I started Facebook, I run it, and I’m responsible for what happens here.”

As the Senate hearing commenced, Zuckerberg appeared serious as he faced sharp criticism from lawmakers.

“Mr. Zuckerberg, in many ways you and the company that you’ve created, the story you’ve created, represent the American Dream,” said Sen. John Thune, R-S.D., chairman of the Commerce Committee, in his opening remarks. “Many are incredibly inspired by what you’ve done. At the same time, you have an obligation, and it’s up to you, to ensure that dream doesn’t become a privacy nightmare for the scores of people who use Facebook.”

Zuckerberg’s comments in Congress could reverberate throughout the technology industry. Lawmakers have concerns that may lead to greater regulation of Facebook as well as its powerful competitors, including Google and Twitter.

Zuckerberg’s testimony Tuesday afternoon came at a rare, joint hearing before two Senate panels – the Commerce and Judiciary committees – meeting in joint session, with as many as 44 senators set to question the Facebook executive. The House Energy and Commerce Committee has its own hearing scheduled for Wednesday morning.

Spectators arrived hours ahead of the hearing and lined up along the walls of the Hart Senate Office Building, snaking from the 138-seat hearing room on the second floor. Inside, Facebook aides including Elliot Schrage, the company’s vice president of communications and public policy, bided time by making the rounds with reporters, a day after the social network’s lobbyists shuttled Zuckerberg to the offices of lawmakers.

To account for the expanded roster of members attending the hearing – two committees, almost half of the entire Senate – congressional staffers added an extra table to the dais. In front, more than two dozen photographers assembled early to snap photos of Zuckerberg when he arrives at the witness table.

Facebook’s stock price, which had fallen sharply in recent weeks as the latest controversies built, grew sharply in trading Tuesday, up about 2.5 percent on a generally strong day for the market.

The most recent controversies, involving the ease with which a political consultancy and other outsiders collected data on many of Facebook’s 2.2 billion users, has generated a rare level of bipartisan consensus about the power of social media to twist public discourse and jeopardize the functioning of democracies. Many lawmakers – Republicans and Democrats – are calling for new legislation, fines or greater regulation.

Florida Sen. Bill Nelson, the highest-ranking Democrat on the Commerce Committee, said to Zuckerberg as he appeared to fidget in his chair, “if Facebook and other online companies will not or cannot fix these privacy invasions, then we will.”

Outside, on the Capitol’s grassy lawn, 100 life-size cutouts of Zuckerberg sported T-shirts saying, “fix fakebook” – the work of an advocacy group, Avaaz, trying to call attention to how fake accounts spread disinformation on the social network.

Zuckerberg, who had tried to avoid such a potentially fractious public encounter on Capitol Hill, already had made clear his desire to project contrition and a willingness to undertake reform, even endorsing legislation mandating a new level of transparency for political advertising online. But lawmakers from both parties are contemplating more aggressive legislative moves that could restrict what tech companies collect data and how they use it.

Massachusetts Democratic Sen. Edward Markey plans to introduce a new bill Tuesday called the CONSENT Act that would require social giants like Facebook and other major web platforms to obtain explicit consent before they share or sell personal data.

Lawmakers also have expressed interest in broadening their inquiry to other technology companies, including Google and Twitter. But this week’s focus will be sharpest on Facebook.

The House committee released Zuckerberg’s opening remarks on Monday, as he and top aides worked their way across Capitol Hill in a series of closed-door meetings with lawmakers. Facebook said the prepared text of the Senate testimony was identical, though Zuckerberg may vary his remarks as he delivers them.

The company has been reeling since the November 2016 election during which phony news reports spread widely on its platform and Russian operatives mounted an ambitious campaign to divide American voters, damage Democrat Hillary Clinton and bolster the chances of Republican Donald Trump.

Facebook appeared to be recovering from those controversies until last month’s revelation that Cambridge Analytica, a political consultancy hired by Pres. Trump and other Republicans, improperly gained access to data on 87 million Facebook users, including 71 million Americans. The company acknowledged last week a separate problem in which “malicious actors” were able to identify and collect data on Facebook users on such a massive scale that most of the company’s 2.2 billion users were affected.

As the company has mobilized to quell rising political opposition, Facebook also has wrestled government investigations in the United States and Europe. The Federal Trade Commission is investigating violations of a 2011 consent decree over privacy policy at Facebook that could lead to record fines against the company.