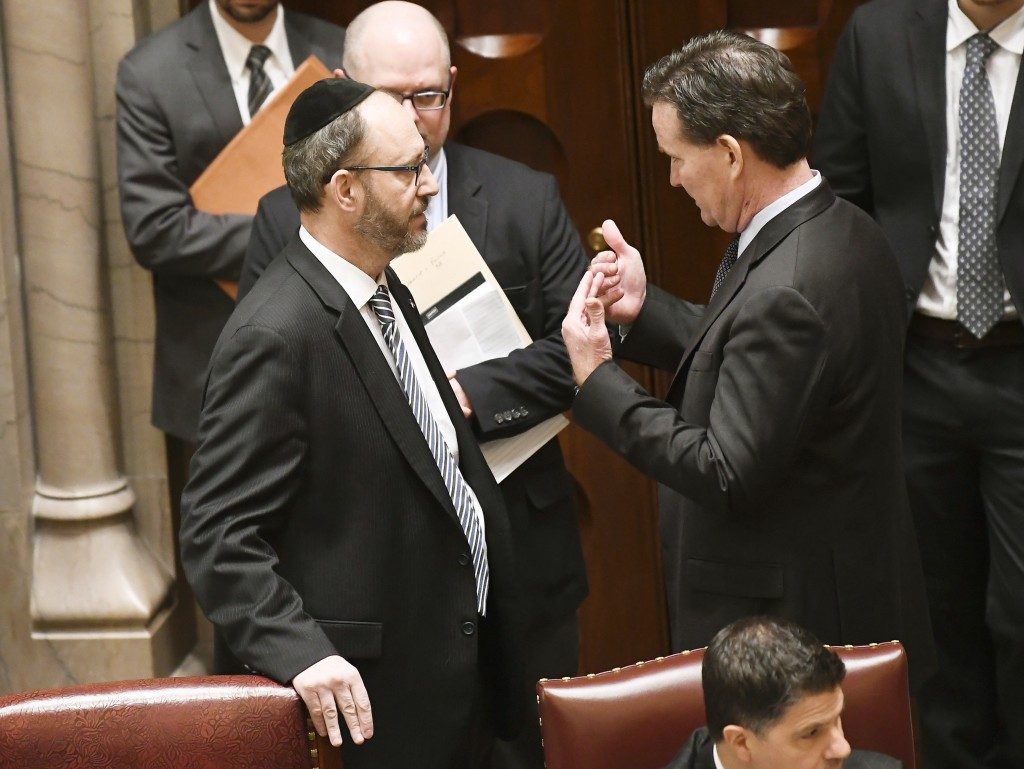 In Jewish homes across the globe, Erev Pesach is one of the most hectic times of the year. Despite the weeks of intense preparation, there always seems to be so much left to do for every adult member of the household. From setting the Seder table, to baking matzos and preparing the Maror, and just hopefully catching a short nap, every moment until the joyous Yom Tov is ushered in is a most precious one.

Yet in one Brooklyn home, a dedicated husband and father was some one hundred and fifty miles away — in the State Senate in Albany. As Klal Yisrael prepared to begin a Seder that is dedicated to the teaching of our youth about Yetzias Mitzrayim, Senator Simcha Felder was fighting for the right of Jewish children to be educated according to our mesorah.

Throughout his career as an elected official — he served as a city councilman prior to his current position — Senator Felder has been tenacious in fighting for the needs of his constituents while earning high praise for his outstanding subservience to daas Torah.

In sharp contrast to many other politicians, who put the pursuit of publicity first and foremost, Mr. Felder is well known for his unassuming approach. Following in the path of the eminent shtadlanim of yesteryear, he prefers to work quietly, focusing on achieving results instead of on claiming credit.

This Erev Pesach, though, he was unable to escape the limelight. Although his family was anxiously waiting for him at home, he refused to leave Albany until he had achieved his objective. Firmly rejecting outside pressure, and working closely with leading Rebbes, Rabbanim, and askanim, he was determined to do all he possibly could to protect yeshivos and to protect the rights of Jewish parents throughout New York State.

Mr. Felder arrived home only minutes before Pesach began, and his mesirus nefesh was rewarded with positive results. A grateful community learned on Chol Hamoed that their faithful representative had managed to secure a major accomplishment: Included in the 2018-2019 budget was a key change in the language of an obscure New York State law.

Those seeking to force changes in the ways that yeshivah students receive their education had argued that this meant that yeshivah students must spend as many hours a day in secular studies as public-school students do, and must learn each of the numerous subjects taught in public schools. Had this element been successful in their efforts to get state or city governments to enforce this reading of the law, it would have been devastating to the rights of parents whose foremost desire is that their children receive a traditional Torah chinuch.

The new, carefully crafted law now clearly defines what “substantially equivalent” really means. It lists and describes the obligatory secular studies subjects in a way that ensures a comprehensive English education, while not in any way contradicting Torah beliefs. It requires that the state must take into account the “entirety of the curriculum,” and whether “the curriculum provides academically rigorous instruction that develops critical thinking skills in the school’s students.”

This means that the profound thinking skills gained by the study of subjects like Talmud and halachah must be taken into consideration when evaluating these educational facilities.

The new law is a monumental victory for parental rights, religious liberties, basic fairness and common sense. Yet it would be a serious error to assume that the danger has passed. Those who seek to force their misguided beliefs on our community are unlikely to stop anytime soon, and the stepped-up efforts to protect the rights of parents and their children to enjoy a traditional chinuch must continue.

Senator Felder has once again underscored why he has long earned the broad respect and genuine admiration of our community. Grandparents, parents and students, as well as every Jew who cares about the continuity of Torah-true chinuch, owes Mr. Felder a deep debt of gratitude, and we respectfully urge other elected officials who represent our community to learn from his example.