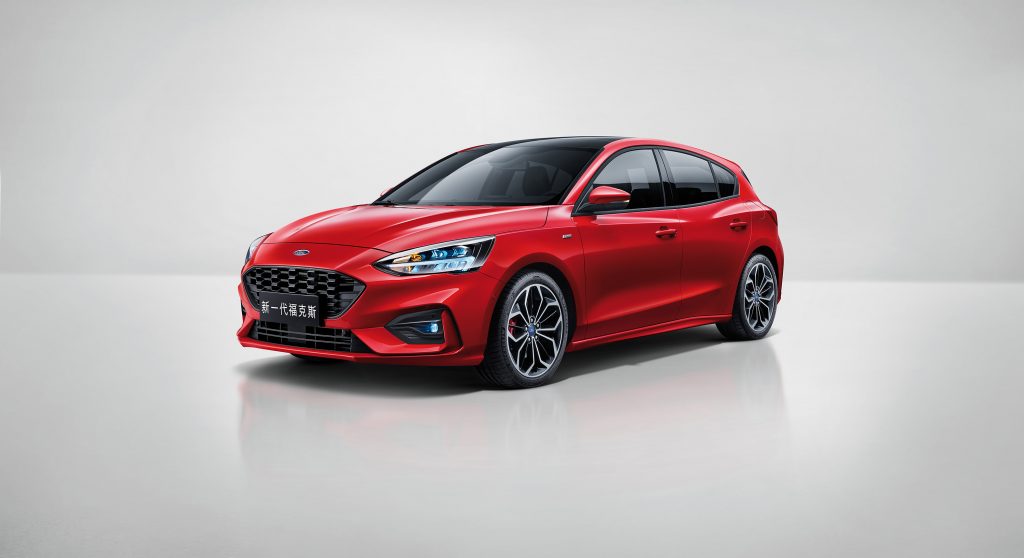 As Ford Motor Co. rolls out a redesigned version of its Focus compact car in China and Europe, it’s also debuting a strategy to be more choosy about which buyers it battles for and where.

The automaker is taking the wraps off upscale grades of the car in London including the Focus Vignale, expanding the lineup of its premium sub-brand in Europe. Ford introduced sportier ST versions of the Focus in China, which will start exporting the model to the U.S. beginning next year.

Chief Executive Officer Jim Hackett is shrinking Ford’s passenger-car lineup as consumers across the globe increasingly snub them in favor of roomier crossovers. The only sedans, hatchbacks and coupes that are sticking around will be lower-volume, higher-priced models that’ll help the company reach a long-sought profit margin goal.

“We’re more selectively competing in the car business, so this Focus reveal is a big deal for us,” Jim Farley, Ford’s president of global markets, said in an interview. “This is an opportunity to position the car more selectively in these very large markets in China, Europe and in the U.S.”

Ford also showed a revamped Escort model along with the Focus in China, betting that the sporty mid-sized vehicles will lure buyers away from Volkswagen AG’s Passat and Toyota Motor Corp.’s Corolla. The new models will be built by Ford’s local venture with Chongqing Changan Automobile Co. The second-largest U.S. automaker said it’s deepening its pact with Changan and another partner, Jiangling Motors Corp., by starting a new distribution unit.

Hackett, 62, is trying to cope with cooling sales in China by pledging 50 new models by 2025 in the country to take on local brands and western rivals. Besides stiff competition, Ford has to deal with the fallout from U.S.–China trade tensions that threaten to increase the cost of exporting vehicles between the countries.

Unveiling the vehicle in Chongqing is “strong evidence of how important the Chinese market is to Ford and how important Focus is to our success in China,” Peter Fleet, Ford’s top executive in Asia, said at a company event there Tuesday.

Seeking to defuse trade tensions, Chinese President Xi Jinping reiterated on Tuesday the nation’s commitment to reducing import tariffs on vehicles this year and loosening the foreign ownership limits for car ventures. Still, companies bringing cars from the U.S. risk being left at a disadvantage, with China threatening last week to consider levying an additional 25 percent tariff on about $50 billion of American imports, including automobiles.

Ford has said it plans to build the Focus for North America at its factory in China. On Tuesday, executives declined to say whether Ford is preparing for U.S. President Donald Trump moving forward with plans to impose a 25 percent tariff on cars imported from China.

“We don’t spend that time and resources on things that might happen or might not happen,” Fleet said. “We make our decisions based on facts and announcements.”

Any new tariffs shouldn’t impose restrictions on Ford’s venture with Changan, which manufactures cars in China for the local market, said He Chaobing, executive vice president at the unit. Such tariffs could push Ford to introduce more vehicles for local production in China, he said.

The new distribution unit in China will allow dealers to sell all its passenger-car brands including imports under one roof. Currently, different dealers have distinct product offerings in their stores.

While vehicle sales in China climbed 1.5 percent to 24.2 million units last year, Ford posted a 6 percent decline, according to the China Passenger Car Association. Ford builds several models in China and imports vehicles including Lincolns and Mustangs to the country from the U.S.

China is only increasing in importance as the U.S. auto market cools. Vehicle sales in the U.S., the second-biggest car market globally, declined last after a seven-year growth streak.

SUVs and pickups are on the ascent at the expense of cars, with light trucks rising to two-thirds of industrywide deliveries in the first quarter. The Focus is on course for a sixth straight year of annual sales declines in the U.S.

Ford will give up sales volume in car segments in order to get higher returns, Farley said. In addition the luxury Vignale and sporty ST grades, the Focus will be positioned for “adventure-oriented” consumers with an Active version and continue to be offered with the upscale Titanium trim.

“This allows us to position the vehicle more precisely for small groups of people,” he said. “The overall approach for us is quality. The quality of our participation in the segment is really our priority.”