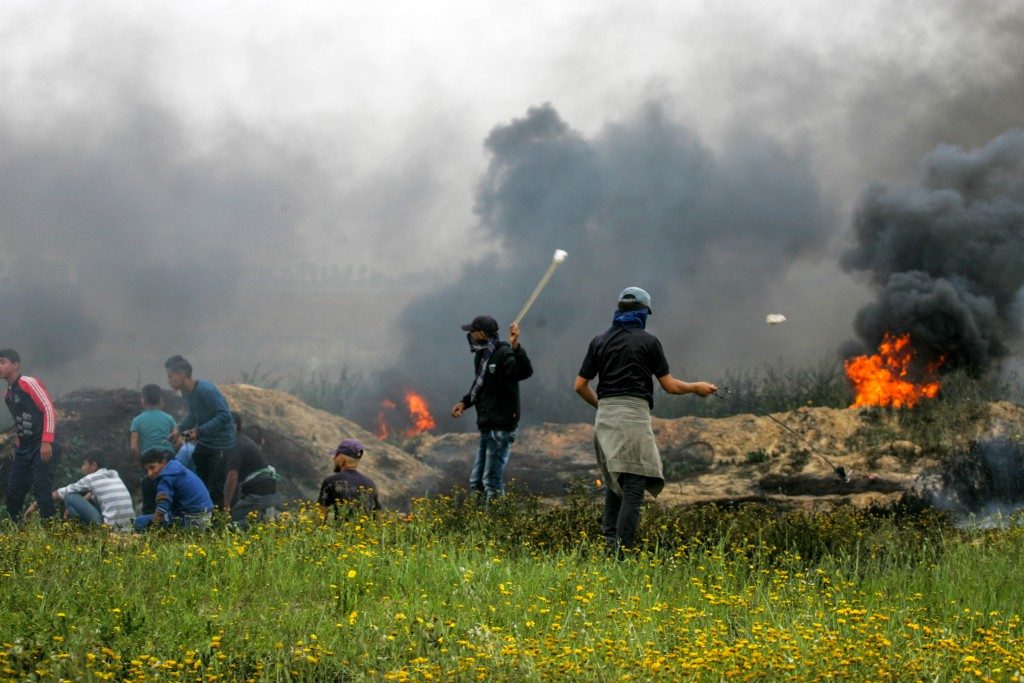 It’s a familiar pattern. The Arabs launch an offensive, Israel defends itself, the world condemns Israel. The latest version of this macabre song and dance is the so-called “March of Return” being organized by Hamas, which brings tens of thousands of Gazans to try to breach the border with Israel.

Like any sovereign country, Israel has no choice but to protect the integrity of its borders. If it allows Gazans, many of them armed terrorists, to penetrate its southern border, it will soon see similar marches from Lebanon and Syria in the north, and throughout Yehudah and Shomron, putting Jews throughout the country at risk for their lives.

The IDF has done everything possible to limit fatalities: dropping leaflets warning residents to stay away and using tear gas and other riot-control means, but when tens of thousands of people set up camp near the border and begin to march toward the fence, there comes a point when there is no choice but to shoot, sometimes to kill.

Israel, as always, is extremely careful about using live fire against those who might be innocent civilians; IDF sharpshooters are instructed to aim for below the knees when the protesters are at a certain pre-designated distance, and shoot to kill only when there is no choice (and only after receiving explicit permission from a senior officer).

The results are impressive. Some 40,000 Gazans participated in the first march, Erev Pesach, and 29 people were killed, most of them Hamas members. About half that number showed up this past Friday, and seven were killed.

But that doesn’t stop the international community, most especially the United Nations and the European Union, from issuing knee-jerk condemnations. Instead of asking intelligent questions like why Hamas is putting children at risk in provocative marches, after all, Israel doesn’t “occupy” a single inch of Gaza, the world, with the notable exception of the United States, plays right into its hands.

Hamas is in desperate need of attention. It has been forgotten even by the Arab world, which is cooperating with Israel as never before. Egypt and Israel enjoy close security and economic relations; Saudi Crown Prince Mohammed bin Salman recently acknowledged in an interview with the Atlantic that Jews have a right to their own homeland.

The tunnels Hamas invested so heavily in, at the expense of the humanitarian needs of Gaza’s residents, have been rendered ineffective by IDF technology. Its missiles have likewise lost their ability to terrorize Israeli citizens. With no other way of regaining center stage, Hamas is bringing the masses to the border in the hope of provoking fatalities, the more the better, and forcing the Arab world and the international community to revert to their traditional hostility to Israel.

As usual, the international community plays its role to a T. The United Nations Security Council drafts a statement supporting the right of Palestinians to “demonstrate peacefully” at the border. (The “peaceful” demonstrations include waving flags with swastikas and shouting slogans like “Khaybar Khaybar, ya yahud — slaughter the Jews.”) The U.N. statement also endorses Secretary-General Antonio Guterres’ call for an independent investigation into the “deadly” protests at the Gaza-Israel fence, a call that was notably absent last week when Syria was murdering dozens of civilians in airstrikes (this was before this week’s atrocity of chemical gas, which killed at least 150).

The only voice of sanity was that of the United States, which blocked the U.N. Security Council statement. The White House called on Palestinians to engage in solely peaceful protests and stay at least 500 yards from the border. Instead of condemning Israel, it correctly condemned “leaders and protesters who call for violence or who send protesters, including children, to the fence, knowing that they may be injured or killed.”

Also, as usual, left-wing groups in Israel sided with the country’s enemies. Tamar Zandberg, the newly elected chairwoman of the far-left and increasingly irrelevant Meretz party, called for an “independent” investigation into the IDF shootings, saying “it is forbidden for a policy of a light trigger finger to bring about loss of life of innocents and to ignite the region.”

B’Tselem, an extremist group that jumps at every opportunity to make Israel look bad, called on Israeli soldiers to refuse orders to open fire on protesters during clashes along the Gaza border.

The time has come for the international community and the Israeli left to stop dancing to Hamas’ tune. If they are truly concerned about the humanitarian needs of the Gaza population they must condemn Hamas for stealing funds that were meant for the public’s welfare and for putting children and other innocents at risk, just so that they can advance their own narrow political interests.

It is only when the world finally drops its anti-Israel bias that it will be able to see Hamas for what it really is: a group of undemocratic, armed thugs who do Iran’s bidding and terrorize their own people as much as Israel and the rest of the world.