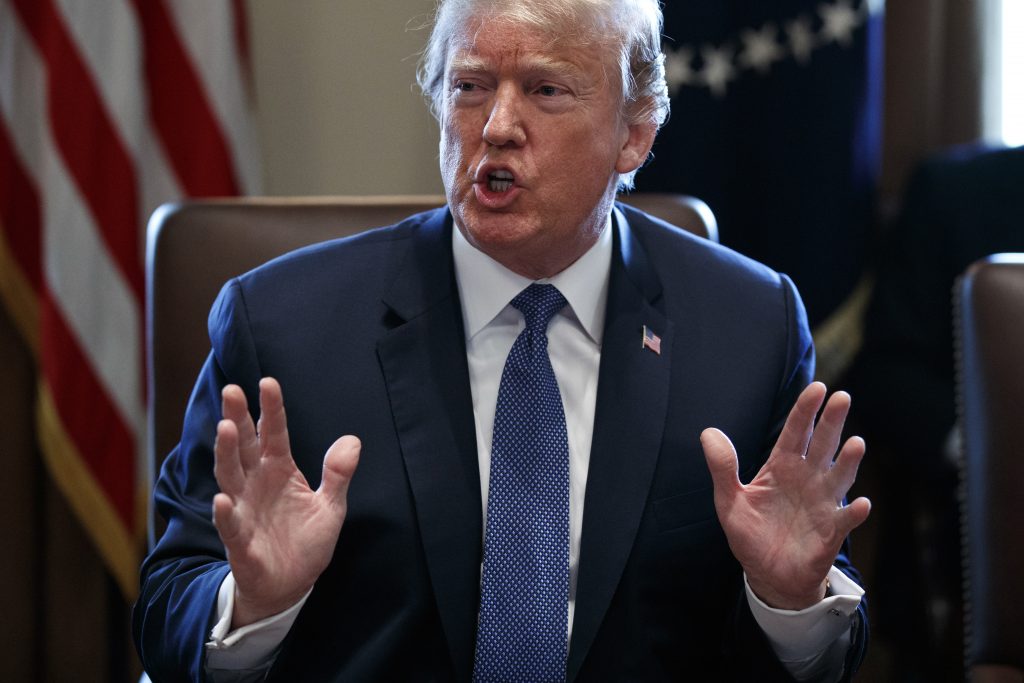 President Donald Trump said Monday he will decide “probably by the end of today” on a U.S. response to the apparent chemical weapons attack on Syrian civilians. He suggested Syria’s main military ally, Russia, would “pay a price.”

Speaking during a Cabinet meeting, Pres. Trump condemned the “heinous attack” Saturday that killed at least 40 people, including children. Asked by a reporter whether President Vladimir Putin bears responsibility, Pres. Trump said, “He may, yeah, he may. And if he does, it’s going to be very tough, very tough.” He added, “Everybody’s gonna pay a price. He will, everybody will.”

Amid the tough talk in the White House, the U.S. military appeared to be in position to carry out any attack order. A Navy destroyer, the USS Donald Cook, was underway in the eastern Mediterranean on Monday after completing a port call at Larnaca, Cyprus. The ship is armed with Tomahawk cruise missiles, the weapon of choice in a U.S. attack one year ago on an airfield in Syria after an alleged sarin gas attack on civilians at Khan Sheikhoun. The U.S. said the 2017 strike was intended to deter Syria from further use of chemical weapons.

Pres. Trump was to meet later Monday with senior national security aides. “Nothing’s off the table,” he said after condemning Saturday’s suspected use of toxic gas. “It was an atrocious attack,” he said. “It was horrible.”

Pres. Trump said the U.S. is still investigating the possible involvement of the Iranian and Russian governments.

The United States, meanwhile, was urging the U.N. Security Council to adopt a resolution that would condemn the continuing use of chemical weapons in Syria “in the strongest terms” and establish a new body to determine responsibility for chemical attacks. The draft resolution, obtained by The Associated Press, was circulated ahead of an emergency Security Council meeting.

The White House deliberations came as Russia and the Syrian military blamed Israel for a pre-dawn missile attack on a major air base in central Syria, saying Israeli fighter jets launched missiles from Lebanon’s air space. A group that monitors Syria’s civil war said the airstrikes killed 14 people, including Iranians active in Syria.

Earlier Monday, Defense Secretary Jim Mattis took aim at Russia for what he suggested was its failure to ensure the elimination of Syria’s chemical weapons arsenal. The Pentagon chief said he would not rule out a U.S. military strike against Syria in response to a suspected poison gas attack.

Over the weekend Pres. Trump threatened a “big price to pay” for the suspected poison gas attack. The government of President Bashar Assad has denied using poison gas.

Officials in Washington were seeking to verify early reports by rescuers and others that the Assad government was culpable. The Russian military, which has a presence in Syria as a key Assad ally, said its officers had visited the site in a suburb of Damascus, the Syrian capital, and found no evidence to back up reports of poison gas being used.

At a photo-taking session in the Pentagon on Monday, Mattis said “the first thing” to consider in how to respond was why chemical weapons are “still being used at all.” He noted that Russia was a guarantor of a 2013 agreement to eliminate Syria’s entire chemical weapons arsenal, suggesting Moscow shares blame for the suspected gas attack.

“And so, working with our allies and our partners from NATO to Qatar and elsewhere, we are going to address this issue,” Mattis said in brief remarks to reporters as he began a meeting with the emir of Qatar.

The U.S. military has a wide range of warplanes and other capabilities in the Middle East. They include sea-launched cruise missiles aboard ships within range of Syria.

Syria’s state news agency SANA initially said Monday’s attack on the T4 air base was likely “an American aggression,” but Pentagon spokesman Christopher Sherwood quickly denied the United States was behind the strike and the agency then dropped the accusation, blaming Israel instead.

Saturday’s suspected poison gas attack took place in a rebel-held town amid a resumed offensive by Syrian government forces after the collapse of a truce.

As U.S. officials consider whether and how to respond, they are looking at what type of chemical agent was used. When Pres. Trump ordered airstrikes last year after a chemical weapons attack, it was a response to the use of sarin gas, which is banned by the Chemical Weapons Convention that Syria has signed. An attack with chlorine, which can be used as a weapon but is not outright banned by the treaty, could raise precedent issues, as there have been numerous recent allegations of chlorine attacks in Syria that have drawn no response from the Trump administration.

One year ago this month, Pres. Trump ordered dozens of cruise missiles to be fired at a Syrian air base after declaring there was no doubt Assad had “choked out the lives of helpless” civilians in an attack that used banned gases. White House advisers said at the time that images of hurt children helped spur the president to launch that airstrike, and broadcast new shows on Sunday aired similar depictions of suffering young Syrians.

Republican Sen. John McCain of Arizona said Pres. Assad heard Pres. Trump’s signal that he wanted to withdraw from Syria and, “emboldened by American inaction,” launched the attack. In a statement, McCain said Pres.Trump “responded decisively” last year with the air strike and urged Pres. Trump to be forceful again to “demonstrate that Assad will pay a price for his war crimes.”