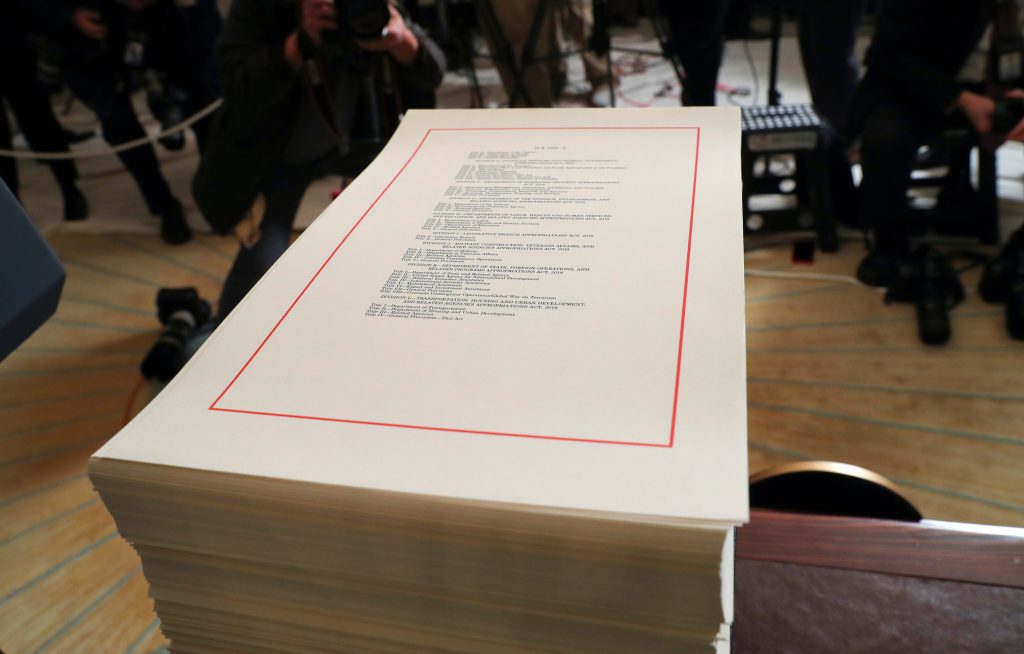 With the federal budget deficit expanding and congressional elections seven months away, the Trump administration plans to ask Congress for cuts in domestic programs that were part of a bipartisan $1.3 trillion spending bill that President Donald Trump signed last month.

The White House doesn’t want to touch extra funding for the military, border security and combating the opioids crisis in a package of proposed cuts it will send to Congress in the coming weeks, according to an administration official, who asked for anonymity to outline the plan.

House Majority Leader Kevin McCarthy of California has been working with the White House on using a budget maneuver called rescission, a Republican aide said. The size of the cuts that might be sought and a timetable for a congressional vote hasn’t been decided.

Any attempt to roll back spending is sure to trigger a backlash from Democrats who negotiated the extra domestic funding in exchange for agreeing to a bigger budget for the Pentagon. Although Democrats wouldn’t be able to block it, some Republicans may be reluctant to blow up one of the few bipartisan agreements that have made it through the House and Senate.

“The administration is working to identify potential rescissions and at this point, there is no completed list or dollar amount,” White House budget office spokeswoman Meghan Burris said.

The spending bill passed the House on a 256-167 vote and the Senate on a 65-32 vote last month after Republican leaders urged rank and file to support the military increases despite the increases for domestic priorities. The 2,232-page measure was the result of more than a month of negotiations between Republicans and Democrats in Congress to end a cycle of government shutdown threats and stopgap spending bills.

Although the White House was part of the negotiations, Pres. Trump called the bill “ridiculous” and fumed over the lack of funding for the $25 billion southern border wall he promised to build during his presidential campaign. He threatened to veto it but backed down under the threat of a March 23 government shutdown.

Along with the $1.5 trillion tax cut law, the additional spending is likely to balloon the federal budget deficit, which is on track to hit $1 trillion next year. That would take away one of the main lines of attack Republicans have used against Democrats in recent years — runaway federal spending — as they are trying to fend off a strong challenge to their control of the House in the November elections.

The rescissions request makes use of an obscure provision in the 1974 Budget Act that allows the president to request the cancellation of some spending and gives Congress 45 days to approve the measure. Under a 1992 precedent in the Senate that limits debate, Republicans likely could pass the bill without any Democratic support.

It still would be difficult to pass in the Senate, according to another Republican aide. That’s because appropriations panel members would be concerned that making an end run around Democrats would take away incentives to negotiate on future legislation.

“Advancing a rescission package like the one described would lay waste to the notion that Republican leadership negotiated the omnibus in good faith and poison the well for future responsible, bipartisan legislating,” said Matthew Dennis, a spokesman for House Appropriations Committee Democrats on Friday.

Steve Bell, a former Senate Republican budget aide of the Bipartisan Policy Center predicted that because of this, the package will face difficulties in the Senate and may not even be introduced.

Bell said he expects the White House will likely attempt to bring non-defense discretionary levels down by $120 billion to put it in line with the Trump 2018 budget.

Steve Ellis of Taxpayers for Common Sense, a spending watchdog group, said the larger the request from Pres. Trump, the more difficult it will be.

“Unless it’s a really targeted package that just focuses on some egregious waste, it is going to get enough people ticked off that it won’t go through” he said.

Budget watchdogs say they would welcome the chance to reduce the roughly $150 billion spending increase in the omnibus bill.

“I don’t have a view yet on this particular process, but certainly we overspent for FY 2018 and if we can pare the funds backs a bit – both on the defense and non-defense side – that would be an improvement,” Marc Goldwein of the Committee for a Responsible Federal Budget said.