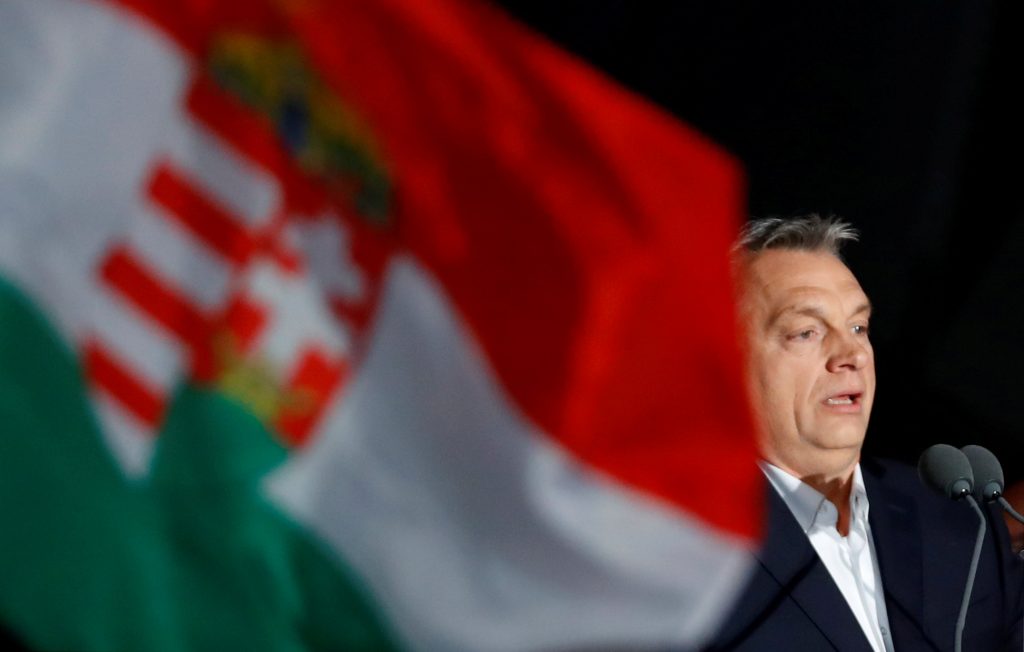 Prime Minister Viktor Orban could use his sweeping new political mandate to extend Hungary’s crackdown on civil organizations that have been critical of his anti-immigration policies.

The right-wing nationalist projected himself as a savior of Hungary’s Christian culture against Muslim migration into Europe, an image which resonated with over 2.5 million voters, especially in rural areas.

His Fidesz party won a two-thirds majority for the third straight time in Sunday’s election, meaning he has the powers to change constitutional laws.

The victory could embolden Orban to put more muscle into a Central European alliance against EU migration policies, working with other right-wing nationalists in Poland and Austria, and further expose cracks in the 28-nation European Union.

The European Commission said it was looking forward to working with Hungary on many challenges.

On Monday, a spokesman for Fidesz said one of the first laws to be passed by the new parliament could be legislation that would empower the government to ban NGOs that support migration and pose a “national security risk.”

Janos Halasz, a Fidesz spokesman cited by state news agency MTI, said the new parliament which could be formed by the end of April could pass the law among its first pieces of legislation.

A Fidesz spokesman told state radio on Monday: “After parliament is formed, at the end of April … in early May in the next parliament session we can start work … that is needed in the interest of the country, which could be the Stop Soros legal package.”

One non-governmental organization described the prospect of the bill as “terrifyingly serious.”

Among the measures floated before the election were mandatory registration of some non-government organizations that “support illegal immigration,” a 25 percent tax to be imposed on foreign donations that such NGOs collect, and activists could face restraining orders that preclude them from approaching the EU’s external borders in Hungary. Those borders have been fortified since a migrant influx in 2015.

Last month, Orban told state radio that the government had information on activists being paid by Soros.

“We know by name who they are and how they work to transform Hungary into an immigrant country. That’s why we drafted and submitted the Stop Soros bill which qualifies immigration as an issue of national security,” Orban said before the election.

Soros has rejected the government campaign against him as “distortions and lies” meant to create a false external enemy.

According to preliminary results with 99 percent of votes counted, National Election Office data showed Fidesz winning 133 seats, a tight two-thirds majority in the 199-seat parliament. Nationalist Jobbik won 26 seats, while the Socialists were projected as third with 20 lawmakers.

Some of the NGOs that could be hit by the new law said they expected a hardening in the new government’s stance.

“I think what the ruling party promised during the campaign will now come to pass,” Hungarian Civil Liberties Union director Stefania Kapronczay said. “This was a key promise to stop the Soros organizations, whatever that may mean. With a two-thirds majority there can be no doubt they can and will do it.”

“This is terrifyingly serious,” she said.

Transparency International Legal Director Miklos Ligeti said for the time being they considered Halaszs’s comment “a political declaration made in the heat of an election victory.”

Ligeti added that if the government submitted the version already published earlier this year, it should await the opinion of the European Council’s Venice Committee, which has said it would scrutinize all three laws in the package.

Orban, Hungary’s longest-serving post-communist premier, opposes deeper integration of the EU and – teaming up with Poland – has been a fierce critique of Brussels’s policies.

Since coming to power in 2010, his government has locked horns with the European Commission over reforms, which critics say have eroded democratic checks and balances and weakened the independence of the media.

His critics say Orban has put Hungary on an increasingly authoritarian path and his stance on immigration has fueled xenophobia in the Central European country.

French far-right leader Marine Le Pen, president of the National Front, was the first to congratulate Orban on Sunday.