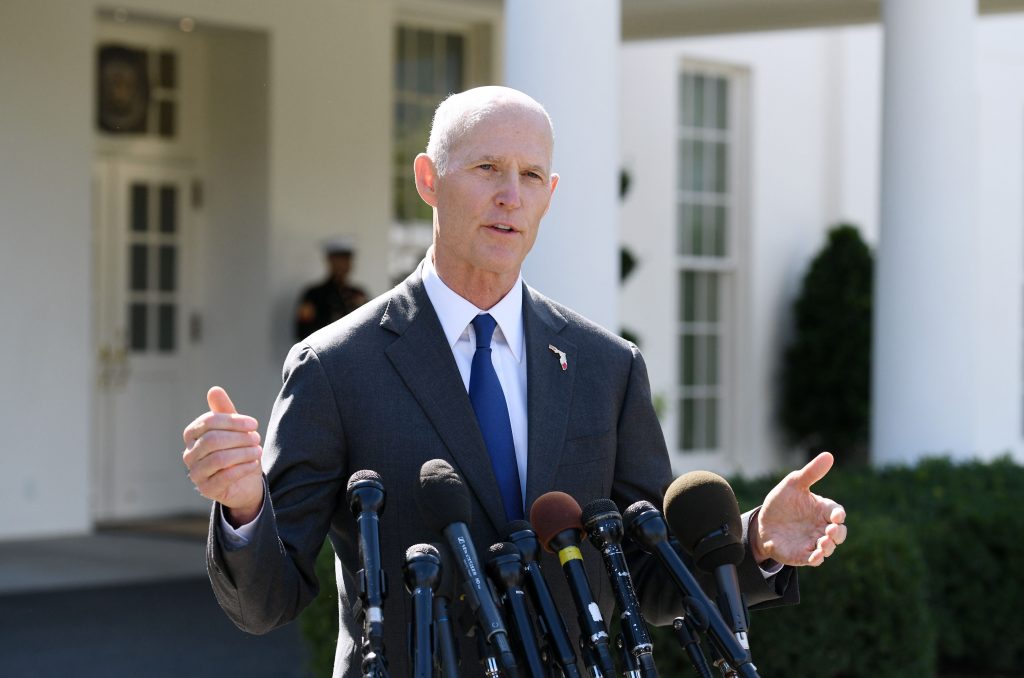 Florida Gov. Rick Scott, a close ally of President Donald Trump, formally entered the race for a U.S. Senate seat on Monday, kicking off a marquee contest against Sen. Bill Nelson, D-Fla., that has major implications for control of the Senate next year.

Scott, a Republican, made the announcement in a video distributed on Twitter, framing himself as an outsider to a dysfunctional Washington.

“It’s time to shake that place up,” Scott said. “We don’t need another politician in Washington. It’s full of politicians, and that’s why it’s broken.”

Scott’s announcement sets the stage for what is expected to be one of the most expensive races in the country, taking place in a swing state that was a key to Pres. Trump’s 2016 victory. It also offers a test of whether a tight alliance with Pres. Trump provides more help or harm in the current political environment.

For months, Pres. Trump and Republican party leaders have been trying to coax Scott to challenge Nelson, who is seeking his fourth term and has been stepping up appearances across Florida, the nation’s third most populous state.

Scott’s long-expected entrance into the race makes it instantly competitive and will force Democrats to devote considerable resources that they would otherwise be able to spend elsewhere as they try to wrest control of the Senate from Republicans. The GOP currently holds a narrow 51-49 majority in the chamber.

Democrats are defending 10 seats in states Pres. Trump won in 2016, including Florida.

Scott, a two-term governor, has been preparing for a campaign for weeks, huddling with donors and building a campaign team. This will be the first run for federal office for the 65-year-old who made a personal fortune as a health-care executive.

Nelson is expected to highlight Scott’s ties to Pres. Trump in a state that Pres. Trump only narrowly carried over Democrat Hillary Clinton.

Scott was an early cheerleader for Pres. Trump – he led a super PAC that supported Pres. Trump’s bid – and Pres. Trump has been publicly twisting Scott’s arm to run for the Senate for months.

That included during a September visit by Pres. Trump to Florida to survey hurricane damage. After praising Scott for doing an “incredible job” as governor, the president added: “I hope this man right here, Rick Scott, runs for the Senate.”

In an interview Sunday with Politico, Scott pushed back when asked if he considers himself a “Donald Trump Republican.”

Nelson, a former astronaut, is a political veteran, having also served for more than a decade in the U.S. House and as state treasurer, insurance commissioner and fire marshal in Florida. While mostly aligning with his party on major issues, Nelson has also sought to appeal to centrist voters by working with Republicans. Last year, he collaborated with Sen. Susan Collins, R-Maine, on a health insurance measure.

On Monday, Nelson, who is the top Democrat on the Senate Commerce committee, was planning to meet with Mark Zuckerberg, a day before the Facebook chief executive officer is scheduled to testify to the panel about privacy issues.

During an appearance last month in Florida, Nelson said that he was ready for a challenge by Scott.

“It’s going to be clearly a set of contrasts on so many issues, from the environment to sea level rise to oil drilling off the coast, to the expansion of Medicaid in Florida,” Nelson told reporters. “I mean the list just goes on and on and on.”

Democrats are planning to cast Scott as an out of touch politician only interested in himself.

“Rick Scott has spent seven years ignoring Florida’s middle class, while enriching himself and his political cronies by millions of dollars,” said Joshua Karp, a spokesman for American Bridge, a super PAC that promotes Democratic candidates.

The Democratic Senatorial Campaign Committee, which has been gearing up for a possible Scott bid for months, last week hit on the same theme, debuting a “Self-Serving Scott” website that claims that “Rick Scott is a self-serving politician who will say and do anything to help himself at Floridians’ expense.”

Less than two hours before Scott’s announcement on Monday, the DSCC also circulated a 2015 editorial from the Tampa Bay Times that referred to Scott as “the state’s worst governor in the last half-century” after he declined to take Medicaid expansion funding.

Guns could emerge as a central issue in the campaign. Weeks after the deadly mass shooting at a Florida high school in February, Scott signed new gun regulations into law, defying the National Rifle Association.

His decision could boost his appeal to centrist and Democratic voters who have been very vocal about wanting new gun control. But it could also alienate him from conservative gun owners who don’t like to see new restrictions on firearms.

While Scott and Pres. Trump have differed on guns, immigration and several others issues, they are widely seen as tightly aligned, as Scott has been a frequent guest at the White House and Mar-a-Lago, the president’s estate in Palm Beach.

Scott’s close relationship with Pres. Trump was also highlighted in January, when the administration agreed to rule out oil and gas drilling off Florida’s coast after Scott voiced strong opposition. The announcement came shortly after Interior Secretary Ryan Zinke had moved to allow new drilling in nearly all United States coastal waters.

One emerging complication for Scott is his relationship with Sen. Marco Rubio, R-Fla. While Rubio has said he supports Scott’s campaign, the two have a difficult past that has flared in recent weeks. Rubio has also said nice things about Nelson, irking some of the governor’s allies.

Next week, Scott, who is term-limited in his current post, is expected to travel to Washington to raise money for his campaign, according to three Republicans familiar with his plans.

Party power brokers have been in contact in recent days to make arrangements for Scott’s trip. The Republicans said Scott is expected to be in Washington on April 19. They spoke on the condition of anonymity to describe plans that had not been announced publicly.

There has been talk among Scott’s close associates about amassing more than $100 million for his bid. Scott can put his own money into the campaign, but those close to him say he will rely most heavily on funding from donors.

Scott appeared before a crowd of supporters in Orlando on Monday morning as his announcement video was released. He is scheduled to attend an afternoon event at a citrus packing house in Fort Myers.