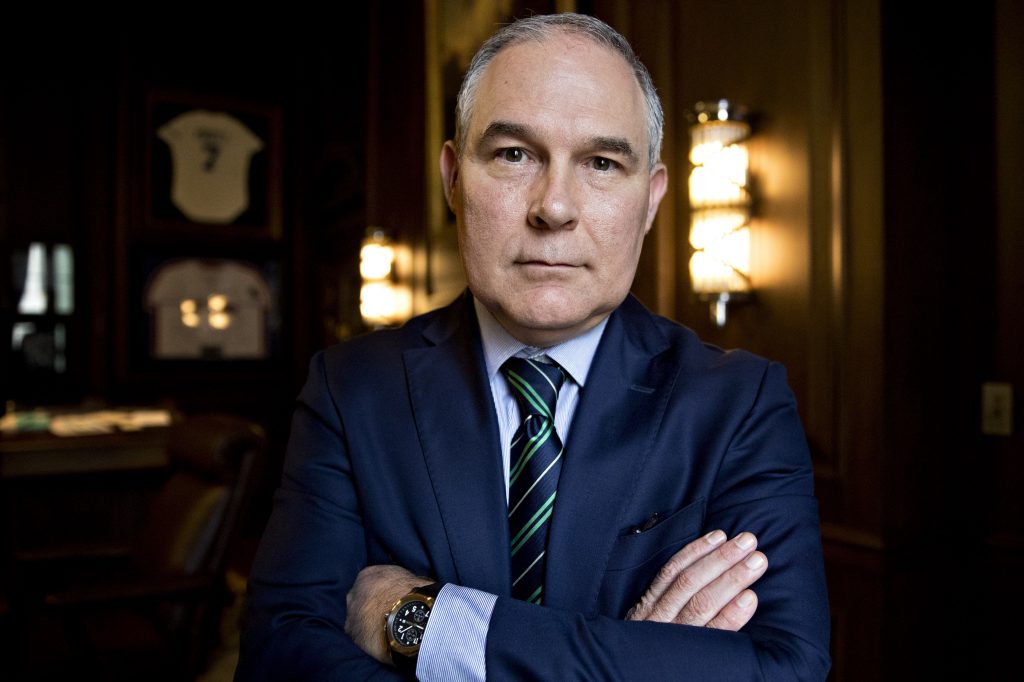 David Apol, the acting director of the Office of Government Ethics, urged the EPA’s top ethics officer to dig into the issues amid mounting scrutiny of Pruitt’s rental, his frequent reliance on first-class airfare and the agency’s decision to boost the salary of two top aides.

“Public trust demands that all employees act in the public’s interest, and free from any actual or perceived conflicts,” Apol said in the letter dated April 6.

“The success of our government depends on maintaining the trust of the people we serve,” Apol wrote Kevin Minoli, the EPA’s principal deputy general counsel and its designated ethics official. “The American public needs to have confidence that ethics violations, as well as the appearance of ethics violations, are investigated and appropriately addressed.”

The letter comes amid a flurry of questions about some of Pruitt’s practices as EPA administrator. Pruitt has come under fire for raises worth tens of thousands of dollars for two close aides over the objections of the White House, and taking first-class flights, as well as reports that several EPA staff members who questioned his practices were transferred to other jobs. EPA officials have defended Pruitt’s first-class airfare as necessary to ensure the administrator’s security.

Many prominent conservatives are rallying behind Pruitt. President Donald Trump also has defended Pruitt’s spending on personal security and his $50-a-night room lease from an energy lobbyist’s wife, which have prompted calls for Pruitt’s resignation and a House investigation.

“While security spending was somewhat more than his predecessor, Scott Pruitt has received death threats because of his bold actions at EPA,” Pres. Trump said in a Twitter message late Saturday. “Rent was about market rate, travel expenses OK. Scott is doing a great job!”

Under unusual rental terms, Pruitt was able to pay $50 per day to lease a bedroom in a condo steps from the U.S. Capitol — but only on the nights he stayed there. In all, Pruitt paid $6,100 to use the room for roughly six months last year, according to canceled checks with irregular dates, sometimes coming six weeks apart. Under the lease terms, Pruitt was required to leave his bedroom door unlocked and was barred from using common areas, which continued to be a venue for dinner parties and meetings during his stay.

Minoli hastily conducted a review of the arrangement after it was reported by ABC News, concluding the deal did not violate laws barring federal officials from accepting gifts because it was “market value.” But in a follow-up memo on April 4, Minoli stressed that his initial assessment was focused on the lease agreement itself — not whether its terms were followed or whether there were violations of other ethics laws, including a requirement that government employees act impartially.

Pruitt rented the bedroom from health-care lobbyist Vicki Hart, whose husband J. Steven Hart is the chairman of Williams & Jensen. Although Steven Hart said he didn’t personally lobby the EPA in 2017 or this year, some of his corporate clients had pending matters with the agency. And other Williams & Jensen employees have disclosed lobbying the EPA since Pruitt took over the agency last year.

Over two pages, Apol outlined a handful of allegations he said warrant further investigation, even beyond the condo deal. Among them: questions about Pruitt’s expenses for travel and security, the salaries of some employees and allegations that a subordinate helped with his housing search in Washington. Apol also cited reports that Pruitt reassigned or demoted staff who questioned spending decisions and other agency action.

Pruitt has been criticized for making frequent official trips that included weekends in his home state of Oklahoma, a matter Apol said raises concerns “about whether the administrator is using his public office for personal gain in violation of ethics rules.”

The EPA’s inspector general already is probing Pruitt’s travel and has been asked to investigate the condo rental and other allegations. Apol appeared to encourage Minoli to take a direct role.

“Agency officials are generally in the best position to ascertain the relevant facts and address any individual conflicts of interest or systemic deficiencies in agency programs or procedures,” Apol said. The Office of Government Ethics “expects that the EPA will review and analyze the alleged conduct.”