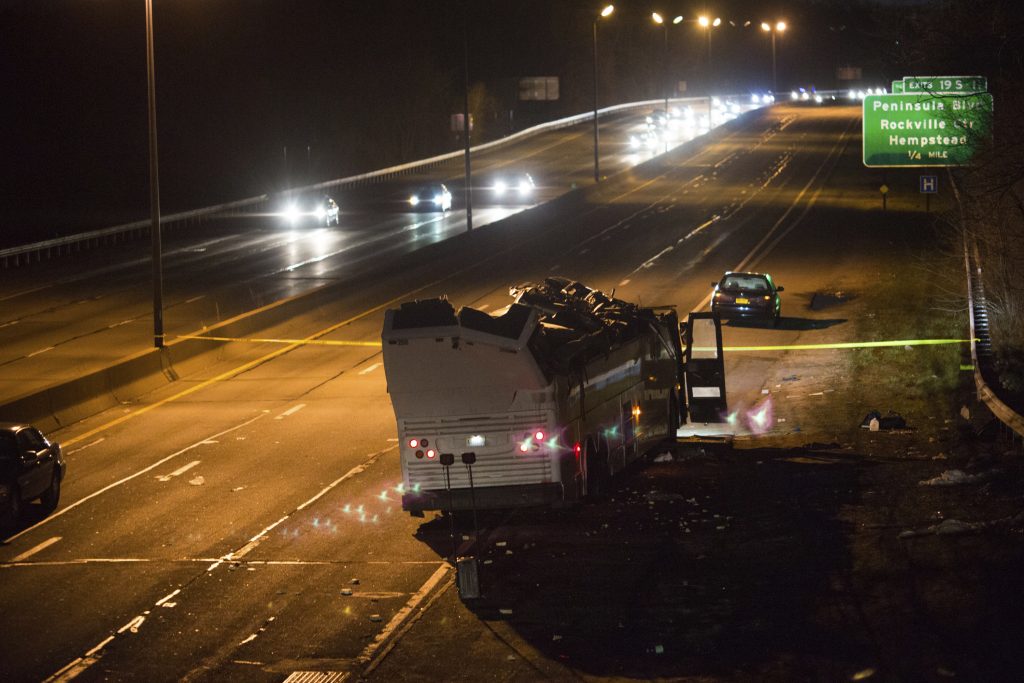 The out-of-state driver was using a non-commercial GPS device that didn’t warn him about the hazard in time to prevent an accident, police said on Monday.

State police Major David Candelaria said the driver never slowed down before slamming into the overpass on the Southern State Parkway, where buses, tractor-trailers and other commercial traffic are banned.

“There [were] no signs of braking, stopping, anything like that,” Candelaria said.

The driver also didn’t have the benefit of a high-tech warning system being installed by the state Department of Transportation that uses electronic sensors that emit invisible beams to detect any trucks or buses heading toward low overpasses along parkways built in the 1930s and 1940s for cars alone. The devices were recently installed near the site of the wreck but were still being tested, Department of Transportation spokesman Joseph Morrissey said.

“Safety is our top priority, and while we can’t comment on an ongoing investigation, throughout this area there is signage indicating height restrictions and making clear that commercial vehicles are prohibited from driving on parkways,” Morrissey said.

A roadside sign posted by the state on the overpass in Lakeview says the clearance at its lowest point is 7 feet, 7 inches. The height of the bus was believed to be about 12 feet.

Police hadn’t determined whether the driver, Troy Gaston, of Bethlehem, Pennsylvania, would be charged, Candelaria said. Though it was the first time in recent memory that a bus had hit an overpass on the parkway, there have been several accidents involving tractor-trailer drivers who are unfamiliar with the route, he said.

Two 17-year-old girls remained hospitalized on Monday with serious injuries from the crash. They were part of a group of 38 students and five chaperones who had arrived at John F. Kennedy International Airport after a spring break trip to Europe and were heading to a drop-off location in Huntington Station.

Passengers reported hearing someone yell “Duck!” as the bus approached the overpass, Candelaria said, but it was unclear if it was the driver.

Gaston showed “tremendous remorse and is very upset over the accident,” the police official added.

In 2010, a double-decker bus driver with a personal GPS crashed into an overpass near Syracuse, killing four passengers. He was using the device to find his way to a bus station and passed 13 low-bridge warning signs, some with flashing yellow lights, before the wreck, authorities said.

On Monday, the Federal Motor Carrier Safety Administration urged truck drivers on Twitter to “always use a PROFESSIONAL-GRADE GPS that provides critical route restrictions, such as low bridge overpasses.”