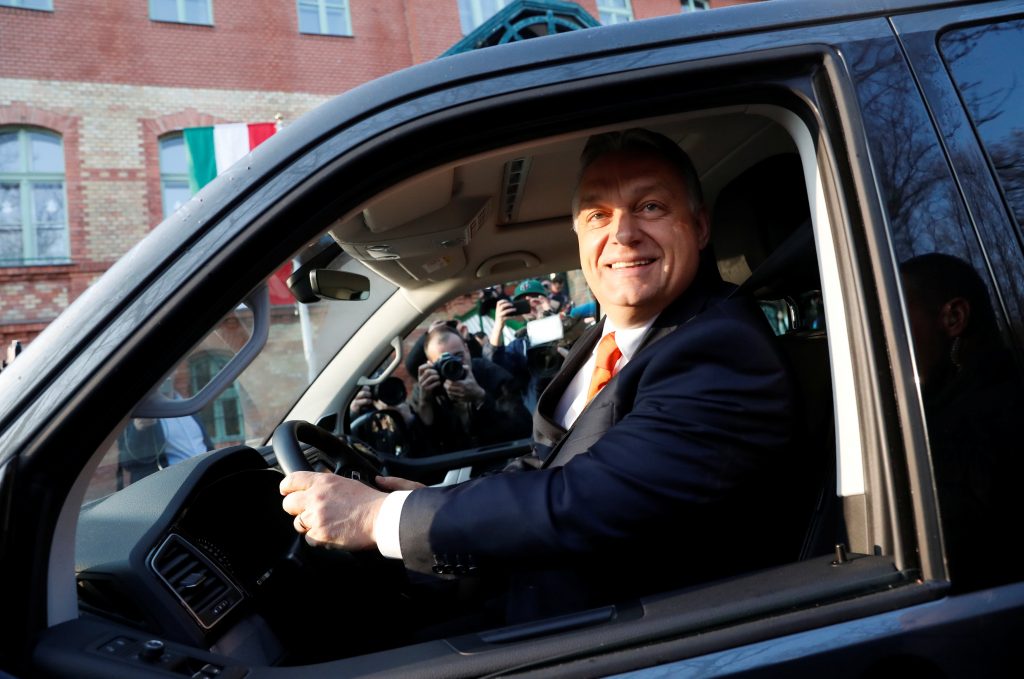 Hungary’s Viktor Orban, a hard-liner on immigration in Europe, pledged to “fight” for his country after casting his vote on Sunday in an election that was expected to give him his third consecutive term, and fourth overall since 1998, in office.

After an acrimonious campaign in which Orban projected himself as a savior of Hungary’s Christian culture against Muslim migration into Europe, all opinion polls put his Fidesz party well ahead.

A strong victory could embolden him to put more muscle into a Central European alliance against the European Union’s migration policies. Orban, Hungary’s longest-serving post-communist premier, strongly opposes deeper integration of the bloc.

A landslide win would make Orban feel vindicated in his decision to run a single-issue campaign, arguing that migration posed a big security threat. His critics said his stance has fueled xenophobia in Hungary.

After casting his vote in a wealthy district of Budapest, Orban said Hungary’s future was at stake in the vote.

“From here I will go and take part in mobilizing voters… I voted for Fidesz and I am asking everyone to take part in the election,” Orban told a group of dozens of journalists.

Asked whether he was fighting the EU he said: “The EU is not in Brussels. The EU is in Berlin, in Budapest, in Prague and in Bucharest.”

He reiterated he would stand up for Hungary’s interests and said Hungary was a loyal member of international organizations.

“We love our country and we are fighting for our country,” Orban said.

A strong win for Orban would also boost other right-wing nationalists in Central Europe, in Poland and in neighboring Austria, and expose cracks in the 28-nation EU.

“After Bavaria, Italy, the Czech and Austria have made it clear they are against immigration, now it is Hungary’s turn,” Orban told website Origo in an interview published on Sunday.

The EU has struggled to respond as Orban’s government has used its two landslide victories in 2010 and 2014 to erode democratic checks and balances, by curbing the powers of the constitutional court, controlling the media and appointing loyalists to key positions.

Orban has far-right admirers across Europe who like his tough line on migrants. He is also credited with keeping the budget deficit under control, reducing unemployment and some of Hungary’s debt, and putting its economy on a growth track.

On Friday, at his closing campaign rally, Orban vowed to protect his nation from Muslim migrants.

“Migration is like rust that slowly but surely would consume Hungary,” he said.

The fierce anti-immigrant campaign has gone down well with around two million core voters of Fidesz.

“Migrants should not come here, and this (Fidesz’s) economic policy should continue,” said Janos Dimovics, a pensioner who came from his village to see Orban. He had always voted for Fidesz and praised Orban’s policy to support families.

In March the government also gave pre-election handouts to millions of families and pensioners.

According to a poll by Zavech research institute published on Friday, Fidesz had 46 percent support among decided voters, while former far-right Jobbik, which has reshaped its image into a more moderate force, had 19 percent. The Socialists came in third with 14 percent. Voter turnout was estimated between 64 and 68 percent.

However, the polls could be unreliable as one-third of voters are undecided and many hide their voting preference.

There is also a slight chance that the fragmented opposition could strip Fidesz of its parliament majority if voters frustrated with Orban’s policies choose tactical voting in the 106 constituencies.

In 2014, Fidesz won a two-thirds majority in the 199-seat parliament with 133 seats. That looks less likely now.

If Orban wins he is expected to carry on with his current economic policies — with income tax cuts and incentives to boost growth.

His business allies are also expected to expand their economic domains. Businessmen close to Fidesz have acquired stakes in major industries like banking, energy, construction, and tourism, profiting from EU funds.

“Only a dramatic outcome of the election would force a significant shift in the direction of policymaking,” Barclays said in a note.

It said pragmatism was likely to prevail given the importance of EU structural funds for Hungary which would probably avoid an all-out conflict with the EU.