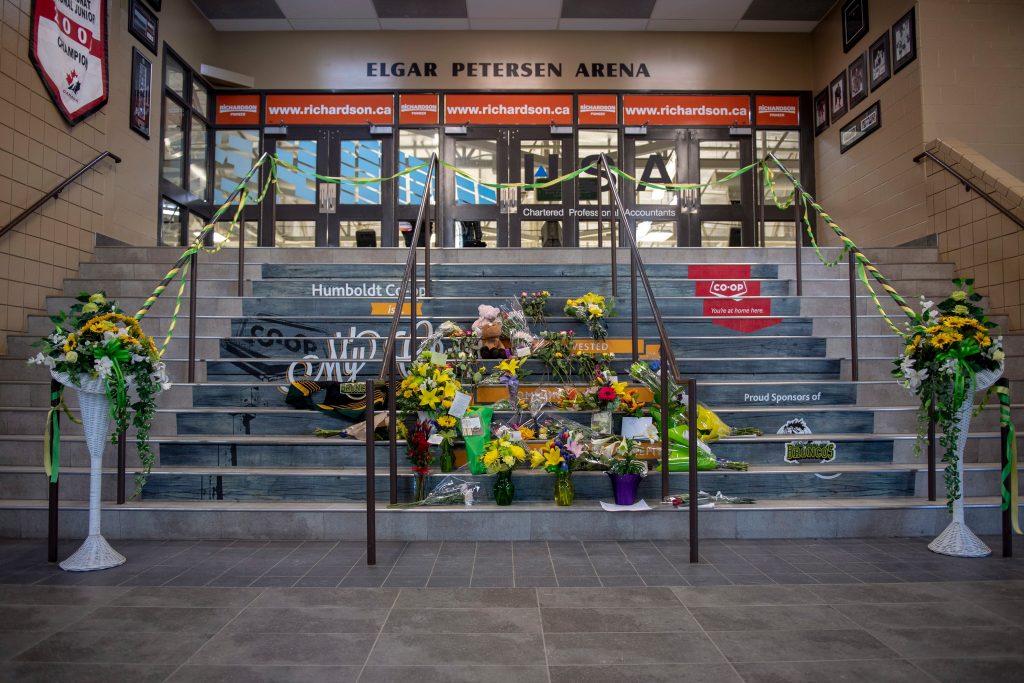 A hockey arena became the epicenter of grief for a small Canadian town on Sunday, as friends, relatives and those that housed the young hockey players gathered to mourn 15 people killed after a semi-trailer slammed into a bus carrying a youth hockey team in western Canada.

Fourteen were also injured, some critically, in a collision that left a country, its national sport and the town of Humboldt, Saskatchewan, reeling.

The bus had 29 passengers, including the driver, when it crashed at about 5 p.m. Friday on Highway 35, police said. Among the dead the head coach Darcy Haugan, team captain Logan Schatz and radio announcer Tyler Bieber.

Residents of this town of less than 6,000 have been leaving flowers, team jerseys and personal tributes on the steps of the arena’s entrance, forming a makeshift memorial.

While most of the players were from elsewhere in western Canada, they were put up by families in the small town of Humboldt. Billeting families are a large part of junior hockey, with players spending years with host families.

Dennis Locke, his wife and three young children came to the arena to hang posters of forward Jaxon Joseph. The Locke family housed Joseph and treated him like a son.

“Best person ever,” Locke said. “Down to earth, loved playing with the kids.”

His wife wiped away tears from swollen eyes.

Forward Logan Hunter and defensemen Stephen Wack, Adam Herold and Xavier Labelle were also among the dead, according to family members and others. Assistant coach Mark Cross, bus driver Glen Doerksen and stats keeper Brody Hinz, who was 18, were also killed.

The names of all the dead and injured have not been released by police.

He said players become part of the community fabric, doing volunteer work or serving in restaurants. Three players who billeted by the same family all died in the crash, he added.

“They lost them all,” Mattock said.

A vigil will be held on the hockey team’s home ice on Sunday night, and a makeshift stage and hundreds of chairs sit ready for the memorial.

“We’re devastated,” said hockey club Vice President Randolph MacLean. “At the center of this, we have 15 souls who’ll never go home again. We have 29 lives that will never be the same.”

MacLean said the community comes together at the arena on game nights that draw 800 to 1,000 people to the stands.

“It’s an energy that spreads through the town with road signs saying ‘game tonight,’ tickets for sale everywhere,” he said.

As is the case with small town hockey across Canada, he said, the arena is not just a recreation facility, but a focus of community life with the hockey team at its center.

With players who billet by local families, work in city businesses and attend local schools, MacLean said the tragedy touches every corner of Humboldt.

Canadian police said the truck driver, who was not hurt, was initially detained but has since been released and provided with mental health assistance. Royal Canadian Mounted Police Assistant Commissioner Curtis Zablocki said it’s too early to state a cause for the crash.

Photographs of the wreckage showed the twisted trailer with most of its wheels in the air and the bus on its side with its back portion destroyed. The force of the crash sent both vehicles into the ditch at the northwest corner of the intersection.

The tractor-trailer would have had to yield to a stop sign before crossing over the highway that the hockey bus was travelling on. There is a stand of trees on the southeast corner of the intersection, limiting visibility of the approach on both roads.

Police said that many issues have to be investigated, including weather conditions at the time and any mechanical issues with the vehicles.