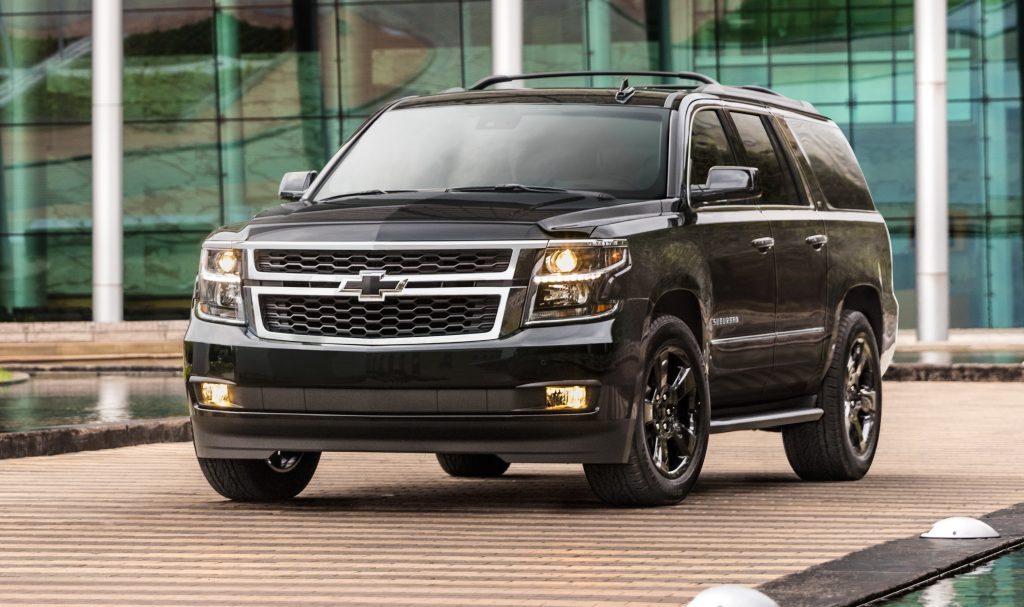 Chevrolet’s cool-looking Z71 Midnight Edition package is offered on Tahoe and Suburban sport utilities, as well as on the Silverado pickups.

Over the past year, I’ve tested Silverado 1500 and Tahoe models with the Midnight package, and this past week, I also got to spend time in the Suburban version, which is 20.3 inches longer than the similarly equipped Tahoe.

The Suburban is Chevrolet’s original sport utility vehicle, introduced in 1935 and a star of the Chevy lineup ever since, particularly in Texas, where it’s among the most-popular motor vehicles ever.

Like its siblings, the Suburban has great road presence, and is quite hard to ignore. That’s made even more so by the Midnight Edition’s jet-black exterior color, along with blacked wheels and body trim.

We also had a Chevy MyLink audio/navigation system with eight-inch color touch screen ($495) and a power sunroof ($995). Dealer-installed wheel locks were an additional $70.

Our Suburban was powered by a 5.3-liter Ecotec3 V-8 engine with 355 horsepower and 383 foot-pounds of torque. It was paired with a six-speed automatic transmission, although Chevrolet now offers a 10-speed automatic with the optional 6.2-liter V-8.

With three rows of seats, the Suburban can carry up to eight passengers — two up front, and three each in the middle and third rows. But our tester came with power second-row bucket seats ($795), which replaced the second-row bench seat, and cut the passenger capacity to seven.

The 39.3 cubic-foot cargo area behind the third row is big enough for luggage and sports gear for a long family trip. With the third row folded, it expands to 76.7 cubic feet; and with middle and rear seats folded, there is 121.7 cubic feet of cargo space.

For 2018, Suburban prices begin at $50,200 (plus freight) for the base rear-wheel-drive LS model. It’s available with four-wheel drive at all trim levels. There is a rotary dial on the dash to the left of the steering column that has settings for 2WD, Automatic, 4WD High or 4WD Low, which is a low-range setting for serious off-road driving.

The Suburban is a very pleasant highway vehicle, with a quiet cabin, smooth ride, and a more-efficient powertrain than the previous generation.

It has a 31-gallon fuel tank, compared with 26 gallons for the Tahoe. EPA ratings for our four-wheel-drive tester were 15 mpg city/22 highway/18 combined. During our week in the Suburban, with about a 60-40 mix of highway-city driving, we averaged just over 18 mpg.

Inside, the heated leather front bucket seats were quite comfortable, with power adjustments for driver and passenger. There were power-adjustable pedals, with memory for the driver’s seat and the pedals.

There was plenty of power from the 5.3-liter engine, and with the four-wheel drive, the Suburban can tow trailers weighing up to 8,000 pounds.

To help boost fuel economy, the engine has technologies such as direct fuel injection, continuously variable valve timing and an advanced combustion system.

Included on all models is a four-wheel antilock disc-brake system featuring the GM Duralife brake rotors, designed to last twice as long as conventional rotors.

For connectivity, the Suburban has a 4G LTE Hot Spot (built-in Wi-Fi) that’s active when the ignition is on, allowing everyone in the vehicle to connect to the Web. Our vehicle also had GM’s OnStar system and SiriusXM satellite radio.

We had a 12-volt DC and two USB ports in the cubby in front where there is a small open cubby perfect for portable devices; there is also a nifty hidden compartment behind the audio-nav touch screen, opened by a touch of a button below the screen, with a USB port inside. It’s perfect for hiding away your smartphone. There were two USB ports, an auxiliary input and another 12-volt outlet inside the center console, which also doubled as an armrest for the driver and front passenger.

There were seatback pockets on the front seats, accessible to the middle row, and there were also air conditioning controls, a 115-volt AC outlet, and a 12-volt outlet for the rear passengers.

With $7,500 in options and the freight charge added to the base price, the total sticker price for our 2018 Suburban LT Z71 Midnight Edition four-wheel drive was $67,075.

Highlights: The Suburban, last redesigned for 2015, is a sturdy family hauler with lots of power, a smooth ride, and a long list of standard and optional convenience and safety features. It’s the long version of the Tahoe, with extra cargo space.

Negatives: Can get pricey, especially with options.