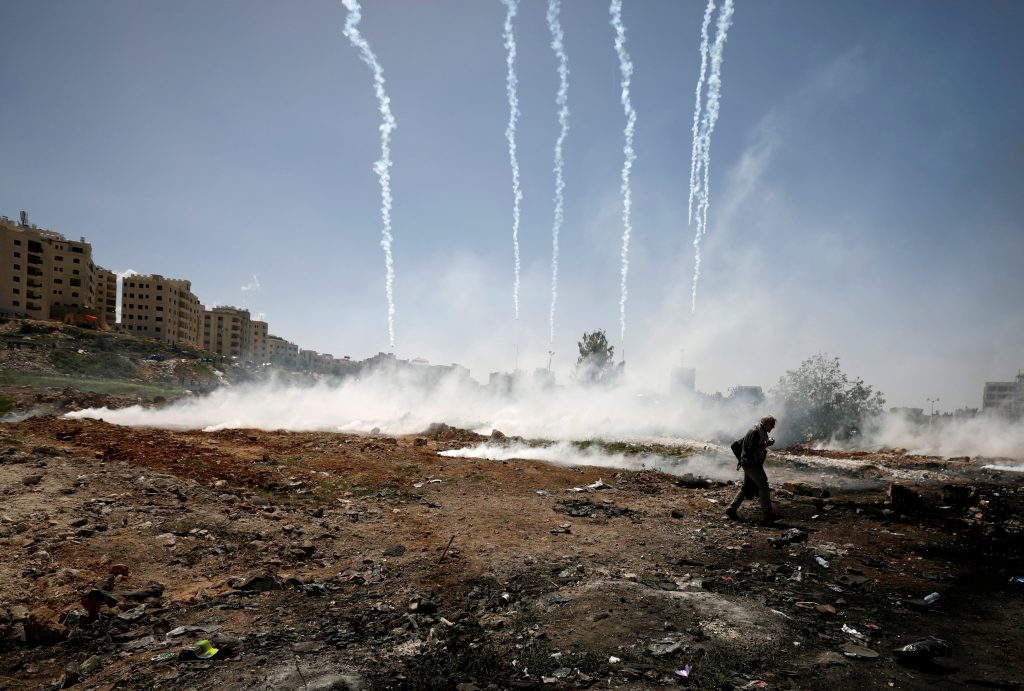 Prime Minister Binyamin Netanyahu on Motzoei Shabbos praised the work of Israeli security forces, who for a second week in a row successfully held back Arab mobs at the Gaza border fence with a minimum of casualties. “These rioters present themselves as human rights activists, but the hold up a Nazi flag,” the Prime Minister, referring to a Palestinian flag that sported a swastika that was prominently displayed at the riots in Gaza Friday. “They speak in the name of human rights, but their objective is to erase the Jewish state. We will not let them do this. We will remain strong, and continue building our land,” he added.

Once again Friday, some 20,000 rioters massed on the Gaza border fence, attempting to breach it and enter Israel. IDF soldiers held the rioters back at five main points along the border fence. Security forces eliminated ten terrorists who attempted to breach the fence, or who threw firebombs at Israeli forces. In an attempt to blind Israeli soldiers and sharpshooters and sneak into Israel, rioters burned thousands of tires that had been deployed at the border. Israeli forces responded by aiming giant fans at the tire fires, keeping most of the acrid smoke on the Gaza side. Israeli planes also doused the flames from the air. Over the past ten days, Israeli forces have eliminated 31 terrorists.

On Friday evening, Israeli soldiers shot at an Arab whom Gaza sources claimed was a journalist. According to Hamas, Yasser Mortaja, a freelance photographer, was wearing a vest clearly marking him as a journalist, but Israeli officials said that he was shot as he operated a drone over soldiers. Speaking Motzoei Shabbos, Defense Minister Avigdor Liberman said that anyone who takes that kind of action should not be surprised at being targeted by Israeli soldiers. “We’ve seen dozens of incidents in which terrorists used ambulances, pretending to be from the Red Crescent medical society, or posed as journalists.

“We are not taking any chances. I think it is clear that the IDF is the most moral army in the world,” the Defense Minister said. “When we look at the entire region, we see half a million killed in Syria, and hundreds of thousands killed in Sudan, Libya and Iraq. No one is concerned about this. It is only when we act out of self defense that everyone suddenly gets concerned. We realize that this is the situation, and it is against this we must remain united.”