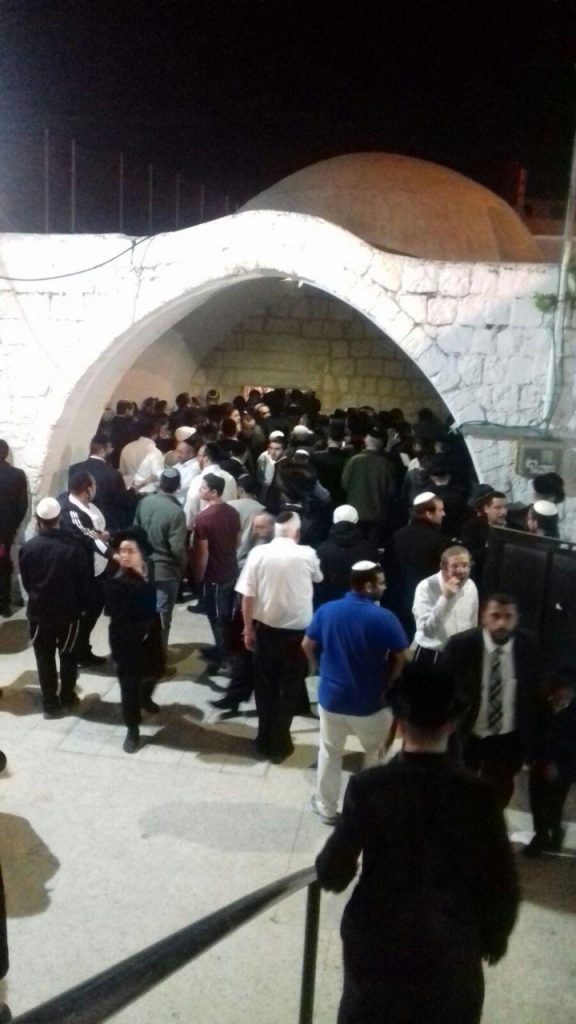 Over 1,500 people came to daven at Kever Yosef Wednesday night in honor of Chol Hamoed Pesach, accompanied security forces who fended off numerous Arab rioters who attempted to reach mispallelim. Arabs threw a firebomb at IDF troops, and soldiers also discovered several armed Arabs who had taken up sharpshooting positions on the roofs of houses. No injuries among civilians or soldiers were reported.

Arabs have vandalized and set fire to Kever Yosef numerous times since the signing of the Oslo Accords, most notably in 2000, 2003, 2008, and 2014. Between 2003 and 2009, the site remained desolate, until Israel and the PA reached an accord on refurbishing the site in 2010. Currently, Jews are allowed to visit Kever Yosef once a month – usually on Erev Rosh Chodesh or during holidays – to daven.

Shomron Council head Yossi Dagan said that “it is moving to see the large numbers of people who come here each time they can – Israelis and visitors from abroad, religious and secular, chareidim and IDF soldiers, all of whom shed tears when they come here. Anyone who comes here feels the kedushah. This is especially true at Pesach, as tens of thousands of people come to visit sites in Yehudah and Shomron. While we are always happy when we can visit, that happiness is tinged with sadness at the lack of a Jewish presence here. Yosef unites all of the Jewish people, and this is what is happening here now.”

Meanwhile in Chevron, over 40,000 Jews had visited the city as of Wednesday, with some 30,000 visiting Me’aras Hamachpelah. Last year, a total of 18,000 people visited the holy site throughout Pesach, Jewish community officials said. Jews were allowed to enter all part of the Me’arah, including the main Ulam Yitzchak section, which is usually closed off to Jews. No security incidents were reported this week.

IDF soldiers overnight Wednesday seized weapons that were to be used in terror attacks. Soldiers, working with police, discovered a cache of weapons in Chevron. Several suspects were arrested and the cache confiscated. In a statement, police said that such weapons were often used in terror attacks, and that security forces were determined to seize all weapons that were being held illegally by all people, in order to better protect all Israelis and residents of Palestinian Authority-controlled areas, who are also under threat by terrorists and criminals.

Overnight Wednesday, security officials said they arrested 8 wanted security suspects in other areas in Yehudah and Shomron. The suspects were wanted for participating in rioting and throwing stones and firebombs that endangered Israeli civilians and IDF soldiers. Several of the suspects were also charged with belonging to Hamas. All were being questioned on their activities by security forces.