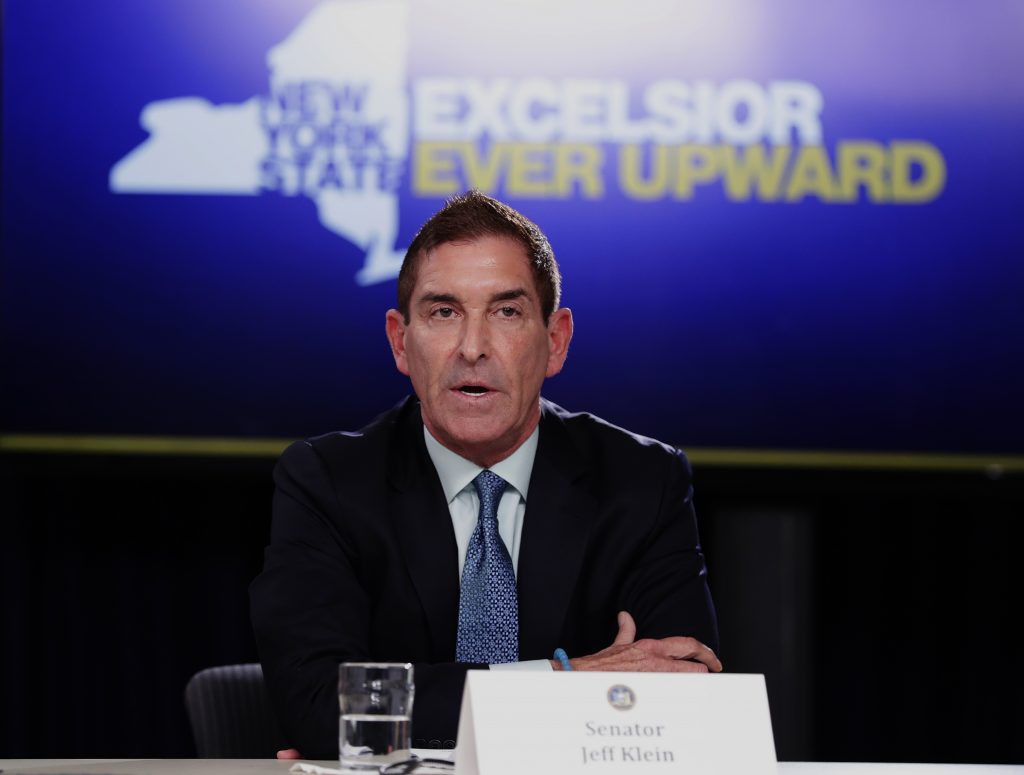 Democrats resolved a longstanding internal rupture in the New York state Senate Wednesday that had empowered Republicans and prevented votes on liberal priorities including gun control and help for immigrants.

Under a deal negotiated by Democratic Gov. Andrew Cuomo, the eight-member faction known as the Independent Democratic Conference will reunite with mainline Democrats. Democratic leader Andrea Stewart-Cousins of Yonkers will lead the combined group, with IDC leader Jeff Klein of the Bronx as deputy leader.

“Today what unites us is more important than what divides us,” Cuomo said at a joint appearance with Stewart-Cousins and Klein in Manhattan.

The agreement ends a seven-year feud between the IDC and mainline Democrats that allowed Republicans to hold on to the Senate, their last bastion in New York state government. It also relieves a big headache for Cuomo, who has been accused by liberals of exploiting the schism for political leverage.

Cynthia Nixon has made Cuomo’s ties to the IDC a major part of her primary challenge to the two-term governor. Members of the IDC, meanwhile, face primary challengers who say the IDC has enabled the party of President Donald Trump.

Cuomo, Klein and Stewart-Cousins said the agreement stems from the need to work together to counter policies coming from Washington Republicans.

A spokesman for Senate Republicans dismissed the reunification as a “desperate attempt to avoid Democratic Party primaries.”

“Let’s be honest — the only reason that any of this is happening now is because Andrew Cuomo is scared to death of Cynthia Nixon,” said spokesman Scott Reif.

Liberal groups said they would continue to support primary challengers against IDC members. Nixon showed no sign of backing off her criticism of Cuomo, either.

“If you’ve set your own house on fire and watched it burn for eight years, finally turning on a hose doesn’t make you a hero,” she said of Cuomo’s role in brokering the agreement.

Republicans will retain control of the Senate at least until April 24, when special Senate elections will fill two vacant Senate seats representing heavily Democratic areas of the Bronx and Westchester County. If Democrats win both seats they’ll have a numeric majority and a chance to take over the Senate for the first time since 2009.

But math is seldom simple in the Senate. There are currently 31 Republicans and 30 Democrats in the Senate, though one of them, Brooklyn Sen. Simcha Felder, supports the Republicans. Felder, who was not a member of the IDC, has not committed to returning to the Democratic fold.

“I don’t care about political parties and more and more New Yorkers feel the same way,” he said Wednesday.

The question mark surrounding Felder has prompted Democrats to look to the fall elections, when they predict opposition to Trump will trickle down to big victories in legislative races.

Democrats already have a big majority in the state Assembly and hold the offices of governor, comptroller and attorney general. Control of the Senate, too, would ease the way for Democratic bills currently blocked by the GOP, including ones to increase firearm restrictions, allow early voting, authorize state financial aid to students who entered the country illegally as children.

“I know that together, certainly with the governor, we will be able to do all of the things that we know are important,” Stewart-Cousins said.

Klein, who wielded tremendous influence in the Senate as IDC leader, said members of his splinter group decided they had to work with mainline Democrats for the good of the state.

“Sometimes you have to take a step back before you take two steps forward,” he said.