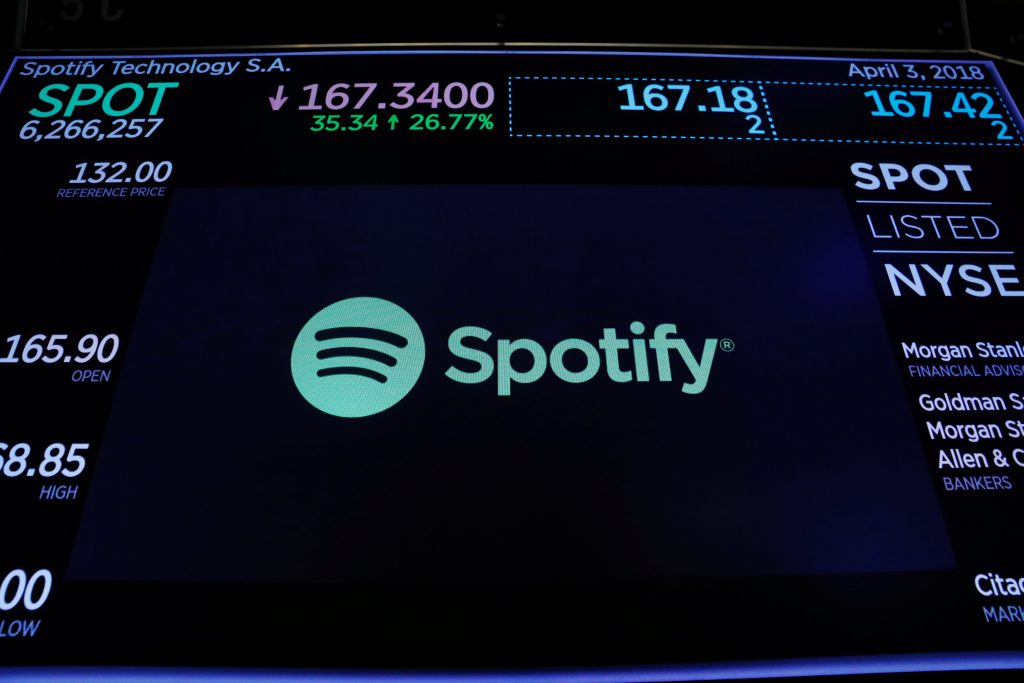 Spotify’s opening act on Wall Street struck a chord with investors betting the unprofitable company’s trend-setting music streaming service will maintain its early lead over Apple and other powerful challengers.

After several hours of anticipation Tuesday morning, Spotify’s shares traded as high as $169 in their stock market debut before falling back slightly. The stock closed at $149.01 — well above its previous high of $132.50 in deals worked out during Spotify’s 12-year history as a privately held company.

The performance left Spotify’s market value among the 10 highest ever recorded by a technology company following their first day of U.S. trading, according to Dealogic. Chinese e-commerce company Alibaba Group holds the top spot at $234 billion after its market debut in 2014.

Spotify CEO Daniel Ek who founded the company, emerged as the day’s biggest winner. His 27 percent stake in the Swedish company is now worth $7.4 billion.

The good vibes surrounding Spotify stem from its early lead in music streaming — a still-evolving field trying to hook people on the idea that it’s better to subscribe for online access to millions of tunes than to buy individual albums and singles.

Spotify has attracted 71 million worldwide subscribers so far and is aiming to increase that number to as many as 96 million subscribers by the end of the year. It has 159 million total users, including people who are willing to listen to ads for access to free music.

Spotify’s success in music streaming has drawn comparisons to Netflix, which built upon its pioneering role in DVD-by-mail rentals and then video streaming to create a hugely successful, subscription-driven franchise that has produced spectacular investment returns and has minted the company with a market value of $122 billion.

A $10,000 investment in Netflix’s 2002 initial public stock offering would now be worth more than $2.6 million, leaving some investors wondering if Spotify might be on a similar trajectory in music streaming.

“The similarities here, we believe, are much greater than the differences,” RBC Capital Markets analyst Mark Mahaney wrote in a recent research note assessing the parallels between Spotify and Netflix.

Besides blending technology with a subscription model to reshape a popular form of entertainment, Spotify and Netflix have a common executive in their lineage. Spotify’s current chief financial officer, Barry McCarthy, held the same job when Netflix went public and remained in that position until leaving the video service in 2010.

Unlike Netflix, Spotify still isn’t profitable, having lost more than 2.4 billion euros ($3 billion) since it started more than a decade ago. After losing 1.2 billion euro, Spotify has also made it clear that it intends to remain focused on adding more subscribers instead of making money for now.

Spotify Technology SA made its Wall Street debut in an unconventional way. It used a “direct listing” on the New York Stock Exchange that allows the company’s early investors and employees to sell as many shares as they want whenever they want. That’s a departure from a traditional initial public offering in which a company and a few select investors first sell a limited amount of stock at a starting price determined by investment bankers who spend weeks gauging investor demand.

The direct listing could result in wild swings in Spotify’s stock pricing during the first few days of trading, especially since Spotify’s shares sold in a range of $48.93 to $132.50 in privately negotiated transactions during the first 11 weeks of this year.

“Normally, companies don’t pursue a direct listing. While I appreciate that this path makes sense for most, Spotify has never been a normal kind of company,” Ek wrote in a blog post .

“Our focus isn’t on the initial splash,” he added. “Instead, we will be working on trying to build, plan, and imagine for the long term.”