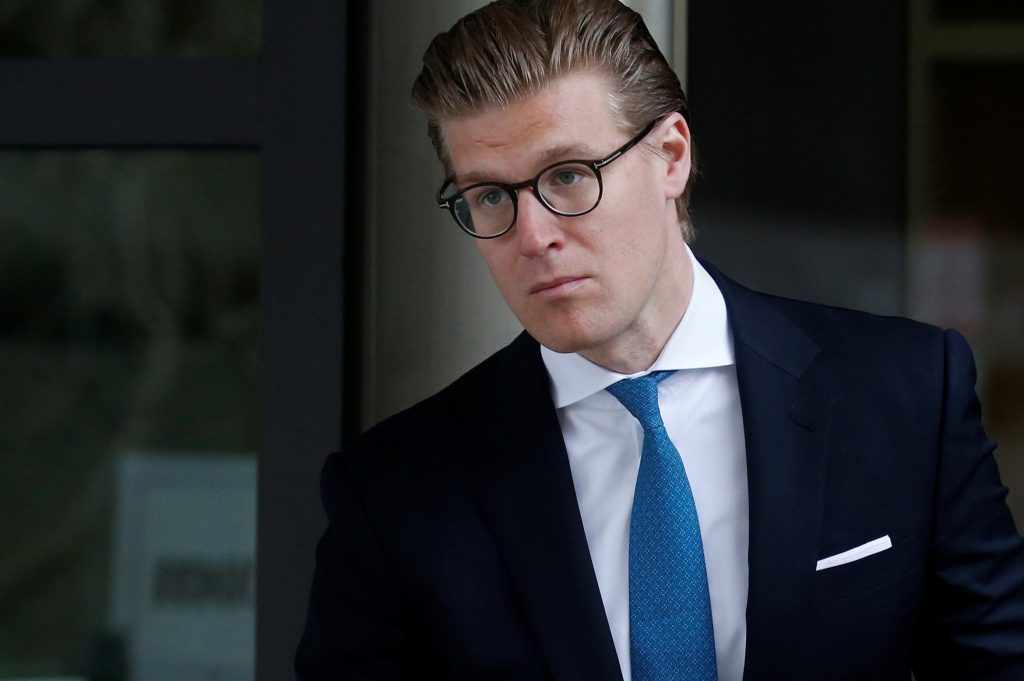 The Dutch son-in-law of one of Russia’s richest men was sentenced on Tuesday to 30 days in prison and fined $20,000 for lying to Special Counsel Robert Mueller’s investigators about contacts with an official in President Donald Trump’s 2016 campaign.

Alex van der Zwaan, a lawyer who once worked closely with Trump’s former campaign chairman Paul Manafort and former deputy chairman Rick Gates, became the first person to be sentenced in Mueller’s ongoing probe, which has hung over Trump’s presidency.

Van der Zwaan, who told the court he was sorry for his actions, also was sentenced to two months of supervised release by U.S. District Court Judge Amy Berman Jackson. He pleaded guilty on Feb. 20 as Mueller intensified his investigation into potential collusion between Trump’s presidential campaign and Russia.

Van der Zwaan’s apology and his lawyer’s explanations for his client’s actions appeared to ring hollow for the judge.

In pleading guilty, van der Zwaan admitted that he withheld and deleted emails, and also that he lied to FBI agents about previous communications with Manafort protege Gates and a person who worked for Manafort in Ukraine identified as “Person A.”

The description of “Person A” in court records matches Konstantin Kilimnik, who worked for Manafort’s consulting firm in Ukraine. Mueller’s office has said “Person A” has maintained ongoing ties to the Russian military intelligence service and had communicated with Gates and van der Zwaan during the 2016 presidential election.

While van der Zwaan does not appear to be a major figure in Mueller’s probe, his sentencing indicates the special counsel will deal sternly with witnesses who lie to his investigators, with serious criminal consequences, as he scrutinizes the conduct of Trump and others.

The judge said van der Zwaan, unlike some defendants who have come before her, possesses the financial and emotional resources to weather difficult times. “This glass was dropped on a very thick carpet and it has cushioned the blow,” Jackson said.

“Your honor, what I did was wrong. I apologize to the court, and I apologize to my wife,” van der Zwaan, who previously worked for the law firm Skadden Arps, Slate, Meagher and Flom, told the judge.

Van der Zwaan’s attorney, William Jay Schwartz, asked Jackson to impose only a fine and allow his client to leave the country, saying he had already been punished enough and should receive credit for returning to the United States to correct the record after lying to Mueller’s investigators.

Since his return in December, Schwartz said, van der Zwaan has been walled up in a residential hotel in Washington and unable to return to London, where his wife is undergoing a difficult first pregnancy.

“He is literally in limbo,” Schwartz said.

Andrew Weissmann, a prosecutor with Mueller’s office, disputed the defense’s characterization of van der Zwaan’s cooperation, saying he returned to the United States after his first interview because he was compelled to do so by a grand jury subpoena.

Van der Zwaan worked closely with Manafort and Gates in 2012, before their involvement in the Trump campaign, when they were serving as political consultants for Ukraine’s former pro-Russia President Viktor Yanukovych on a report about former Ukrainian Prime Minister Yulia Tymoshenko.

Mueller has secured two indictments against Manafort arising from his lobbying for the pro-Russian Ukrainian Party of Regions, with charges ranging from failing to register as a foreign agent and conspiring to launder money, to bank fraud and filing false tax returns. Manafort has pleaded not guilty.

Trump has called Mueller’s investigation a witch hunt and has denied collusion with Moscow.

The judge said she was disappointed van der Zwaan did not write a letter to the court on his own behalf to express remorse, and said it would not deter others if she merely let him “write a check and walk away.”

Jackson urged him not to despair.