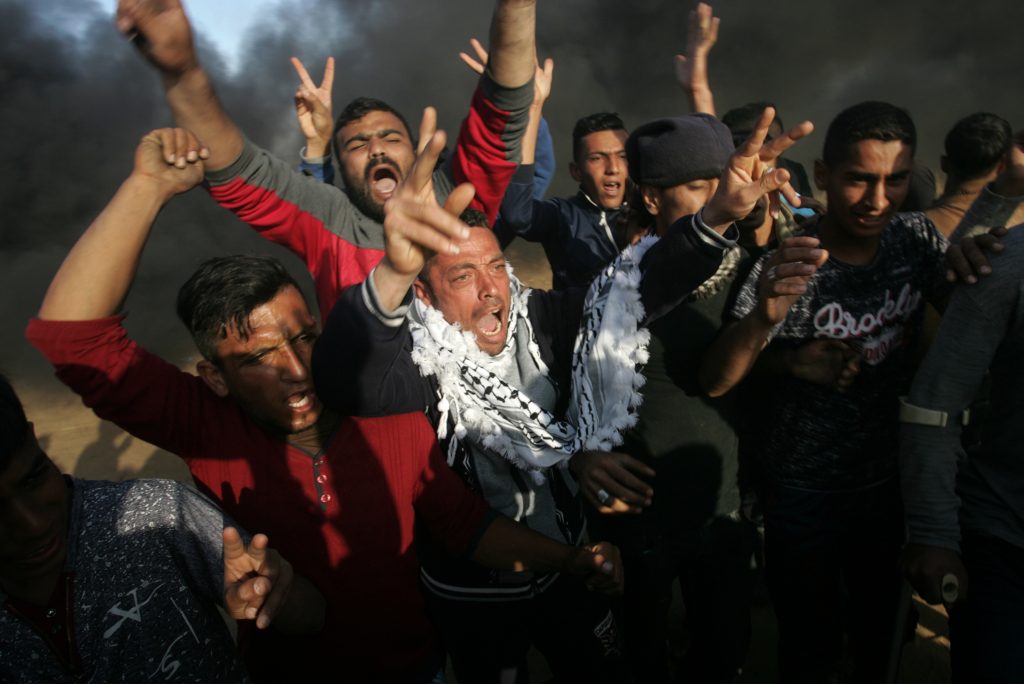 Hamas Gaza top terrorist Yahya Sinwar promised fresh outbreaks of rioting in a mass rally in Gaza on Sunday. “Our unemployed have no work in Gaza but they have found employment on your border, destroying your construction equipment and shooting you point blank,” he told a crowd of thousands in Gaza City. “We are here to say that Hamas does not hide in palaces or in caves, we are with you. Today we begin the march that will not end until we open the border, at the right time. There can be no peace with the enemy and no peace plan will force us to make peace with them.”

Disturbances at the Gaza border fence continued on Shabbos and Sunday, but each day saw smaller crowds of Gaza Arabs rioting and attempting to attack IDF troops after the mass riot on Friday, in which tens of thousands of Arabs massed on the border. 15 Gaza Arabs were killed and hundreds were injured, as IDF troops used a combination of anti-riot measures and live ammunition to distance Arabs from the border and carrying out Hamas’s declared intent to rip the border fence down and enable Gaza Arabs to march on Israeli cities.

The IDF said that all those killed were ringleaders of the rioting, and that despite Hamas provocations – including sending a seven-year-old to the fence, apparently in the hope that Israeli soldiers would shoot and kill her – soldiers did their best to avoid unnecessary bloodshed. In a statement, the IDF said that the border was sacrosanct, and that it “separates a sovereign state and a terrorist organization. It separates a state that protects its citizens from murderers who send their countrymen into danger. The fence separates an army that uses force in self-defense and in a focused and proportionate manner, and Hamas, an organization that sanctifies murder and death, that for years – Friday included – has been intent on harming millions of Israelis.”

Hamas continued to attempt to harm Israel via terrorism as well. On Sunday night, IDF soldiers arrested three Gaza Arabs who had infiltrated Israel by crossing the border fence. They were not found to be carrying weapons, but security officials said that it was likely they were set to meet contacts in Israel that would supply them with weapons in order to carry out a terror attack. Last week, Israeli soldiers captured three different groups of Gaza Arabs – one of them heavily armed, and that had reached 20 kilometers into Israel – that had crossed the border fence.

Israeli security analysts believe that things will get worse before they get better, Hadashot News reported Sunday night. “[Hamas Gaza head] Sanwar has found the formula that works in these mass riots, and there is no reason for him to pull back,” the report quoted the analysts as saying. “We can expect to see an escalation of the situation each week, at least until mid-May,” when Ramadan begins. Security officials also expect increased attempts to carry out terror attacks, and more rocket attacks. The army will remain on high alert at least through the weekend.

Reports Monday said that Israel was holding the body of at least one of the terrorists killed Friday. He was part of a terror cell that conducted a shooting attack against Israeli soldiers, shooting at them from the northern Gaza strip. Israeli forces returned fire and killed several terrorists. Funerals were held Sunday for all the other terrorists killed Friday, and a Gaza source said that the reason no funeral was announced for the 16th terrorist was because Israel was in possession of his body.

Commenting on the actions of the IDF on Friday, Prime Minister Binyamin Netanyahu said that he was “proud of our soldiers who are watching our borders and enabling Israelis to celebrate Pesach in peace. Israel will continue to act with determination to protect its sovereignty and its citizens.”