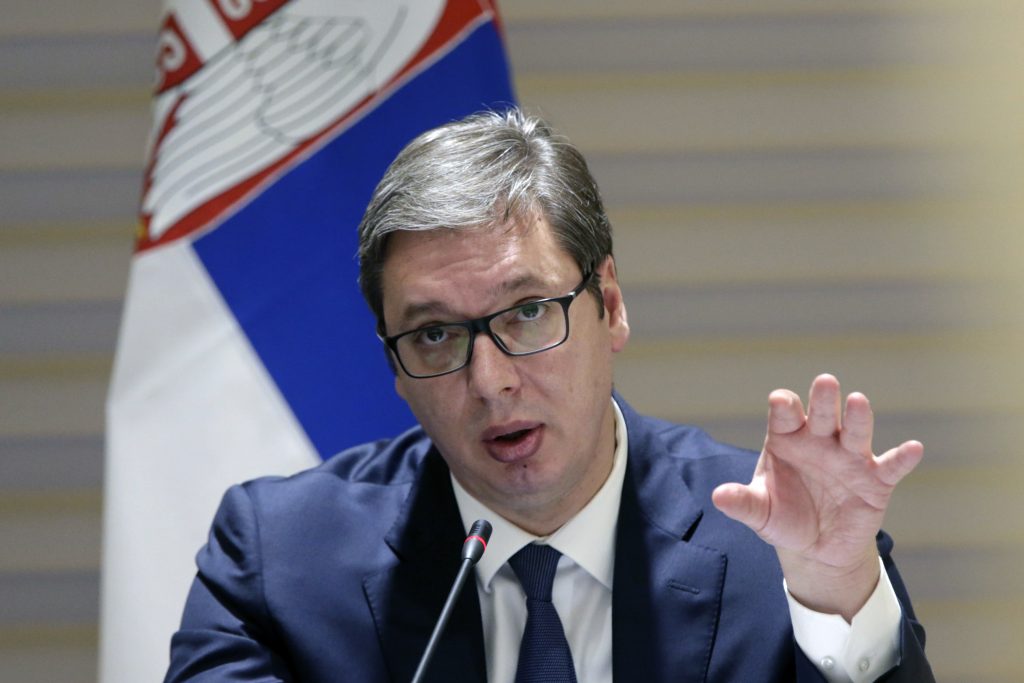 Serbia’s president sought advice from Russian leader Vladimir Putin on how to respond to a spike in tension with Kosovo in a call that threatens to escalate the East-West struggle for influence over the Balkans.

Aleksandar Vucic asked Putin Wednesday how to “confront violence and aggression” by Kosovo officials following Monday’s arrest and expulsion of Marko Djuric, Serbia’s chief negotiator in talks sponsored by the European Union, the Kremlin said. It added that the call was initiated by Vucic after the incident, in which police used tear gas and stun grenades to break up a protest when Djuric entered Kosovo without permission.

The call underscores the approach Vucic has taken as he tries to push Serbia toward EU entry next decade. While he has engaged with the bloc, he’s also kept strong ties with Russia and has refused to acknowledge Kosovo’s declaration of independence in 2008, almost a decade after NATO warplanes forced Serb troops out of Kosovo.

Five years after signing a pact aimed at normalizing ties, which Serbia must do to join the EU, the neighbors are still struggling to make it work, and Vucic has depended on Russia to help block Kosovo’s recognition in international bodies. For its part, Putin’s government is trying to counter the further expansion of the EU into former communist Europe and increase its influence through investment, military support and other means in the Balkans, the site of conflicts in the 1990s that were Europe’s bloodiest since World War II.

“I think we will have every form of support from Russia, and we have agreed to stay in constant contact,” Vucic, who’s a frequent visitor of Putin in Moscow, told Prva TV after the call. He also spoke with Belorussian President Alexander Lukashenko about the incident.

Following the clash Monday, ethnic-Serbs in the Kosovo Cabinet resigned in protest of Djuric’s “humiliating” expulsion. They called for Kosovo Prime Minister Ramush Haradinaj to step down, but he refused. The State Department condemned the events, saying that they “unnecessarily heighten tensions and threaten regional stability.”

“The message of the Russian president is clear,” Nenad Popovic, Serbia’s minister without portfolio, told state TV broadcaster RTS. “It’s aimed also at some representatives of the international community who wish, with pressure, blackmail and conditions, to force Serbia to do something it never will, and that’s to recognize Kosovo.”

Vucic will postpone the announcement of a proposed solution for future ties with Kosovo, which was originally planned for late April or early May, the Belgrade-based Danas newspaper reported, citing sources it didn’t name.

For Serbs, Kosovo remains the cradle of their heritage and many people are still bitter over the 1999 intervention of North Atlantic Treaty Organization troops against Slobodan Milosevic’s repression of the ethnic-Albanian population in the final conflict in the breakup of the former Yugoslavia. Serbian army and police have had no access to Kosovo since then.

More than 80 percent of Serbs would drop the goal of EU membership if it meant accepting Kosovo’s independence, the Tanjug news service reported, citing a survey by the pollster Ninamedia. Almost 45 percent of those polled said that Serbia hadn’t lost Kosovo and 55 percent said no government would recognize Kosovo as independent.

Vucic has morphed from a nationalist politician in the 1990s, when he served as information minister during the war with Kosovo, to one pledging to lead Serbia into the EU. The 28-member bloc has set 2025 as a possible date for entry.