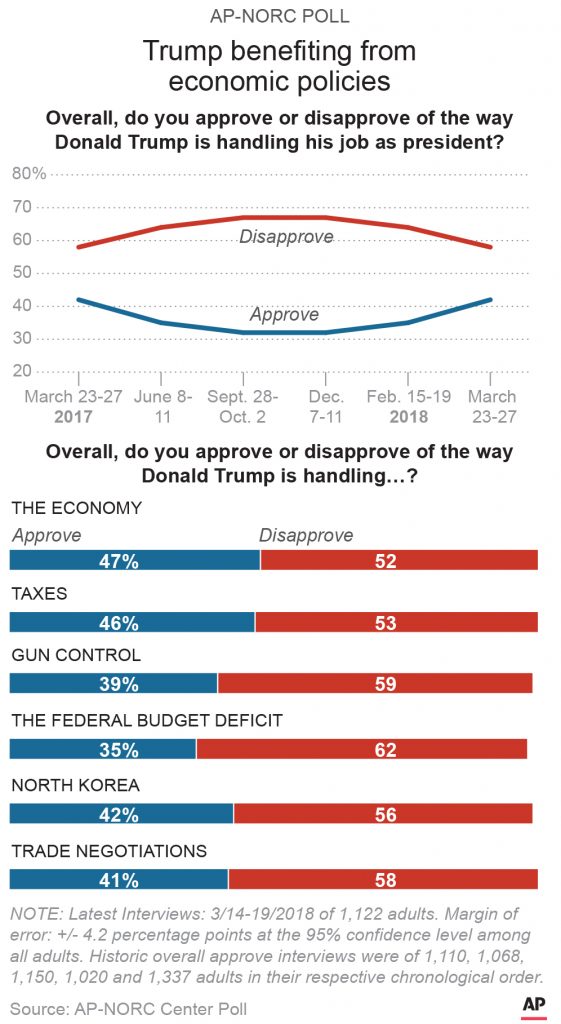 A growing American economy and passage of a Republican tax overhaul appear to be helping President Donald Trump lift his approval ratings, according to a new poll by The Associated Press-NORC Center for Public Affairs Research.

42 percent say they now approve of the job he’s doing as president, up seven points from a month ago. That’s a welcome change in trajectory for a White House that has been battered by chaos, controversies and internal upheaval.

The poll suggests that at least some of the president’s improving standing is tied to the economy, which has steadily grown and added jobs, continuing a trajectory that began under President Barack Obama. Nearly half of Americans surveyed — 47 percent — say they approve of how Pres. Trump is handling the economy, his highest rating on any issue. When it comes to tax policy, 46 percent of Americans back Pres. Trump’s moves.

For Republicans, that offers a glimmer of hope as they stare down a difficult midterm election landscape and a surge of Democratic enthusiasm. With few other legislative victories from Pres. Trump’s first 14 months in office, GOP lawmakers have largely pinned their hopes for keeping control of Congress on middle-class voters feeling the impact of the tax law.

“Our fortunes will rise and fall with the economy and specifically with the middle-class tax cut this fall,” said Corry Bliss, executive director of the Congressional Leadership Fund, a super PAC aligned with House Speaker Paul Ryan. Bliss urged Republican candidates to view the law as “an offensive, not defensive weapon.”

One of the GOP’s challenges, however, will be keeping the economy and tax overhaul in the spotlight through the fall, given the crush of other matters roiling the White House and competing for Americans’ attention. Each week has seemed to bring a new departure among the president’s closest advisers. And many days, Pres. Trump is more inclined to use his Twitter megaphone to try to discredit the investigation into possible campaign contacts with Russia than promote the tax overhaul.

Republican operatives acknowledge that even if they can break through the clutter, they still have ways to go when it comes to explaining the $1.5 trillion tax plan to Americans. Democrats have aggressively cast the measure, which permanently slashes the tax rate for corporations and reduces taxes for the wealthiest Americans, as a boon for the rich that offers comparatively little for the middle class.

The Democratic message does appear to be breaking through with voters. Among those Americans who are familiar with the new law, 77 percent believe it helps large corporations and 73 percent say it benefits the wealthy, while 53 percent say it helps small businesses. Americans are evenly divided on whether the measure helps the middle class.

Republicans argue Democrats risk overreaching by downplaying the impact that even a small windfall from the tax bill can have for a family and individual. According to the AP-NORC poll, nearly half of those who receive a paycheck — 46 percent — say they’ve seen an increase in their take-home pay as a result of the tax law.

Heather Dilios, a 46-year-old social worker from Topsham, Maine, is among them. Dilios, a Republican, estimates she’s now taking home between $100 to $200 more per paycheck as a result of the new tax law. That’s more than she expected when Pres. Trump signed the legislation.

Dilios said it’s more than the dollar amount that’s driving her support for the law.

“It’s more about being able to keep what is rightfully mine rather than giving it to the government,” she said.

Overall, taxes and the economy are the brightest spots for Pres. Trump, who gets lower numbers from voters on a range of other issues, including his handling of North Korea (42 percent), trade (41 percent), gun control (39 percent) and the budget deficit (35 percent).

Pres. Trump has benefited from an increasingly healthy economy that has boosted consumer and business sentiment. The 4.1 percent unemployment rate is the lowest since 2000 without the same kinds of excesses that fueled that era’s tech bubble.

While Pres. Trump attributes the gains to his tax cuts and deregulation efforts, many economists say conditions so far are largely a continuation of the momentum from the gradual expansion that began during the Obama administration.

Pres. Trump’s most recent policy moves have also rattled financial markets and raised questions about the prospect of an economic slowdown. He slapped hefty tariffs on steel and aluminum imports, though his administration has issued waivers to several countries. And last week, he moved to slap $60 billion in tariffs on Chinese goods, prompting Beijing to promise swift retaliation.

The full scope and impact of Pres. Trump’s proposed tariffs won’t be known for some time, but the initial reaction from Americans is decidedly mixed. The AP-NORC poll finds that 38 percent support the steel and aluminum tariffs and 29 percent are opposed.