Feeling Gratitude for All Our Sons 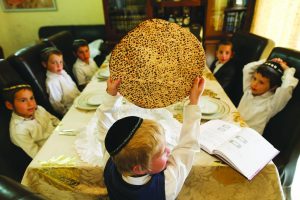 The Pesach Seder is a time of great joy, an opportunity to relive Yetzias Mitzrayim together with family, to tell the story of the origins of our people to the next generation, and to appreciate the benefits and responsibilities of being an am segulah who enjoy a unique relationship with our Creator.

But it’s also a time of pressure, of anxiety. It’s not just the hard work that goes into the cooking and preparations, but the tension that sometimes comes with bringing together a large and disparate family. It’s the one time of the year when everyone is together, including the son who has gone in a spiritual direction we don’t approve of, to discuss core issues of faith — the very ones he has difficulty with.

Most awkward is the moment in the Haggadah when we speak of the four sons. How do we address the elephant in the room? The words mah ha’avodah hazos lachem — what is this work/service to you? — could come straight out of his mouth, and in fact have, on many occasions.

While we can’t control what he’s thinking, or how he’ll react to the messages and meaning of the evening, we can control our attitude towards him. He isn’t a burden, he isn’t a source of shame. He’s a gift from Hashem, for which we must be profoundly grateful.

In introducing the Four Sons, the Haggadah says four times “baruch” — baruch haMakom, baruch Hu, baruch sheNasan Torah l’amo Yisrael, baruch Hu. The commentaries explain that we are blessing and thanking Hashem for each and every one of the four sons, including the rasha.

In Shemos (12:26-27), Moshe informs the Elders that the Jewish People will celebrate Pesach when they come to Eretz Yisrael. “And it will be when your sons say to you, ‘What is this work to you?’ and you will say, ‘It is a paschal sacrifice to Hashem, Who skipped over the homes of the Bnei Yisrael in Egypt …’ And the people kneeled and bowed down.”

Rashi explains that the Jewish people responded to the good news by expressing thanks to Hashem, specifically for three things: the geulah from Egypt, the arrival in Eretz Yisrael and the privilege of having sons.

But wait a minute. Which son is described here? He’s the one who says, “What is this work to you?” Why is it good news to have a rasha for a son, such that it warrants bowing down in gratitude?

Harav Reuven Margulies, in his commentary to the Haggadah, asks the question and shares the following insight: He says that even sons who belong to the category of rasha will never be totally estranged from Am Yisrael. Our gratitude is for the Divine promise that our children will have kedushas Yisrael forever.

In other words, what we see in the rasha today is not necessarily what we’ll see tomorrow. And the change, just like the geulah from Egypt, can come k’heref ayin, in the blink of an eye.

But accepting these sons as people doesn’t mean coming to terms with the situation. We have to daven for them, not because of our discomfort or feelings of shame, but because as parents we want good for our children, in this world and the next.

There is nothing more painful than the knowledge that our children are being denied the richness of a Torah-true life, the opportunity to achieve shleimus and all the rewards that brings.

That concern for them and their future has to motivate our tefillos. And if these children are not in our tefillos, it means that we either don’t care enough about them or we don’t appreciate what they’re losing out on.

The night of the Seder is the ideal time to offer a tefillah for those who are in need of spiritual redemption. It’s called a leil shimurim, in the plural. Says the Rashbam, “From the time of Avraham, Hakadosh Baruch Hu waited in anticipation for this night, to take Bnei Yisrael out of Egypt as He promised. And for Bnei Yisrael it is a night of anticipation for all future generations, when we yearn to be able to celebrate Pesach in all its detail.”

The message of Pesach is that Hashem is involved in every aspect of our lives, that nothing is impossible — not even taking an entire people out of Egypt — and that redemption can happen in the blink of an eye, for all of us in need of redemption.

May it be a chag kasher v’same’ach for all Am Yisrael, during which we celebrate the ultimate Redemption, speedily in our days.