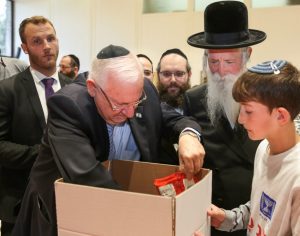 He was a “good Jerusalem boy.” Blue eyes gazing at the horizon and at the walls that surrounded Meah Shearim. In those days, 70 years ago, the Jerusalem neighborhoods were in terrible distress. His father was the head of a yeshivah in Lod who left home Motzoei Shabbos and returned on Thursday, and his mother was a housewife who raised 10 children in a tiny apartment.

Every morning when Itcha David went to the Etz Chaim Cheder in Machaneh Yehudah, he and his classmates would look with longing eyes at the Arab who sold pitas and bagels, and at the wagons carrying tomatoes and watermelons. These were royal delicacies that did not exist in their homes, and they could only dream of them.

Nevertheless, their home was open l’chol dichfin — open to all. There were hungry children in the neighborhood who knew that Itcha David’s mother would give something tasty to anyone who visited their home and studied a chapter of Mishnah with her son. The “something tasty” was a sugar cube, or a slice of bread with a little jelly, or sometimes half an egg or a spoonful of soft cheese.

Little Itcha David, who today is the great Gaon, Harav Yitzchak Dovid Grossman, shlita, the Rabbi of Migdal Ha’emek and president of the Migdal Or institutions, looked with pained eyes at the children who did not have bread, and he had a dream: when he grew up he would make sure no child went hungry.

Tzachi and Rami, Moishie and Yankie, Sergei and Andrei stand in lines, regular soldiers, and pack baskets for the holiday for those who have nothing. Wine, oil, matzos — and much joy. Encouragement. Hope. Everything that a hungry child needs.

Sirkin Camp was built by the British Mandate authorities in 1941 as part of the British army precinct. The base was used by the British Royal Air Force until they left the country in May 1948 and was called “RAF Petah Tiqva.”

For many years the place was an Israeli air force camp — used for studies, combat and training. In the large areas surrounding the camp, exercises were carried out that, with the help of G-d, saved Israel in its wars. But suddenly it was emptied of its residents and soldiers and became a closed area.

Twice a year the place comes to life, and from a desolate site becomes a gate of hope for many families in Israel. Rav Grossman, with his big heart, takes the Sirkin Camp and turns it into a huge facility that distributes, gives and provides. He takes the poorest families in Israel and rehabilitates them.

These are the best homes, and the best families. People are accustomed to call this chalukkah — distribution — but Rav Grossman disagrees: “They give. They give themselves all their lives for their families. They work day and night, and nevertheless they don’t manage to earn a living. It’s very hard to support a household today. We have to help them.”

The poor are helpless in the face of the welfare criteria, and the charitable organizations collapse under the weight of applicants. Families weep. They hope to reach the holiday with wine, matzos, meat and fish, nothing more. But this too is more than they can afford. Their debts to the bank have grown. The ATM swallows up their credit cards. There is no spare money, not even for elementary needs.

Rav Grossman does much for youth in Israel, for their education in institutions and their absorption in Israel, and at the same time he says: “If there is no flour, there is no Torah.” He explains, “When you give food to a family, you can ask them to look after their children and put them into an educational framework. When there is no food at home — the children lapse, G-d forbid, to crime and to the streets. Therefore, it is so important to bring them food to their homes.”

I wander between the camp’s buildings and see the families glowing with joy. Someone looks at them, someone worries about them, someone cares for them. That someone is a great Rabbi, a great general, who for many years has done everything for hungry children.

It is no longer a dream. It is a way of life.