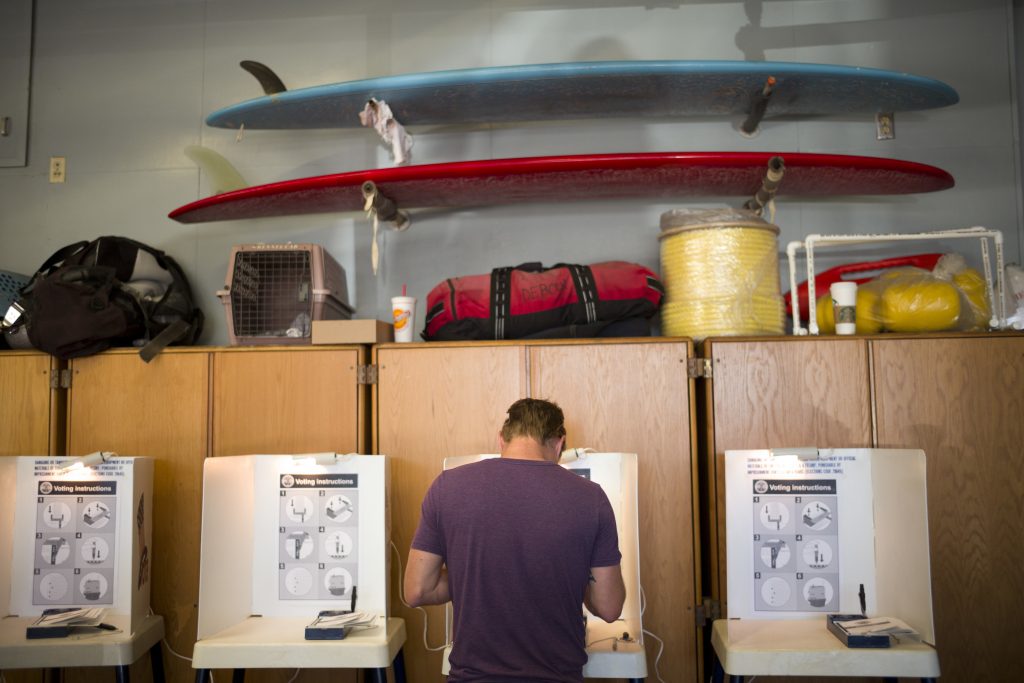 It’s a winner-take-all system used by 48 states that critics hope to have ultimately ruled unconstitutional.

Advocates took their first step last month by filing federal lawsuits in four states — Massachusetts, Texas, California and South Carolina — arguing that the practice of assigning all of a state’s Electoral College votes to the popular winner, no matter how narrow, runs counter to the principle of “one person, one vote” by disenfranchising those who voted for the losing candidate.

The group behind the initiative, the League of United Latin American Citizens, said the practice also violates the constitutional rights of free association, political expression and equal protection under the law.

Luis Vera, an attorney for the group, pointed to the Texas election, arguing that those who backed Clinton essentially saw their votes disappear.

“When that vote actually gets to the Electoral College, it’s just thrown away. It’s counted simply to be thrown away,” he said. “In California, it was the opposite.”

Vera said the group deliberately chose two Democratic-leaning states and two Republican-leaning states — Clinton won about 61 percent of the vote in Massachusetts, while Trump won about 55 percent in South Carolina — to argue that the winner-take-all system harms voters of both parties.

They also drafted local residents to serve as plaintiffs. In Massachusetts, the group tapped former Republican Gov. William Weld, who made a cameo appearance in the 2016 election as vice presidential candidate for the Libertarian Party.

Their goal is to get the question eventually before the U.S. Supreme Court — a long, uncertain road with no guarantee that the high court would even agree to hear the case, let alone rule in their favor.

The group is hoping to pressure states to adopt a more proportional distribution of Electoral College votes.

If the proportional system of naming electors to the Electoral College had been in place during the 2016 election, Vera said, Clinton — who won the national popular vote by nearly 2.9 million votes — would have been elected president. But he was quick to add that the goal of the initiative is not to benefit one party over another.

The group is already getting pushback, including from William Galvin, who as the Massachusetts secretary of the commonwealth oversees state elections.

Galvin, a Democrat, said he suspected the push might be an effort by Republicans to help rig the Electoral College in 2020 for Pres. Trump.

“This should be the subject of a national discussion, not a lawsuit,” said Galvin, who is named in the lawsuit filed in Massachusetts. “No one has thought through the implications. No one’s done a statistical study.”

Galvin also said that while there is a predictability to the winner-take-all method, there is less clarity in trying to dole out electoral votes based on the margin of each candidate’s vote total in each state.

“When you start talking about what percentage did you win Ohio by, then you’re raising questions,” he said. “This is clearly a mathematical game.”

The lawsuit isn’t the first to try to work around the Electoral College.

The National Popular Vote initiative is hoping to persuade enough states to pass laws assigning all of their electoral votes to the winner of the national popular vote. The strategy would kick in when states with enough electoral college votes to put a candidate in the White House join.

Backers of both efforts say they want to ensure presidential candidates see opportunities to pick up votes in every state.

That could mean that residents of Massachusetts, which hasn’t voted for a Republican president since Ronald Reagan and is largely ignored on the campaign trail, could see more campaign rallies at home instead of having to travel over the state line into New Hampshire, site of the first-in-the-nation primary.