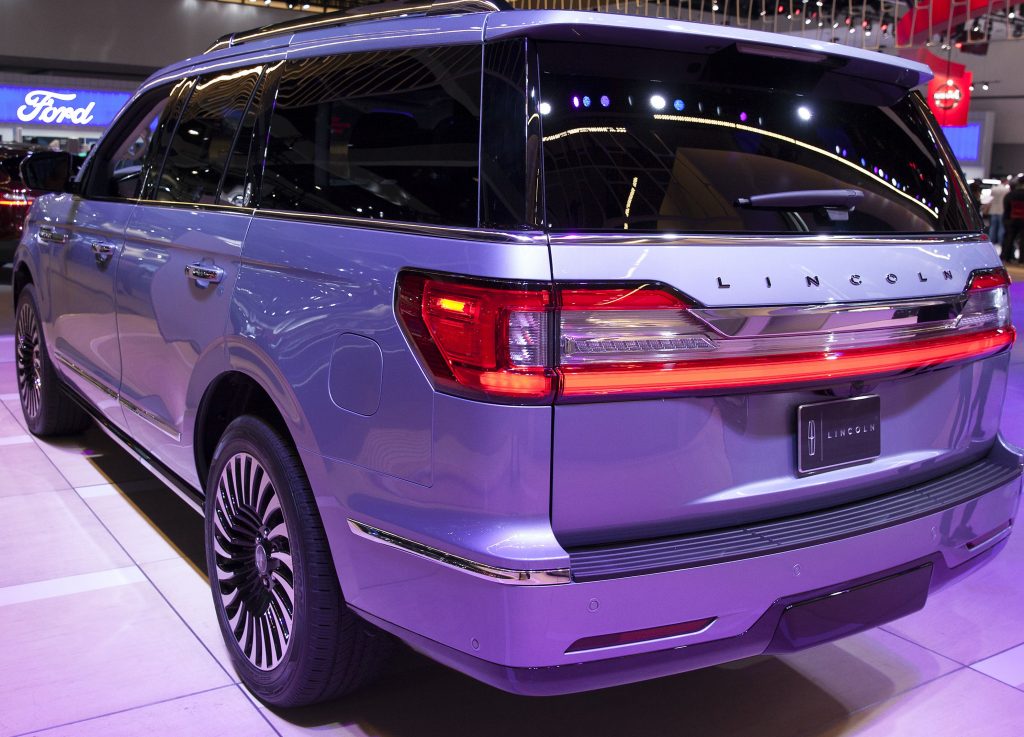 Just two years after Ford bet the revival of its Lincoln luxury line on the return of the Continental sedan, it’s reversing course and going all in on sport utility vehicles instead.

The Continental didn’t sell as expected. Sales are down 30 percent this year, as buyers spurn traditional cars for spacious SUVs. By contrast, the new Lincoln Navigator, a brash behemoth that can top $100,000, flies off dealer lots in less than a week.

So new Chief Executive Officer Jim Hackett now has Lincoln seeking salvation in high-profit SUVs, starting with the introduction of the Aviator model at the New York auto show on Wednesday. Another new Lincoln SUV is coming by 2020, the company says. Forecaster LMC Automotive predicts Lincoln’s cars will dwindle to just 7.8 percent of its U.S. sales by 2021, signaling a possible end of the road for the Continental and Lincoln’s other slow selling sedan, the MKZ.

Lincoln’s new leader, Joy Falotico, says the brand has little choice but to follow the trends after U.S. sales flatlined in 2017. SUVs surged to 56 percent of luxury auto sales in the U.S. last year, up 10 points from just two years earlier.

“That’s a pretty commanding percentage,” Falotico said in an interview. “And we see forecasts that by 2025, that’s going to be 66 percent. That’s where the heart of the market is going.”

It’s also where Lincoln has the most “traction with customers,” Jim Farley, Ford’s president of global markets, said in an interview. So what does that mean for the fate of Lincoln’s flagging flagship, the Continental?

“I’m not going to comment on that right now,” Farley said. “We have two new utilities coming in the next couple years and we’re going to learn a lot through those launches. You know, we’re always adjusting our product lineup.”

Ford showed dealers a sneak peak of updates coming to the Continental aimed at reviving sales during the National Automobile Dealers Association annual convention last weekend in Las Vegas. Changes include rear-hinged “suicide” doors that evoke the 1961 Continental, which became known as the Kennedy Lincoln because it was favored by the 35th president.

Ford is not alone in discovering luxury buyers are flocking to SUVs even faster than the mainstream market. Cadillac is introducing its XT4 compact SUV this week in New York and Lexus wowed crowds at the Detroit show with its LF-1 Limitless crossover concept. Lincoln, which ranks eighth in U.S. luxury sales, also is playing catch-up to brands like Mercedes, BMW and Audi.

“You’ve got very strong SUV lineups from the leaders in the luxury market and they’re certainly not going to go down without a fight,” Schuster said.

After a decade of searching for an identity and spending billions, Lincoln is finally finding itself in the SUV space, Farley said. The success of the new Navigator recalls how dominant the original model was, driving Lincoln to the top of the luxury sales charts in America in 1998.

Ford squandered that moment by letting 15 years pass before it redesigned the Navigator, and it’s spent much of recent history known as the black car that business travelers take to the airport.

With the arrival of the Aviator, expected to be a three-row, mid-sized model, Farley said Lincoln is finally getting its swagger back. And it’s hoping its expanding SUV lineup will attract moneyed millennials forming families, thereby lowering the average age of Lincoln buyers, which now stands at 60 — eight years above the average for the luxury car market.

“You’re going to see a more opinionated Lincoln,” Farley said. “It’s just a confidence we feel that we have found our place.”

Increasingly, that place is China, where Ford expects Lincoln will eventually sell more models than in the U.S. The Chinese seem to love brash American style more than Americans and have been snapping up Cadillacs and Lincolns, which saw sales soar 66 percent there last year. Ford, which introduced Lincoln in the country three years ago, is rapidly rolling out high-touch dealerships and expects to have 125 there by year’s end.

The well-wheeled in China are just as wild about SUVs, with the big rigs accounting for almost half of luxury auto sales there last year. Strict new air pollution regulations are requiring Chinese consumers to buy more battery-powered vehicles, which explains why Lincoln is planning electric or plug-in hybrid versions of its expanding SUV lineup.

“There certainly is a growth opportunity for Lincoln in China,” Schuster said, “if they can establish themselves as an American brand that’s desired and a status symbol, like Buick is there.”

He’s less optimistic about Lincoln’s plan to grow in the U.S. by luring millennials.

“Lincoln is a niche player and I don’t really expect that to change,” Schuster said. “In fact, when they exit cars, their share will go down.”

But with profit margins that analysts say can top $20,000 on a Navigator, Ford shows no signs of giving up the fight with Lincoln. In the global auto industry, luxury vehicles account for about 10 percent of sales worldwide but about 30 percent of profits, analysts estimate.

“It’s very attractive for any auto manufacturer to play in that profit pool,” Falotico said.