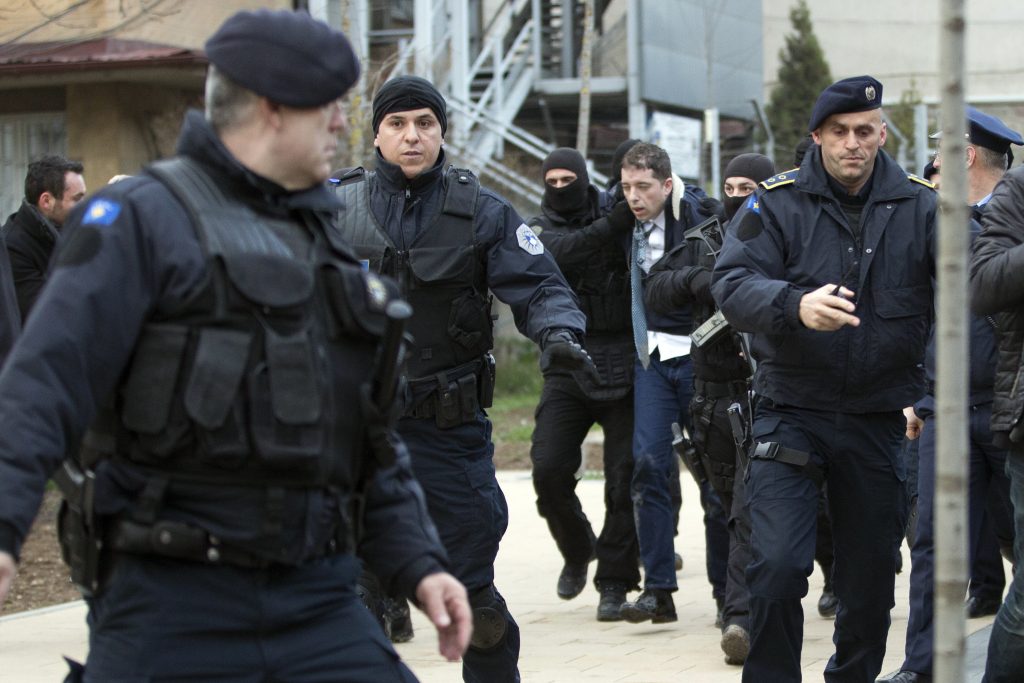 Kosovo police arrested a Serb official after he was banned from visiting a divided town in northern Kosovo and then fired tear gas and stun grenades at Serb protesters Monday, Serbian state media reported.

It was a move likely to inflame tensions between the two foes, which fought a brutal war in 1999. Serbia’s government quickly announced that the country’s state security council would hold an emergency meeting in the evening.

Video footage showed Kosovo policemen in black uniforms with machine guns and body armor leading a handcuffed man from inside a building toward an armored car. Video also showed a conference room inside the building in northern Mitrovica with chairs and tables upended.

Serbia state media said that Marko Djuric, the chief Serb negotiator in European Union-led talks between Serbia and Kosovo, was arrested. The action triggered protests and Kosovo police responded by firing tear gas and stun grenades, the report said. Serbian TV said its cameraman was injured and his equipment was destroyed during the incident.

Djuric was later taken out of a police van under tight security in downtown Pristina, Kosovo’s capital.

“The brutal police action is surprising. Maybe they want to provoke a Serbian reaction,” said Milovan Drecun, a ruling Serbian party lawmaker in the parliament.

Friction between Serbia and Kosovo has increased recently as the EU presses for a compromise between the two foes on a number of issues. Kosovo declared independence from Serbia in 2008, but Belgrade doesn’t recognize the split and is seeking to maintain influence in Kosovo’s north, where most of the country’s Serb minority is located.

Before the reported arrest of the Serb official, Kosovo police had sent reinforcements to stop four senior Serb government officials from visiting Kosovo’s north. But two of them arrived in the Serb-part of the divided town of Mitrovica later Monday.

Serb officials earlier said they would hold the visit despite the decision by Kosovo authorities to prohibit their entry. Serb officials must seek official clearance from Kosovo’s authorities before any visit.

Kosovo Foreign Minister Behgjet Pacolli had warned on his social media that none of the senior Serb officials had permission to enter Kosovo.

“Whoever enters Kosovo illegally will get arrested!” he wrote.

Kosovo police said that the increased forces in the north are only “implementing the government’s decision and have no other goals.”

Serbia’s culture minister, Vladan Vukosavljevic, said he was stopped just before noon at a border crossing between Serbia and Kosovo, according to the Tanjug news agency. He told the agency the move by the Kosovo authorities was “senseless and wrong.”

Kosovo police said Vukosavljevic had been allowed to enter Kosovo’s territory, but then didn’t continue, “deciding by himself to turn back to Serbia.”

“This decision presents a … huge setback and it does not contribute to the overall situation,” Vukosavljevic said.

It was not the first tense moment on Kosovo’s border with Serbia, which is controlled by NATO-led troops since an intervention in 1999 to stop a bloody Serbian crackdown against ethnic Albanian separatists in Kosovo. In January 2017, a Serb promotional train ride, which would have been the first from Belgrade to Kosovo’s northern town of Mitrovica since the 1998-99 war, was turned back by Kosovo authorities.

Last week, EU foreign policy chief Federica Mogherini invited Vucic and his Kosovo counterpart, Hashim Thaci, to a meeting in Brussels to discuss “the preparations of a comprehensive agreement on normalization of relations” and progress in the implementation of past agreements.