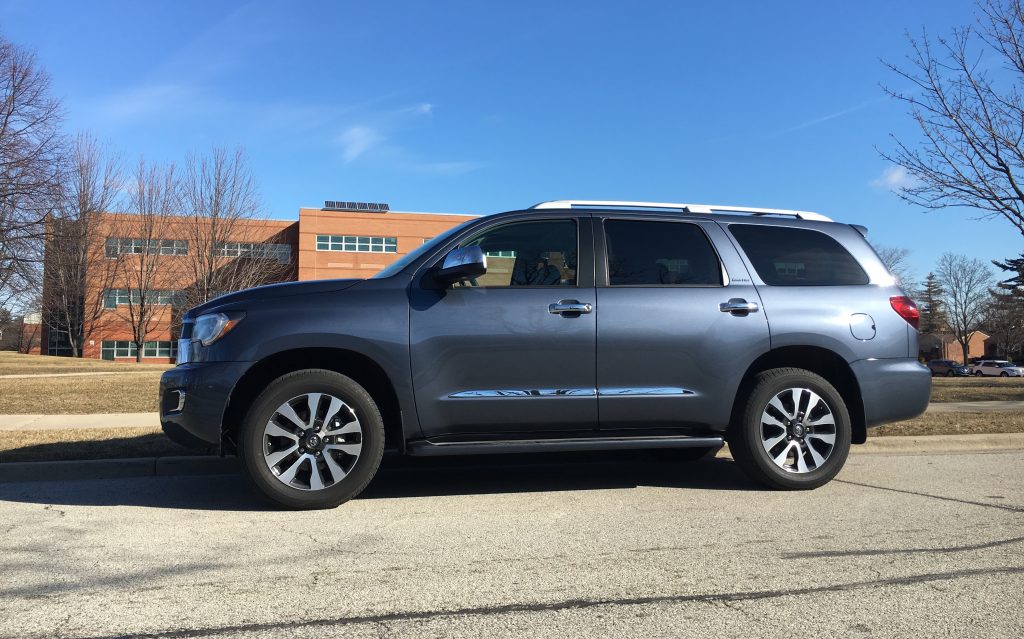 Toyota’s full-size three-row SUV rumbles on, same as it was a decade ago, with technology upgraded for the modern era that has the look and feel of something from the prior era. Such is Toyota.

Even though sales of the Sequoia are a fraction of what they were in its heyday in the early half of the millennium, demand remains constant for the Tundra-based SUV.

That old-school feel is welcome by a certain set dissuaded by all the doodads that turn the modern cabin into a carnival. No start/stop push-button on/off switches here: you get a stiff and unbending key, so you can stab your thigh or waist whenever you sit down. And the gear stick is in the console, notched and sturdy. And of course there is a CD player.

Crank that 5.7-liter V-8 engine and hear that fan roar over anyone talking. And that 11 mpg around town? Could be worse, could be the 1970s.

I get why consumers would opt for a stripped-down family hauler that acts as reliably as a truck. This is a long-haul ride, over space and time, at a reasonable price. And the piecemeal comfort and convenience options that abound in the competitors can feel like a whole lot of snake oil salesmanship. I get it.

What bothers me is how the new stuff is swapped for the old stuff without regard to form or function. What bothers me is the touch screen. The postcard-sized interface is smaller than the console cup holders, and the Entune infotainment system is still one of the worst on the market. Despite having large knobs for climate control and huge buttons on the steering wheel that can’t be misapplied even with work gloves on, there are these tiny buttons that a bare pinky pad can’t hit with any accuracy to get all the secondary vehicle info on the touch screen. And there is still no Apple CarPlay or Android Auto. Two of the five 12-volt outlets are up front, but USB ports are extra. And this is on the middle of the pack, leather-appointed Limited trim.

The cabin is loaded with hard plastic and free of any fancy flourishes, which also has a certain appeal to the truck-should-be-a-truck purists. Accessing the third row takes a strong kid or help from an adult, but getting out is easy. The third row can recline, and the second row bench seat enables eight total passengers.

A power liftgate with sliding window and power folding third-row seats make it easy to lug stuff other than people. Second row folds flat as well, for a flat floor cargo area. The 120 cubic feet of cargo volume — a foot shy of the class-leading Chevrolet Suburban — is above average for the class.

Under the hood is the same fuel-snarfing 381-horsepower V-8 engine. We averaged 13.6 mpg at 45 mph on our highway commutes, a far cry from the EPA-estimated 17 mpg highway. Around town, we were at a solid 11 mpg, also well short of the EPA-estimated 13 mpg city. Is it irony to name it for an endangered tree?

The old power train with the six-speed transmission is proven reliable in the Sequoia, Tundra and Land Cruiser, and feels like it will run without fault for another decade or three. The 401 pound-feet of torque enables towing up to 7,400 pounds, a capability shared by several midsize SUVs but exceeded by all other full-size SUVs.

Most of the upgrades for the decade-old refresh are standard advanced driver assistance systems, such as pedestrian detection and adaptive cruise control that can be used to a stop. There’s a 4.2-inch instrument cluster display to toggle through very basic info, such as changing radio stations with the steering wheel controls. Anything more sophisticated, including checking fuel economy for one trip, involves the terribly tiny touch screen.

The standard safety features are nice, but not worth the upcharge over a lightly used old model Sequoia, if old is your thing.