Technology Apple Is About to Become the Biggest R&D Spender in the World
Health, Science & Technology 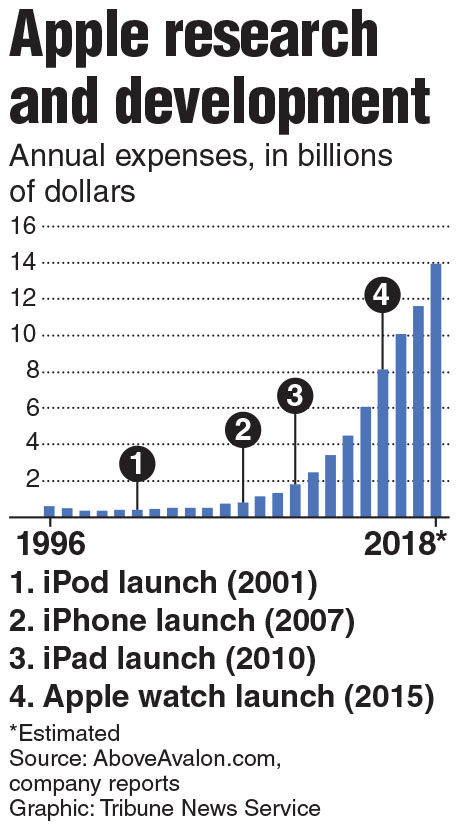 Critics of Apple used to point to its $250 billion-plus mountain of cash, much of it held overseas, and its relatively puny research and development budget and say, “Get spending!” The era of parsimony is over. After the GOP tax cut, Apple said it will be repatriating hundreds of billions of dollars, paying up to $38 billion in taxes on it, over the coming years.

Now it’s taking care of its R&D shortfall, in a big way. In 2016, Apple spent $10 billion on R&D, which ranked it ninth among the world’s top spenders, behind companies like Amazon, Samsung, Alphabet, Intel and Microsoft. That worked out to 5 percent of revenue, up from low single digits for a decade. Top spenders usually allocate anywhere between 8 percent and 22 percent of revenue to R&D.

But based on its current trajectory, Apple has a good shot at becoming the largest R&D spender in the world in the next few years, according to Apple watcher Neil Cybart at Above Avalon. He estimates that Apple will spend more in the current quarter than it has in any previous quarter, and will hit $14 billion in fiscal 2018, twice what it spent four years ago.

The focus of its innovation budget is on controlling more of the hardware of its widening product lineup. Apple already does much of its core microprocessor design work in-house, and is now reportedly ramping up its own MicroLED display development. MicroLEDs are brighter and more energy efficient than current OLED displays, which is a big plus for its watches and other wearable devices to come, like smart glasses. Other big bets include streaming services and content development.

Ordinarily, rapid increases in R&D spending can be a yellow light that a company is losing focus. Cybart doesn’t think the idea bank is running dry. “Apple R&D reflects a company doubling down on its long-term vision. Apple wants to control more of the user experience found with its products.”