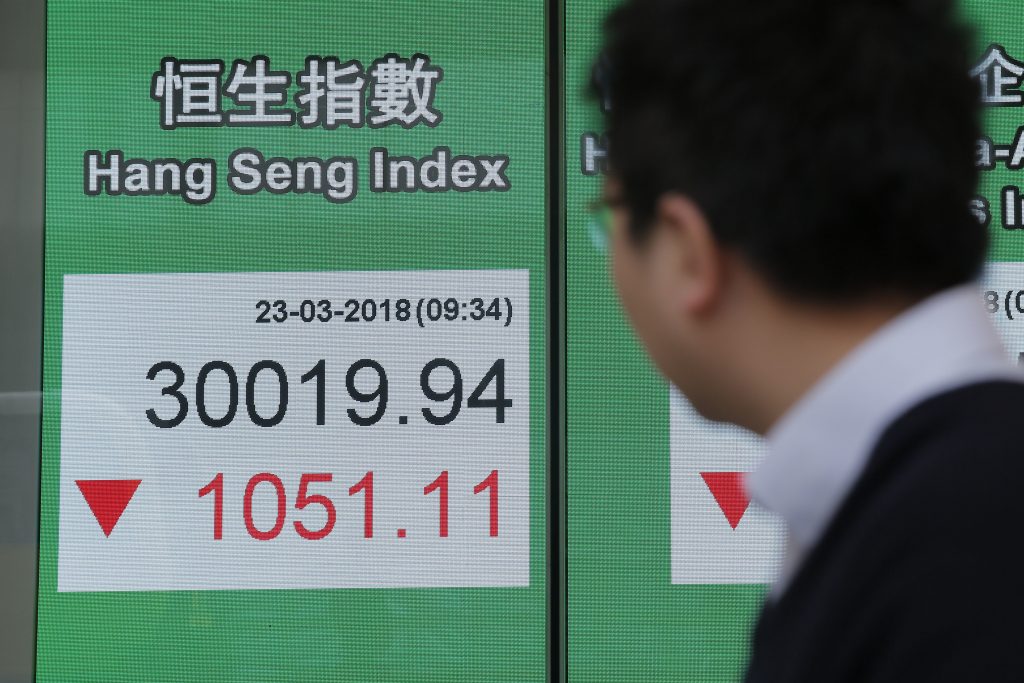 The rumblings of a global trade war shook stock and currency markets on Friday after President Donald Trump announced long-promised tariffs on Chinese goods and Beijing pledged to fight any such war to the end.

S&P futures were down 0.6 percent, suggesting a weaker open on Wall Street later in the day.

Trump signed a presidential memorandum on Thursday that could impose tariffs on up to $60 billion of imports from China, although they have a 30-day consultation period, raising the chance that final measures could be watered down.

Investors fear that the U.S. measures could escalate into a trade war, with potentially dire consequences for the global economy. Beijing urged the United States on Friday to “pull back from the brink.”

“China doesn’t hope to be in a trade war, but is not afraid of engaging in one,” the Chinese Commerce Ministry said in a statement.

China unveiled its own plans on Friday to impose tariffs on up to $3 billion of U.S. imports in retaliation against U.S. tariffs on Chinese steel and aluminium products.

MSCI’s broadest index of Asia-Pacific shares outside Japan fell 2.5 percent as stocks across the region dropped. For the week, the index recoiled over 4 percent.

Shanghai shares were down 3.8 percent.

“The economic impact on both China and the U.S. will be determined by what form the tariffs end up taking. The effects are likely to be felt more strongly in the U.S. and will increase both consumer and producer prices,” wrote Hannah Anderson, global market strategist at J.P. Morgan Asset Management.

“The equity market will bear the brunt of the market reaction. Most impacted will be the U.S., Korea, and Taiwan as companies domiciled in these markets make up a significant portion of the global production chain of Chinese exports.”

“A possible trade war between the United States and China is especially serious for the South Korean economy as it could directly or indirectly affect the country’s trade with them as well,” said Se Sang-young, an analyst at Kiwoom Securities.

Setting a downbeat tone for Asia, the Dow on Thursday shed 2.9 percent, the S&P 500 dropped 2.5 percent and the Nasdaq fell 2.4 percent.

As equities took a beating, the yen, often sought in times of market turmoil, rallied against the dollar.

The greenback fell roughly 0.5 percent to as low as 104.635 yen, its weakest since November 2016. The dollar was down more than 1 percent on the week.

“In the longer run, protectionist policies touted by the United States could be watered down, in turn limiting the negative effect on trade and the global economy,” said Masafumi Yamamoto, chief forex strategist at Mizuho Securities in Tokyo, referring to the U.S. decision to exempt some countries from steel and aluminium tariffs.

“But until the United States makes such concessions, global stocks will be under pressure and the yen will appreciate, especially if China decides to confront the U.S. measures.”

The dollar index against a basket of six major currencies slipped 0.3 percent to 89.615. It has lost roughly 0.7 percent this week, weighed down by a steady decline in U.S. Treasury yields.

The yield fell further on Friday to 2.792 percent, its lowest in six weeks.

In commodities, oil prices recouped overnight losses after Saudi Arabia said that OPEC and Russian-led production curbs introduced in 2017 will need to be extended into 2019.

Other commodities did not fare as well amid the trade war fears, with copper on the London Metal Exchange falling to a three-month low of $6,628.00 per ton.