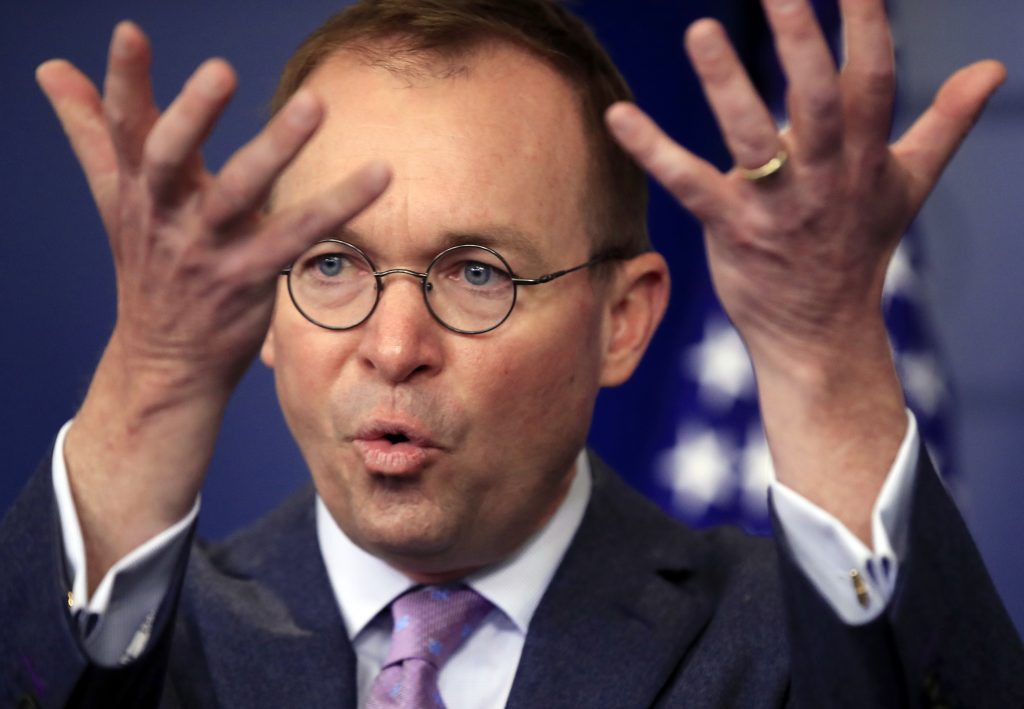 President Donald Trump cast doubt on whether he would back the massive spending bill needed to avert a government shutdown Friday, saying he was “considering” a veto over concerns about a program protecting young “Dreamer” immigrants that he ended and money for his promised border wall.

Hours before funding for the government expires and with Congress already on recess, Trump said on Twitter that he was weighing a veto “based on the fact that the 800,000 plus DACA recipients have been totally abandoned by the Democrats (not even mentioned in Bill) and the BORDER WALL, which is desperately needed for our National Defense, is not fully funded.”

The tweet was at odds with what top members of Trump’s administration and House Speaker Paul Ryan said Thursday, and with a formal statement of administration policy, which said Trump was supportive of the measure.

It came hours after the Senate early Friday morning passed the $1.3-trillion spending package aimed at keeping the government open past midnight. It was not clear if Trump was serious about following through with the implied threat. With Congress already out of town, the government will head toward a shutdown if Trump does not sign the bill Friday.

Trump has been increasingly frustrated with the media coverage of the bill, as conservative lawmakers and other critics have railed against it on cable news and in private calls. Several advisers inside and outside the White House characterized the surprise tweet as Trump blowing off steam and said they still expect Trump to sign it. The advisers spoke on condition of anonymity to discuss private conversations.

Still, Trump’s tweet was cheered by the conservative House Freedom Caucus, which voted against the spending bill along with two dozen Republicans in the Senate.

Rep. Mark Meadows, R-N.C., chairman of the Freedom Caucus and a friend of the president, said in a tweet that the group would “fully support” a veto, adding that Congress should pass a short-term budget resolution while Trump and congressional leaders “negotiate a better deal for the forgotten men and women of America.”

Sen. Bob Corker, R-Tenn., also pushed Trump to veto the bill. “Please do, Mr. President,” he tweeted. “I am just down the street and will bring you a pen. The spending levels without any offsets are grotesque, throwing all of our children under the bus. Totally irresponsible.”

The Senate passage of the bill averted a third federal shutdown this year, an outcome both parties wanted to avoid. But the budget-caps-busting deal drew serious conservative opposition. It also failed to resolve the stalemate over shielding young Dreamer immigrants from deportation after Trump’s decision to end the Deferred Action for Childhood Arrivals program last year.

While Trump has repeatedly criticized Democrats over DACA, he canceled the program last fall, ending the issuance of new DACA permits. A judge has forced the administration to continue issuing renewals.

The spending package includes $1.6 billion for Trump’s long-promised border wall with Mexico. But less than half of the nearly 95 miles of border construction that have been approved can be spent on new barriers. The rest can only be used to repair existing segments.

The money was far less than the $25 billion over 10 years Trump had asked for as part of a last-ditch deal that would have included providing a temporary extension of the DACA program. White House budget officials have nonetheless said the funding was a win.

“We ended up asking for 74 miles worth of wall, we get 110. Not exactly what we wanted where we wanted,” said budget director Mick Mulvaney Thursday. “But generally speaking, we think this is a really, really good immigration package,” he said.

Trump, meanwhile, has tried to pin the failure to reach a DACA deal on Democrats, arguing that “they don’t want DACA” and are merely trying to use the issue as “a political football.”

One Democratic aide said Friday they believed Trump was just trying to get a reaction from Democrats, while another predicted that Trump will ultimately sign the bill. The aides asked not to be named in order to speak frankly.